we'll take a cup of kindness yet 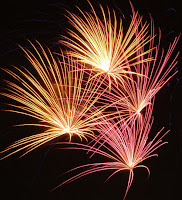 It's sort of an extra special New Year's Eve to me, as I view it as my Christmas and New Year combined into one evening. I really have a very limited memory of Christmas, due to being hopped up on muscle relaxants at the time. I remember throwing a turkey into the oven and that's pretty much it for the next week. I'm told our tv broke down temporarily and we opened presents, but all I remember is continuously wiping drool off my chin, while reminding myself to blink now and then.

So, as I said, tonight I am celebrating the joy of my family. So far tonight we have lounged about on the living room floor whilst watching the Radiohead New Year's Eve podcast on my laptop, which translated into squinting at a 2x2 inch square of cyberspace, whilst nibbling on bacon-wrapped scallops, veggies and cheese. 'Twas truly glorious. And we still have a whack of king crab legs to gorge ourselves upon later this evening.

Plus we took a run down to the best video store in the city earlier this afternoon, where we picked up enough fine viewing to keep us out of the daylight for the next several days. This is what we have on tap, if anybody wants to head up here to snuggle up on the couch with us for the next few days:
The Clash - Westway to the World
Wilby Wonderful
La Mala Educacion
Let's Rock Again (which we have wanted to rewatch for years!)
Jesus Christ: Vampire Hunter

Naturally, the Resident Offspring (film auteur) picked 99.8% of the titles, but come on, we won't have to go outside for days! Who's game?

However you end up kicking out the old year and welcoming the new, I want to wish you all the best for the next 365. I love you all. Bless your furry little hearts.
Posted by Barbara Bruederlin at 7:00 pm

Email ThisBlogThis!Share to TwitterShare to FacebookShare to Pinterest
Labels: a zombie new year, what are you doing new years eve?

Hey, I brought some homemade tortilla chips & a most excellent salsa for couch night... can I come over, too?

ENJOY the evening & bliss yourself out tonight, Barbara. Oh, and happy new years!

And we're watching The Waitress and Superbad. And preparing some lists.

Linds went to see Juno tonight so Ty, Fiona and I are here alone. Playing crib, poker and eating the "Tino's Family Feast" that we picked up. And I just had a nice surprise phone call from Mel...she's such a sweetie. Made my night.

All the best to you and the rest of the Zombie household. Please check in when you come up for air.

Happy New year to you, Jerry and Eva as well. :)

That all sounds quite fab! I'll have to see if I can catch the Radiohead podcast today.

Our dinner party turned out great, I am still full. We wandered down to see some fireworks, while carrying sparklers of our own and then called it an early night. Twas raining and we were all tired from traveling. Was really glorious to wake up at noon today, not hungover.

Hope you all have another relaxing day. Happy New Years!

And now my heart is fur. Happy Family Day/Night/Year!

Happy new yer to you my friend! I'm a better monkey because I know you. Thanks for all the great blogging you do!

I've cleared the best spot on the couch for you and your homemade tortilla chips and salsa, Michelle. We shall watch movies till we go blind.
Happy New Year to you and your lovely crew too!

I must get back to preparing my lists too, Teddy. I have been neglegent this year.

You crab leg awaits, Deb.
You do up New Years in my style - low-key! It sounds divine. And how nice that you got a call from Mel!

Thanks Jas. I hope it's a great year for you.

I hope you can catch the podcast at some point, Al, I wish I knew when they were replaying it.
Your new years sounds perfect. Sparklers are always great, we made do with 7 year old noisemakers that didn't really make much noise anymore. Although I did hear someone set off firecrackers as I headed to bed at 12:10.
Glad you were home for New Years!

You have one of the furriest hearts around Dale!

And to you Justrun! May it be a great year.

Sounds like a great time. Happy New Years and thank your lucky stars it's not Jesus Christ: Zombie Slayer that you'll be watching.

We also got Westway to the World as a gift this year, from Splotchy and MizSplotchy. We haven't watched it yet because we've been hypnotized (pleasantly) by watching our youngest play video games.

Happy new year to you and Wifey as well, Just A. I think JC Zombie Slayer might be the sequel.

Happy new year to you too, Bubs et al! I think we're going to watch it tonight, as we don't have any video game players to be hypnotized by.