Twelve days of the living dead 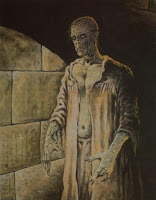 Here are a few Christmas facts you may not know about zombies:

1. Zombies favour Christmas trees with personality, and purchase the Charlie Brownest tree they can find every year. This is always done on the second Saturday of December, and it is then decorated the next day, while Bad Tempered bakes a big batch of nuts and bolts and drinks sherry.

2. Zombies are very focussed shoppers and can purchase the above tree, along with several arms full of cedar, fir, and spruce boughs, and an entire winter's supply of cranapple cider mix in 10 minutes flat.

3. Although neither Bad Tempered nor her lovely husband were raised with the idea of Santa Claus (both families observing the European custom of opening presents on Christmas Eve), the Christmas stocking has somehow insinuated itself into the Zombie household and now insists upon being filled each Christmas.

4. The Zombie family has adopted the Polish tradition of dining on brains fried fish and perogies on Christmas Eve.

5. It was Zombie tradition to play road hockey and drink beer on Boxing Day, but this custom seems to have fallen by the wayside in recent years. This has been largely replaced by endless and often violent games of crokinole. One rule which must be strictly adhered to in the Zombie household is that at least one bum cheek must remain on the chair seat at all times.

6. Christmas films which must be watched in the Zombie household are: A Christmas Story, National Lampoon's Christmas Vacation, and How the Grinch Stole Christmas (the Boris Karloff one).

7. Each year for the last four years, the Zombie household has received a mysterious parcel in the mail, around the end of November. The postmarks have been varied, and the only message the parcel ever contains is a kidnapper-style note. The first year it read "On the first day of Christmas my true love gave to me a partridge in a pear tree", and it contained a lovely partridge in a pear tree ornament, quite large. We now also have two turtle doves, three french hens, and four calling birds. This year Bad Tempered is really hoping it will be Gwyneth Paltrow's head, but suspects that they may get five golden rings instead.

8. A lighted reindeer named Norman usually graces the front lawn of the Zombie house during December, but Bad Tempered fears that the ground may be too frozen this year to fasten his little hooves down. The spousal unit, however, insists that it can be done.

9. Although Bad Tempered has many Christmas cds, including The Academy of St Martin in the Fields performing The Messiah quite brilliantly, the rest of the family will only permit her to play them during tree decorating and present opening. And even then they complain. Especially when she sings along.

10. Over Christmas, the Zombie front porch is decorated with an old toboggan leaning against the wall, surrounded by big pots of tree boughs with old hockey sticks stuck into them. Bad Tempered likes to pretend she is in the Eastern Townships, although she has never been there.

11. Shortbread cookie baking always deteriorates into childish shenanigans in the Zombie household. During the decorating process, the Santa-shaped cookies inevitably end up with poopy pants, or with big boobs, or decapitated and spewing blood. The Zombie household watches too much South Park.

12. Last year, the Zombies started a new tradition of Pyjama Day, whereby they watched South Park dvds all day long, in their pyjamas of course, and then ordered pizza. This year it looks like The Office (UK) dvds will be heavily featured.

Pyjama Day is a tradition which is going to be observed FOREVER.

What seasonal traditions do you normal people maintain?
Posted by Barbara Bruederlin at 3:08 pm

Email ThisBlogThis!Share to TwitterShare to FacebookShare to Pinterest
Labels: also a bottle of brandy goes into each fruitcake, zombies do Christmas

I'm all about Pyjama Day, now and forever!

The hope for a Paltrow head made me snort so we're even (I hope).

One of my other traditions is to watch The Ref and to read Holidays on Ice.

Crokinole! Oh my, I have not played that in years!! That was big in our house when I was younger.

I remember you mentioning last year about the mysterious parcel. I am so intrigued. Post a little late this year?

I was thinking about adding The Ref to my holiday films, as Dale has mentioned above. Christmas Vacation of course will be forever my favourite.

This year will be about new traditions me thinks. But I will be keeping the tradition alive of opening one gift on Christmas Eve. This might be problematic on a student budget.

i'd be hoping for real 24K gold rings. and then i'd cash them and spend all the money frivoulously on cds, metallic sharpies and cupcakes.

one of my traditions is making my annual christmas cd. which i will hopefully finish tonight. which is usually made will high on shortbread, chocolate and baileys.

zxbow is my word verification. perhaps that will be my new blogger id.

Oh I forgot I always like to read a bit of Bridget Jones' Diary at Christmas, Dale, the bit about Geoffrey and Uma's New Year's Eve Turkey Curry Buffet.
And The Ref! I keep forgetting I want to rewatch that too. This Christmas, fo shizzle.

You will certainly be starting your own traditions now, Al, it's exciting to do that, but one does sometimes long for the old ones too.
We like to open on present on Christmas Eve now as well. Christmas morning was always a trifle anticlimactic when I was a kid.
I will keep you posted on both the crokinole tournament and the head in a box opening.

I had "desspot" for a wv earlier, 668, which I also thought was pretty fine.
I'll tell you, if there are any real gold rings in that box, there will be cupcakes, oh yes, and cds, never fear.
ANd now I wish we had some baileys in the house.

I love how the Zombie's do Christmas! The mystery parcel sounds so cool. Dale just reminded me, I need to find a new copy of The Ref. It's a great flick to watch during the holidays!
I remember my parent's playing Crokinole, but I've never played it myself.

The only traditions I can think of off hand are making Christmas mix Cds and ripping open all our gifts at midnight haha!

I haven't been home for Christmas since 2000, but when we were kids, we always went to my stepgrama's house for Christmas eve, watched Yogi Bear's 1st Christmas, and had homemade cabbage rolls, clam chowder, and cinnamon buns. YUM!

I love pajama day. I must do that! I have two sets of Pinky and the Brain I haven't watched all of. That will do quite nicely I think :O)

Oh, and Turkey Curry the day after Christmas! How can I forget that! That tradition started about 3 years ago. I highly recommend it!

I'm sorry, but I'll be back, I lost it at "Charlie Brownest tree". Funny.

Turkey curry sounds like a heckuva good tradition to get into,Mel, although I would end up calling everybody Una, I am sure.
Pinky and the Brain videos would be brilliant for pyjama day; you have the zombie stamp of approval on those. Also Christmas mix cds, although I am thinking of stealing that idea and making some new years mixes. Interested in one?
What intriguing Christmas Eve dinners you had as a kid. I am now officially starving.

You should see the tree, Just A. Your tree would laugh its head off at our tree.

My work here is done then, Dr M. Because lord knows you never seem short of inspiration. Looking forward to reading what the monkeys do each year. I suspect a bit of poo flinging will emerge.

We may well have been separated at birth, Deb.

I'm emailing you a copy of my parent's Christmas tree from last year- no one out Charlie Brown's my parents.

And I'm with you all the way on #6, my only addition is the Muppets Family Christmas.

And how Christmasy is it that my word verification for these comments say "joyoaxek"- I think it's Croation for Peace on Earth.

Your parents are crazy, John! And I mean that as the highest possible compliment. Now THAT is a Charlie Brown tree!

Oh yes!! I would be very interested in a New Years mix!!! *bouncing up and down*

The Christmas Eve meals were amazing. My stepgrama used to be a banquet chef, and always made enough Clam Chowder, cabagge rolls, and bread and cinnamon buns to feed an army! Everyone would go home with a few huge boxes full of leftovers, along with jars of home canned dill pickles, beets, jam, and whatever else she had in her root cellar :O)

I forgot one other thing about Christmas eve at Grama Bloors...she had great hardwood floors, there were always so shiny and slippery, and my sister and I would run and slide across the floors from the dining room, through to the living room for hours! WEeeeeeeeeeeeeeeee

That settles it then - new year's mix shall be made, Mel.

I am starving reading about your Christmas meals, and what a better way to wear it off than skating in the living room. I love doing that!

I am trying to think of my favorites songs that came out in 2007 to make a mix too Barb. I do tend to listen to a lot of old Bluesy stuff, so it will be tough. The White Stripes Icky Thump has been a huge fav of mine this year though...that's a start. I can't wait to see your New Years mix Barb. Ok, I have a breakfast to go to (up at 5am) I better get my ass to bed! ninight!

Well our tree tradition around here is to go to the tree place fully intending to get a smaller tree and ending up with one that's much too big. Then the kids "help" me decorate it for the first 15 minutes or so, and I finish the job off and have a drink. The fun starts tomorrow, want to come?

There is room in the world for all manner of mixtapes, Mel. It's gonna be good.

The drink part sounds good, Maureen, but the tree decorating bit sure gets old pretty fast. Especially, as you say, since the kids put up 3 ornmanents and then wander off, never to be seen again.