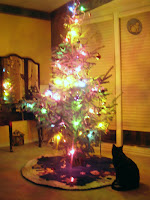 So that you can share in the overwhelming excitement that goes into decorating our tree, I am live blogging all the action in the Zombie household this afternoon.

2:30 pm - tree has been erected in its stand and the cat is sitting guard in much the same position as she is in this photo from last year. I think this year's tree is slightly less Charlie Brownish as it doesn't appear to have any large gouges taken out of it, and it is rather straight, but we shall see as it finishes unfurling.

Nuts and bolts have been in the oven for an hour and I have just poured the first glass of Harvey's Bristol Cream. Eva has just come downstairs, homework in hand, and Jerry is has been trying to unravel the new strand of lights I picked up on Friday. Please god let them work.

Photos will be forthcoming.

3:00 pm - lights are attached and do indeed work, but they were a 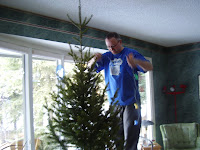 son of a bitch to put up. I think I gave myself an aneurysm. But at least we did not put up an old set that doesn't work, as we did a couple of years ago. I almost hurled the tree through the window that year. Is tree decorating supposed to be so confrontational?

Sputnik is eating the tree. Must put a stop to this, and get a second glass of sherry. Supper could be a little drunk tonight, if this keeps up.

3:50 pm - tree is nearing optimum decorativeness. I am considering a third glass of sherry, and the nuts and bolts will be done shortly.

I remembered a funny passage that I recently read in Please Kill Me, and hauled the book downstairs to read to everybody about Jayne/Wayne County telling the story of her mother turning fundamentalist and fighting with his father about decorating the Christmas tree. The poor kids were caught in the middle and were left pleading "please don't make us decorate the symbol of babylonian evil!"

Eva then figured we needed to hear a few passages from Good Omens by Neil Gaimen and Terry Pratchett. NOT Christmassy, but entertaining nonetheless and besides she had a captive audience. Sort of reminds me of a Tom Robbins book, so I may have to read it. 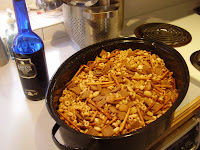 Then a big discussion ensued about Tony Dekker's (Great Lake Swimmers) new state of beardedness and whether it made him look like a Hutterite, which he may very well be, as Dekker is certainly a Hutterite surname. See, we do discuss the big important subjects like religion and such here. It's not all South Park and Thom Yorke as an old man, you know.

Nuts and bolts have obtained crispy goodness.
5:00 pm - done! The tree's gaps are now fully evident as it has finished unfolding, and its Charlie Browness is no longer in dispute. Here's a pic of the end result. Please note the presence of the Gwyneth Paltrow head-containing mystery parcel, which is the only present currently residing in the Zombie household.
. 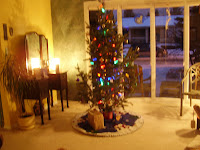 Sputnik hates the new Christmas lights, as she got her head stuck in the box in which they arrived, and she got all embarassed when we laughed at her. She will inflict her revenge by knocking down the ornaments which are on the lower branches, which is why we put the non-breakable ones down there.
I am getting a headache from the sherry, so this third glass will be my last. The mantle and the front porch will need to wait for another day.
This concludes the live blogging of the decorating of the Zombie Christmas tree. I have a whole new respect for journalists now. It's hard work.
Posted by Barbara Bruederlin at 2:21 pm

Tree decorating is always confrontational at my house.

I however don't believe that it only took 30mins to untangle and put up the lights? Suspect.

All you tree people are really making me want to decorate mine. Dang it. :)

And the nuts & bolts sherry combo for the win.

Hahaha!Cat's and trees don't mix, but they are damn funny to watch. Hey, my mom and I have shared more that a few bottles of Harvey's Bristol Cream! Oh I miss my mommy all of a sudden!

OMG... Schultz might be dead, but Charly Brown LIVES!

Ti and Ellie and I did ours last night. I've gotta say that it was way simpler before girl. And girl. I want my tree like I want my tree, and now I must... gasp... compromise.

And as I learned in edjumacashun skul, compromise is a lose – lose situation.

I love that tree! Looks great, remember to give it lots of sherry too.

Jayne/Wayne County wrote a book? All I really remembered was the song 'If you don't wanna fuck me baby fuck off'. I'll look it up.

Please tell me Paltrow is indeed in the box.

What a wonderful account of a day well spent.

I notice that the last picture, of the completed tree, seems somewhat blurred by a slight...intoxication. Perfect.

We decorated our tree today, which of course included the ritual of going out for new lights because none of the ones from last year work any more.

Oh, and it's funny you mention "Please Kill Me"

I read that over the holidays two years ago. Splotchy gave it to us as a Christmas present. Perfect holiday reading, isn't it?

Aha, these were brand new lights, Al, hence they were still nicely unknotted and not too tangly. Would I lie to you?

No point in fighting it, Justrun. That tree decorating virus is gonna getcha sooner or later.

Best to wait until you have the proper fuel before tackling that baby, Deb. Tree dressing cannot be done stone-cold sober. Doesn't work.

It's tasty tasty stuff, innit, Mel?
Sputty's pretty good around the tree, mostly just likes to lie on the tree skirt, but occasionally, those low hanging ornaments are too tempting.

Oh sometimes, you just have to let go of the controls a bit, Teddy. It get less painful each time and before you know it, you are walking right past the piles of clothes on the floor. But I guess we are now talking about something else.

S/he didn't write this book, Dale, but s/he was quoted in it quite a bit. The Christmas tree story just fit in so well with the spirit of the day.
We're not going to open the box till Christmas, but will keep you informed.

Well with me you never know if it's intoxication or lack of photographic skills, Bubs. This time it could very well have been both.
Great day for tree decorating, wasn't it?
Although I started Please Kill Me a few weeks ago, it is a great holiday read! And damn, it's funny and outrageous!

You always, ALWAYS, check the lights before putting them on the tree. Methinks you and Zombie husband were distracted by the sherry and smell of nuts and bolts. Hmmm, wondering if Zombie will share recipe...

I can't put presents under my tree as Anubis and Nero will rip through the paper and expose the inner goodness to one and all. They have no patience.

We had even forgotten that we had bought new lights that year, Karen, which made it all extra infuriating.

Sputnik is actually really well behaved around the tree and presents. I think she is jonesing for a great guft.

There are more bulbs on that tree than branches. Well done!

I know have had Good Omens recommended by two trusted sources, Phlegmfatale. That obviously must go on my to-read list.

hahaha that's pretty much true, Beckeye. They are kinda big honkin bulbs though.

you tree's "Charlie Browness" - that is a christmas classic that I will treasure always.

It's just not a real Canadian Christmas without a Charlie Brown tree, Gifted Typist. Who knows what we would have done if Schultz hadn't invented the idea.

I do believe I swiped the idea from you in the first place, Just A, when you live blogged Hallowe'en. You opened the floodgates with that one.