I'm not stuck in the tardis anymore 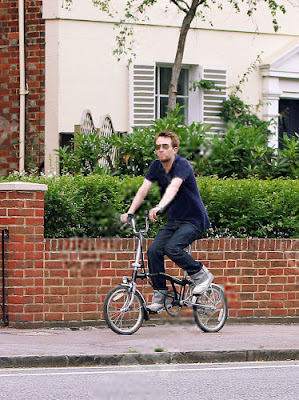 This is Thom coming back from the post office after mailing my discbox.
.
Which arrived today!
.
Two discs, two records, a lyrics book, and an art book, all in a big solid package that looks as though it will withstand a nuclear attack.
.
It's Christmas come early around here. 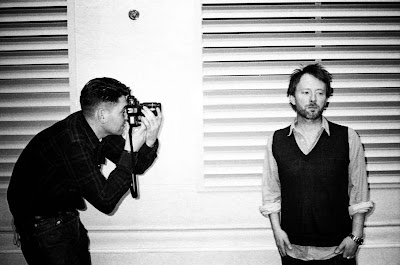 (How can you not love that furry little face?)

You know you are dealing with a pretty decent band when a song like Four Minute Warning gets relegated to the b-sides disc. I've been listening to a bootleg concert recording of this song for a year. It was worth the wait.

Email ThisBlogThis!Share to TwitterShare to FacebookShare to Pinterest
Labels: In Rainbows, it's like a mini-Christmas, the most important band in the world

I love how you found a picture of Thom riding a bicycle. Honestly. Priceless.

I am glad to hear the parcel arrived, and I am sure so are your ears! :)

My ears are thrilled, Al!

I have it on good authority that is the actual post post-office photo. I believe that Thom is documenting the journey of my personal disc box. They're going to make a film about it.

Do you get to star in the film? I think you better start writing up your rider with lists of demands such as cameo roles for all your friends! Happy listening.

Cameo roles for everyone, Toccata! And no brown smarties!

ohhh Lucky!! Mine hasn't arrived yet... I'm keeping my fingers crossed that Thom will show up at my house on his bike sometime this week :)

It's a bit of a bike ride up highway 2 there, Stephanie, but I am sure Thom will be arriving momentarily. I would imagine Colin and Jonny are doing the main camera work for the doc, as they seem to be the resident photographers. And they seem like nice guys, so I am sure they would be thrilled to have you aboard to lend your camera skills.
You could take them all to the mall!

Look out Thom, someone's trying to shoot you!

Thanks for the tune!

Stop feeding Thom's paranoia, Dale! He's quite good at that on his own.

I hope you like the song, though, speaking of paranoia. I cannot stop listening to it.

Yay! I'm very happy for you Barb!
That picture of him on the bicycle is great!

No brown smarties? No red ones either then.

I thought he was running to deliver it!?! What a cheater, using a bike.

Well, whatever...happy early Christmas to you.

I was rather shocked by the lack of helmet, Mel. I just hope his kids weren't watching.

But we need the red ones to lick and make lipstick out of, Toccata. Did you used to do that as a kid too?

Thom's all about speed, Beckeye. Normally he would have done the Forest Gump thing, but he knew I needed this before Christmas.

And not a minute too soon, Dr M. I thought I was going to be forced to go hunting for brains instead.

Tom does have a little mole face and what is up with that lame bike? Lucky he's so talented.

Okay, the bike is pretty compact compared to those big hummer bikes you are used to riding around, I'll give you that, Just A, but "mole face"? That tears my heart to shreds, it's a beautiful face.

Not ordinarily attracted to Puck-ish men, Thom's a hot one. I'd definitely hit that. Spank the shit out of it, in fact.
(do you cringe when I wax potty-mouthed in your comments?)

hahaha, Phlegmfatale! Nor am I, but yes he is, so would I, and no I don't. In fact you are hilariously refreshing.

Please do give us the review of it all...

I will have to do a proper review, Will, instead of just OMGing all over the place. They have confused me with giving me half the music in October and the rest in December, though.