things I learned from my brother 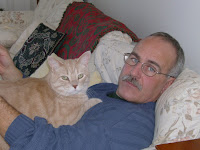 He sure is a lot of fun to have underfoot, and the week went by far far too quickly.

Being his little sister, I have always looked to him for direction in life, okay well that's a blatant lie, but perhaps I should have because he taught me a wealth of skills this past week. Such as:

1. how to choose appropriately manly birthday presents for my husband.

2. that we have a karaoke channel on our tv. Who knew? And Bruno and Eva could have been YouTube stars if only I had been thinking enough to capture them droning their way through Desperados. (Bruno, we told you ABBA, not Eagles!)

3. check to make sure that your sibling who has the same initials as you has not already used those initials on the Grey Cup football pool board before entering your own. Somehow it never ocurred to either of us that the other would use their own initials. And since BB cleaned up in 2 of the 4 categories, we had to split the winnings (although I maintain that it sure looked like my handwriting on those winning spots).

4. that the mighty Bow river begins near Lake Louise and ends at the Old Man river.

5. how to shop. Frightening, I know, but mon frere appears to be a shopper (although he claims to be a purchaser, rather than a shopper). I would ask though, what you would call someone who can spend 6.5 hours in IKEA? I did come home with a lovely set of comfortable and sassy kitchen chairs to replace those backbreaking and squeaky old church basement chairs we had been using lately. And no more sticking my fingers through that hole in the tip of the oven mitts. The bank account will just have to suffer for a while.

6. that there are all kinds of really cool birds around our place, including bald eagles, and he knows how to identify them.

7. that a week is not nearly long enough to talk about everything.

8. that the house became unbearably empty after I took him to the airport. I'm actually really glad to be going to work tomorrow.

UPDATE/CLARIFICATION:
We spent a mere 4 hours in IKEA yesterday. The 6.5 hour mega-trip was made during a previous visit and without the presence of any zombies.

Bruno wishes to tell the world that he does not drink a lot of coffee. So there must be some other explanation for the four-fold increase in household coffee consumption during his stay.

And when Bruno drinks coffee, he finds that people don't listen fast enough.

But enough about me, how have you been? I am now coming to visit you all because I have so missed your pithy and pertinent observations during my blog hiatus.

Posted by Barbara Bruederlin at 12:44 pm

Email ThisBlogThis!Share to TwitterShare to FacebookShare to Pinterest
Labels: family - you can't live with em you can't shoot em, not all company is like fresh fish

I'm glad to see you back my little zombie friend. And I'm even gladder you had a good visit with your big brother.

I'm so glad to hear you had a lovely visit with you brother.

I am however gobsmacked that you spent nearly 7 hours in IKEA. I don't think I could do that, ever. I hope some of that was spent eating at the restaurant thingy.

And welcome back, you were missed :)

i am floored by the ikea trip.

Sounds like a lot of fun with your brother... and 6.5 hours in IKEA? how did you survive? But I'd say that with someone that you get along with, it's easy to spend that much time there.

Thanks, Dr M! I'm glad to be back too.
My bro is the kind of person who, if someone told you they didn't like him, you would know there was something seriously wrong with that person.

Good to be back, Splotchy! Spread some love at the concert tomorrow, will you?

Oh dear, I was misleading in that IKEA statement, Al. I blame it on not having written anything for many days. We actually only (only! ha!) spent 4 hours at IKEA; the 6.5 hours mega-trip was one he made with his wife a couple of years ago. It was scary.
We did go to the restaurant thingy. And ate meatballs besides.

I was floored by how much money my so-called brother forced me to spend, 668. But now I am good for another 3 years.

I have to admit I love the little rooms, Evelyne. I always fantasize living in one of them.
You really do need to go with someone fun, someone with whom you can put greasy fingerprints on all the stainless steel appliances and such.

Glad you had such a great time with your brother and lernt all kinds of things. The only way I'd spend that much time in Ikea is if I couldn't find my way out again, which usually happens.

John Mutford said...
This comment has been removed by the author.
8:26 pm

I've never set foot in an Ikea. Nor do we own anything Ikea. I don't have any judgement on Ikea one way or the other, I've just never lived anywhere near one. Aren't they all in Sweden?

I always get trapped in the little kitchens or someplace similar, Dale. I try to follow the floor arrows, I truly do, but then inevitably I look up and there is an army of shopping carts bearing down on me and someone has switched the direction of the arrows again.

No, they just make you think you are in Sweden, John. My house is full of IKEA stuff, to tell you the truth, which is why I hadn't been there in a couple of years. And I thought I was outgrowing semi-disposable Swedish furniture, but apparently not.

Wow that sounds like a great week. It's nice to see someone else enjoying their family.

Family can be pretty great sometimes, Bubs, even if they do remind you of yourself too often.

Sounds like your brother is super awesome. Did you get along when you were younger (kids/teens)? My brother and I did as young kids, not as teens, but became friends again as adults. Now, he's my own mini version of Bruno.

Isn't it great to have family visit?

I'd think that after one 6.5 hour IKEA trip a person would be done for life. So you know . . .another 4 hours?

I experienced IKEA for the first time a month ago. Wow, the stuff. Did see a chair for my studio that is a "must have."

Brothers - Yay! I am hoping mine will win a bid for a job near here so he can live with me for a few days while working.

Bruno is such a super manly name. I hope you treat it with the respect it deserves by always addressing him thusly, "YO, Brun-O!"

Awww a mini version of Bruno sounds great, Karen. Your brother must be awesome.
Oddly, we always got along even after he tied me up under the back porch all afternoon when we were playing prisoner of war. And then he taught me to drive.

I would make the same assumption, Just A, but I guess some people will do anything to prove us wrong.

I really hope your brother gets that job too, Leazwell. Nothing like being able to spend some time with family. FIngers crossed for you.
You really need to get that chair for your studio. It's always the right thing to do.

He really is, Justrun! But don't tell him I said that.

Thusly is such a boffo word, Beckeye! And how did you know that's how we always address him? It's only natural, I guess.

What a wonderful tribute to your brother...I'm so glad you got to spend time with him. Especially after the ordeal he went through recently...I'm sure you're appreciating him that much more. Nice for you to have some "relaxing" time together. Although a 4 hour purchasing meeting at Ikea could get a little hairy.

It was a really great visit, Deb, even if he cannot karoake worth a damn!

he's handsome, your brother is.

Yup, he got the looks in the family, PF.

Yay, you iz back!! I could totally spend 6.5 hours in IKEA...they even have a place to eat lunch.

Glad you enjoyed your visit with your brother. Devon's coming to stay for the holidays from Dec 22 to Jan 5th. Visits always seem too short!

Visits are always too short, Mel and I'll bet your time with Devon flies by. Sure hope you guys have fun.
Tell you what, next time Bruno feels the need for a 6.5 hours IKEA trip, I'll tell him to give you a call.