So you've got the Dia De Los Muertos blues 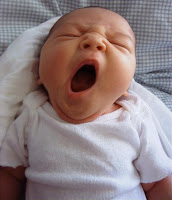 Sugar crash. Spare tire-induced self-loathing. Hallowe'en is a tough holiday to come down from.

So I'm going to the internetz. They got some crazy shit on that internetz. Like this. I was told that she actually said "Morrissey sucks a mean cock", but I guess that's pretty close.

And oh looky here - Radiohead has signed a deal with XL Recordings for the conventional release of In Rainbows. No word yet on the release date, but that's okay with me, because I know I will be getting my shiny new boxset in early December!

The only thing that could top that is Thom dancing, so here you go. Check out the booty-shaking on 15 Step:


Or if you would prefer to be mesmerized by Jonny's hair (such shiny swaying hair), try this clip of Bodysnatchers:

Posted by Barbara Bruederlin at 5:00 pm

Email ThisBlogThis!Share to TwitterShare to FacebookShare to Pinterest
Labels: day of the dead is right, that is some premium dancing, the most important band in the world

"Hallowe'en is a tough holiday to come down from"

Then don't! Take another hit of the sweet stuff and make Halloween last all week.

At least you have the Office to brighten the day soon. I'm listening to some Jarvis Cocker right now, he's quite addictive.

Best advice I have had all day, Just A. I am going to flush those little chocolate bars out from where I hid them from myself right now!

I'm eyeing up a Mr Big myself, Al. Yes, of course, the chocolate bar!
I listened to Jarvis on the way home from work today! What a real nice guy he is.

Don't you just hate how this year's crash from the sugar high also came alongside a new comprehensive report about how the big C is going to really get you if you have even the tiniest bit of extra body fat! Great, I really don't want to listen to this new study while snacking on licorice and chocolate.

I am so over the chocolate thing right now...tomorrow may be another story, though.

In unrelated news, I saw your post about the stage version of Hedwig & the Angry Inch happening in your town. I got to see it out here in LA - great, great fun. Donovan Leitch was Hedwig and Bijou Phillips was Yitzak. Sugar Daddy, bring it home!

Their timing is exquisite, Toccata. If fact it makes me declare "what's the use then?" and tuck back into that bag of leftover candy.

Hi Moxie, welcome! I've still got the chocolate hangover going here.
I am really pumped for Hedwig! Here at the Sage Theatre production, Hedwig is going to be played by Gregory Ewart who was so outstanding as Renton in Trainspotting last year. It should be amazing.

I can't stay away from the Tootsie Rolls.

Do you have an MP3 of your beloved Thom singing "Be Mine" with my beloved Michael? If not, I need to get a copy headed Calgary-way.

I don't, Beth, although I would love to hear it. Thom loves Stipey, you know, and I believe learned how to dance from him.

I've alsways said, they should have halloween for adults.

Instead of bags, we use glasses.

Instead of trick or treat?
We say rye or whiskey?

It's a community builder.

Not like holloween, which only encourages kids to find their inner-hobo.

Exactly, Jetson, only instead of rye or whiskey (aren't they the same thing?), I would say red or white. And never mind the glass, the bottle will do.

Oh, Morrissey. If I were in the opener's position, I'd find it very difficult to restrain from saying anything.

This is my first Halloween without eating more than 3 pieces of candy! Partly due to attending Bright Eyes, partly because I missed out on the whole Halloween spirit thing. Maybe next year...

You know, I find that a little ironic, actually, because I would have thought that of all artists who would have a sense of humour and see the playfulness of the irreverent comment, rather than to boot off the opening act. Or maybe there was a subtext between she and he and that was the final salvo? I mean, that comment doesn't seem like that big a deal, to me. Especially to a guy who wanted to bash every tooth in someone's head, at least metaphorically.

This next bit is nasty and my dad reads my blog and I don't want to have to 'splain what "rim" means, so I'll post it over here hoping you'll squeal with delight.

On the "Giving Until it Hurts" tour (at least I think it was that show) I saw Sandra Bernhard in Dallas, and some asshat in the audience kept interrupting her (very linear, scripted) performance by asking her to tell about Madonna. Really, it got old muy pronto. Finally Sandy addressed him directly and said "look, I'll give you her number and you can call her up and fucking rim the bitch." The audience cheered and asshat shut up. It was one of the best dressing-downs I've ever seen.

Wow. Why don't I start a comment with an incomplete sentence? Anyway, was saying, of all artists, I would have expected Morrissey to shrug that off as not a big deal at worst, and actually to have been amused by it, at best.

Conor didn't throw out candy to the audience, Hilary? How rude!
Fear not, though, there was more than enough candy consumed in this house to keep the universe in check.
Did you write about the Bright Eyes concert? COming over to check!