Things like Thom's head in a box. Plus Joy Division and Bjork covers.

Friday was a big night for Joy Division covers too, as the Plaza Theatre, where Control had its Calgary debut, hosted a Joy Division tribute night after the screening. Lots of local bands doing their patented Ian Curtis dances, I would imagine.

Meanwhile I ate those free little cranberry oatmeal cookies, which I chose over the free Bits and Bites. And I read Fight Club.
I am sorely tempted to circle all the clues in Fight Club that are so obvious once you know the ending. There are scads of them throughout the book. Do you think the library would get all bent out of shape if I did a little revisionism on one of their copies? 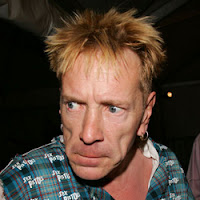 I also read the edition of Spin which celebrates the 30th anniversary of God Save the Queen. I have a great deal of admiration for John Lydon. I love smart men and he is not only whip-smart, but bloody snarky to boot. What a winning combination. Plus he bleats when he sings. He's been in great demand for hosting nature shows lately, swimming with great white sharks and the lot. Good combination, I say.
Did you know that he is Ari Up's (of the Slits) stepfather? She played the folk festival here a couple of years ago with Doublestanddart, an Austrian dub band. Because you know, when you think of Austria, you automatically think dub.
I'll leave you with Ari Up's stepdad's old band which isn't the Sex Pistols. It's the other one - Public Image Ltd.
Posted by Barbara Bruederlin at 2:29 pm

Email ThisBlogThis!Share to TwitterShare to FacebookShare to Pinterest
Labels: I could be wrong I could be right, Thom Yorke just turned down Paul McCartney's request to do a duet, yet another reason I love Thom

I'm not sure Thom's rebranding is much better. That is if I'm to judge based on his head in a box. He looks a little confused, but still kind of miserable.

Speaking of my boy Rotten, we also missed 'The Filth and the Fury' on IFC (aka the Sex Pistols doc I stayed up until 2 to watch last summer)

Where be the puppies and crazy old Polish ladies? The world needs to know.

Thom does have the patented miserable artist look down pat, Just A, but he can be surprisingly self-effacing and humourous as well. I think maybe he just needs to appear on South Park again. Oh, or Robot Chicken!

The Filth and the Fury was on Friday night too, Evasaurus? Damn, I missed it again!
Puppies and loony grandmothers coming up today, I pinky swear.

I flicked on a late night show the other night (I think it was Conan) and was quite surprised to see the boys doing Anarachy In The UK.

I lost what I was going to say reading Deb's comment of "Love a Johnny" :)

Hopefully you'll get a chance to see Control now! I have not read Spin in ages, I should get back on that. Also, need to watch this episode of South Park where Thom makes an appearance. Ay, so much to do.

"Love a Johnny Day" it is, Deb! I've marked the calendar. Do we get cake for that?

The episode is called "Scott Tenorman Must Die", Al. Is it sad that I know that? Not just Thom, but all of Radiohead are in the episode - it's pretty awesome and it shows Cartman at his most evil and psychopathic.

I know Fight Club's supposed to be a great book, but it's because of knowing the ending that I haven't bothered. Was it as enjoyable as you hoped?

It's funny, John, it actually made me want to watch the movie again. So I'm not entirely sure what that says about it. Or me. It's worth reading for the great quotes and I enjoyed it, but I don't know if it is that much of a different entity from the film (with a few highly notable exceptions).

It would be very Fight Club for you to customize the library's copy of FIght Club.

I'd love to eat the ass out of John Lydon. Can't get enough. Brilliant, and perhaps the only consistently honest person to survive in show business for more than 5 minutes in any of the last 100 years.

I consider it a mark of distinction that I recognized merely from the still that video was Rise. Saw PiL in concert at the Bronco Bowl when he was touring to support this album. Totally rocked. Totally.

I had the same reaction with Fight Club. You could circle all the clues in pencil. If the library doesn't like it, they can just erase it.

Hey, you're right, Phlegmfatale, that would be a completely Fight Club action, Now I am super tempted.
Well done recognizing Rise from the still alone. It's such a great song. And yes, while the Sex Pistols may have been a manufactured fashion statement, our man Lydon is and was the real thing. I can't even imagine how awesome the PiL concert was.'

Hi Eric Rosenhek, welcome! I'm glad it's not just me who has that urge to customize Fight Club. Those clues just sit there, out in the open and so tantalizing. I'd better return the book before I succumb to your goading.

I love that PIL song. Thanks for posting that video and bringing back some fun memories.

And I love your description of his singing as "bleating"

He pretty much does bleat, doesn't he, Bubs? My ever-vigilant child discovered that.

Rise is such a great song - I've been singing it all week, only I don't bleat so well.

I went to see PiL here years ago and Johnny kept getting mad at the moshers spitting up at him and threw his mic down midset and stormed off after cursing at everyone. The band played a few more notes and then got up and left.

You should have stopped spitting on him when he started getting a little pissy, Dale. Or taken him swimming with sharks, he likes that.

I think it would actually be quite in the spirit of Fight Club for you to tamper with a public copy of it.

I sort of wish I hadn't already returned the book now, Will. Tyler Durden would think I am lame.