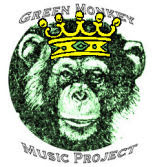 After months of grueling training and having finally proven myself worthy through a demonstration of my prowess at musical sanshou, I am pleased to announce that you are looking at the newest Green Monkey Master in Splotchy's entourage.

I wear the crown proudly (and it's so much easier now that we have fastened it with bobby pins) and vow to bring honour to this auspicious position. With great power comes greater responsibility etc etc.

The project theme this time was Speed It Up, and it was a challenging, but really fun, distraction from the mindless and soul-destroying boredom at work. So double thanks for keeping me from going postal at the office, Splotchy! The idea was simple in its eloquence: List 5 - 8 songs, each faster than the last. You can listen to everybody's mixes over at Splotchy's. Here's my list:

Saint You - the Constantines
This song is a bit of a departure for the hard rocking Constantines. Bry Webb really reigns in that amazing powerhouse voice of his on this simple acoustic tune. One time at a Cons' concert, as the band stood there drenched in sweat after a breakneck hard-driving set, somebody called out for this song, and Bry groaned at the thought. Those guys just can't slow down, which is what makes this song a rare and wonderful thing.

Drink to Me Then Babe - AC Newman
Carl Newman is better known as the frontman of the New Pornographers, of course, but he also put out a great solo album, The Slow Wonder, a few years ago. The man writes a mean pop song, and how can you resist a song that features whistling? I mean, seriously, it's right up there with hand claps and cowbells.

Belgium or Peru - Cuff the Duke
It's a little hard to include a Cuff the Duke song in a speed it up mix, as many of their songs do keep building on themselves, and even though this is one of those that do speed up considerably toward the end, I think it still fits into this spot in the list. A lot of the members of Cuff the Duke also play in the Hylozoists, which is a largely instrumental band. You can detect some hints of the musicality in Belgium or Peru that you would hear in a Hylozoists song .

Speak Slow - Teagan and Sara
Now we are starting to get into exercise mix speed; the rest of the songs are actually featured on some of my exercise mixes. Teagan and Sara are finally starting to get past being labelled as a "twin sister lesbian band" and are being recognised for their music. After all, when The White Stripes cover your song Walking With a Ghost, you should start getting some recognition, don't you think?

Private Idaho - the B-52's
The B-52's always bring me back to the crazy carefree days of university. They have yet to be matched for sheer poppy campy fun. A little Rocky Horror Picture Show for daytime. Private Idaho would also fit into a mix featuring songs which were used in movie titles.

Cheer It On - Tokyo Police Club
There is no excess fat in a Tokyo Police Club song. They are stripped down, raw, brief and so damned good. TPC are also a really fun band to watch, extremely energetic, interactive, and absolutely not precious in any way. They returned to the stage for an encore after less than a minute of listening to the adoring cheers. Gotta love a band that respects its audience like that.

Suspect Device - Stiff Little Fingers
A powerfully angry punk song (is there any other kind?) that perfectly captures the sense of growing up in one of the most violent periods in recent history. Whether you view it as a historical piece or just a damned good song, Suspect Device will always be relevant.

*
Since today is Canadian Thanksgiving, let's test your knowledge of Canadianity:
which are the Canadian bands on this list?
(bonus points if you are not a Canadian)
Posted by Barbara Bruederlin at 9:35 pm

All of them are Canadian except for the B52's.

Thanks for the descriptions, Barbara!

dr mvm, it's actually a trick question. *None* of the bands are Canadian except for the B-52's.

And I had no idea AC Newman was from the New Pornographers! A very nice song.

Well, if I can't win the bonus points...anyway, question has already been answered :)

I too am glad that Tegan and Sara are finally, finally being recognized worldwide. So Jealous is such a good workout album.

That crown looks purty on you, master. One day I will join your elite squad. Until then, I'm happy to swing from the vines with the rest of the chimps.

You are vewy vewy cwose, Dr M, but not quite.

hahaha Splotchy, you are so subversive! Almost as subversive as Carl Newman was when he went by his initials on his solo album. Sneaky!

Al! I can't believe I fooled you with this question. The question has been answered, yes, but so far, not correctly.
Now I wish I had gone to the Teagan and Sara concert a couple of weeks ago, but I was too burned out.

The rest of the chimps will miss your awesome swinger skills when you join us powerful apes at the top, Beckeye, but we will then be a crack team of Master music listers.

Thanks Berni, it was a good anniversary weekend! Any weekend featuring turkey has got my vote.

I should be shamed.

Whew! I knew it had to be an oversight, Al. My faith in humanity (and your Canadianity) is restored.

To clarify, I realize the B-52s aren't Canadian either.

I'm going to listen to Stiff Little Fingers now to make up for the oversight ;)

hahah near simultaneous posting there, Al.

You win! Something. I dunno, maybe the new Weakerthans cd if somebody in my family was paying attention to my wishlist? How does that sound?

Good point, 668, even though he could very well still be Canadian.
You deserve a prize for those sharp eyes though. Fire me an email if you want to claim one.

I feel like such a big swinging dick now, Mel!

Happy Thanksgiving up in CA land, baby! I hope the leftover turkey (as mentioned on Jen's blog) was deelish!

Well hurrah on the new crown, girl... bobby pins & all! I miss the bobby pins of old. Now they look like twigs sticking out of my hair. But that's not the point - you've been royalized! :D Big swig of chambeer to ya.

Oh, and Fight Club on your Autumn reading list? MUST. I saw the movie before reading the book (like Mystic River) and in a way, I wish I had done both tasks in reverse.

Congratulations on the crown! Coincidentally, I am in the market for a crown...but I had never thought to hold it on with bobby pins. Sounds intriguing. I shall mention this to the orthodontist on my next visit.

Oh man, the leftover turkey was the best thing in the history of best things, Michelle. haha here I am creaming about turkey to a veggie.
I've been wanting to read Fight Club for a long time. The Resident Offspring also informs me that the book and movie are way different. Much as Trainspotting was. Hey do you remember that Fight Club Lego site? THAT was weird.

Oh it's the newest thing in orthodontics, GOB. For the really tough crowns, they use barrettes.