my boyfriends, let me show you them 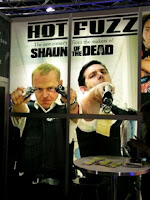 We rented Hot Fuzz last night. I'm still recovering and I had seen it before. But if there is one film that's even more fun the second time around, it's this one. And if you've only ever seen it in theatre before (as I had) you really must watch it on dvd, if only for the outtakes.

When I originally saw Hot Fuzz, I went into it already a convert, having been absolutely enamoured of Shaun of the Dead, and I couldn't wait to see what Edgar Wright, Simon Pegg, and Nick Frost were going to come up with. And where Shaun of the Dead was groundbreaking in establishing the genre of romantic comedy ... with zombies, Hot Fuzz is a very loving and rather authentic homage to the buddy cop film.
.

Hot Fuzz could easily have been a spoof of buddy cop films, poking fun at how ludicrous they are, but instead it celebrates the genre. It uses every cliche ever abused, but it does so knowingly, by making Danny Butterman, Nick Frost's character, a true buddy flick aficionado. The fact that Nicholas Angel, Simon Pegg's character, is a real life over-the-top overachieving cop, whom Danny adulates, authenticates the use of these cliches.

Pegg and Frost play up, ever so subtly, the homoerotic undertones that underlie most buddy cop flicks, and in the outtakes they have way too much fun with the concept. Last night I laughed so hard during the outtakes, particularly during the fork-in-the-eye ketchup packet takes, that I had a coughing fit and had to leave the room.

Now I really need to watch Shaun of the Dead again, too. I miss my boyfriends.

We've been quoting snippets from Hot Fuzz at each other all day long. Ever fired your gun in the air and yelled, 'Aaaaaaah?'
--

But now it's time to award this week's Labia Award to the label that best exemplifies the standards that we work so tirelessly to uphold.
This week's Labia is proudly offered to:
Dale
for his offering
"you can vote for Beckeye, Barbara or Splotchy but I wouldn't"
.
That's the spirit, Dale!
Way to keep pimping your blog on the bloginterviewer contest long after the rest of us have given up.
Posted by Barbara Bruederlin at 2:02 pm

Email ThisBlogThis!Share to TwitterShare to FacebookShare to Pinterest
Labels: awesome films, did you see how I subtly pimped my blog there?, he is not Judge Judy and Executioner, Labia Award

That sounds pretty funny. I haven't seen Shaun of the Dead either. I need to check them out.

My word verification is "hvweven"- it's so hard to say that without slipping into a Snagglepuss impersonation.

I have yet to see Hot Fuzz ... and I have no excuse. Do I need to hang my head in shame?

Those boys are just brilliant.

Both movies were such fun. Hot Fuzz obviously made the rounds this summer with my students for they like you have been quoting little snippets from it. You would be a hit with them I am certain.

Have you seen Fido yet? I think you'd like it. Now there's a movie with some good one liners.

I can not wait to see this movie. Knowing thatit made you laugh so much will make it even more enjoyable to me.

I still haven't seen it. Dang. But soon, I will.

It was hilarious but I didn't think it was as good as Shaun of the Dead. Hmmm, these outtakes sound entertaining...I may have to watch it again.

hahaha Snagglepuss! I am more likely to slip into Sylvester mode myself, John.
You really MUST watch Shaun of the Dead as soon as humanly possible!

What do you mean, no excuse, Beth? You are spending every other night single-handedly supporting the concert industry. But next time you want to cuddle up with a silly movie...

Maybe you'll get to know them personally now, Al and become besty friends. Good luck with the final leg of your move!

I've been wanting to see Fido for forever, Toccata! And not just for the zombie theme either, but because it looks brilliant.
It's hard NOT to quote Hot Fuzz; I know where your students are coming from.

I hope I haven't oversold it, Dr M. But I sure enjoyed it, especially the outtakes.

Did you see Shaun of the Dead, Bubs? Because you owe it to yourself to see both.

Now that's a story I want to hear sometime, Danny!

It's not as funny as Shaun of the Dead, true enough, Karen, but I sure wanted to be hanging around the set with those guys.

I haven't even been pimping my interview...I'll have to get back on it just to spite him.

I loved the shit out of Hot Fuzz. Want the DVD. Saw it twice in the theater.

I am still waiting for Hot Fuzz in the previously viewed pile at my local video store. That's just how I do it, but it's on the list for must own.
How many times is too many times for watching Shaun of the Dead? I am pretty sure I could watch it again - it's in the library and I've watched it a million times.
Have you seen FIDO? I have not yet.
I have a bit of a soft spot for zombies ;)

By whatever means necessary, Todd, do watch it now. It'll cure what ails ya.

I know, Beckeye! I haven't been pimping mine either (until now) and when I'm not looking, Mr Big Shot goes and sneaks on the top-rated list.

You really really need the dvd, Phlegmmy - the outtakes are some of the most fun I have ever seen. Did you enjoy Hot Fuzz more the second time you saw it as well?

There is no such thing as too many times watching Shaun of the Dead, Serah. It's the most brilliant thing in the history of brilliant things.
I want to see Fido!

I can't wait to own Hot Fuzz.

I'm afraid to buy it Just A because the minute I do, I never watch a film again. Owning films is the kiss of death with me, it would seem.

Deadspot and his son came up to visit us a few months ago, and brought "Shaun of the Dead" with him-- we loved it. Can't wait to Netflix "Hot Fuzz."

What a great film to bring over, Johnny. Nothing like a good rom-zom-com to bring folks together.

Hot Fuzz was such a fun and funny movie just like Shaun of the Dead was.

Have you heard of 'Spaced' Barbara? It's a tv show that airs on BBC Canada from Simon Peg and the gang. I haven't watched it yet but have taped a few episodes for a dull moment.

They say you only live once and now I've pimped twice so I feel dirty, oh so dirty!

Oh, and thanks for once again presenting me with your magical labia!

You will receive a Labia each and every time you deserve one, Dale.

I've been hearing talk of this wonderful thing called Spaced, but no I have yet to see it. I really must find out if we get BBC Canada, so I can spend a little more time with my boyfriends. Thanks for the heads up.

I enjoyed the second time even MORE. And yes, I planned to buy the dvd for any (hopefully) extra features. Good shit like that can't be seen often enough.

Oh, and btw-- I think Simon Pegg is a hawt piece of ass, frankly. Does that make me strange?

If it does, then I am strange right there with you, Phlegmmy, as Simon Pegg is my secret boyfriend.