The Volunteer Monologues: Friday's debauchery at the Calgary Folk Festival 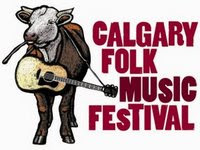 In an effort to pace ourselves and to pamper our no-longer 20-year-old selves somewhat, we made the decision to stay downtown on Friday night. That turned out to be a great decision, although I think we might shift that to the Saturday next year, thus giving us a hiatus between the two longest and toughest days.
We arrived shortly after gates opened; the diehards who had camped out all night had long since snagged the premium tarp locations, but we were more than happy to settle amongst the trees near the back. With two huge screens, you don't miss any of the visuals anyway, and shade was a more important factor to us. 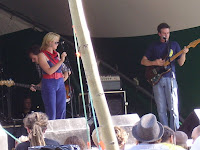 I made my first trip across the river to the hospitality area, where the volunteers and musicians are fed and watered and enjoyed a veggie burger and salads in the company of some volunteers from the food area. And then Eva and I headed off to the Evening Stage to partake of the alternate concert that we had been anticipating for a long time: our first glimpse of John-Rae and the River, Final Fantasy, and the funk/ska collective of Jamaica to Toronto.
John-Rae and the River blew me away. I realize that I am talking about them quite a lot, but they really are all that. I was mesmerized by the powerful voices of both John-Rae Fletcher and Anne Rust-D'eye, and by the uber-tasty combination of soul, gospel, alt-country, and blues. Final Fantasy, although undeniably brilliant and talented, seemed stiff and uncomfortable - his first words being "I'm only going to play six songs because this isn't the real concert, it's just a teaser". Perhaps he is not used to being outside. He did however, warm up to the experience as the weekend progressed, and by Sunday's concert was telling stories about getting his Sims 2 patch and making Mariah Carey jokes. 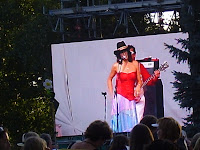 .
We made it back to mainstage in time to catch the jumping jive swing of the Squirrel Nut Zippers, who had the added honour of second best female lead outfit of the evening. Katherine Whalen cut an impressive figure with her red strapless number with the cowboy hat, and then she later upped the ante by ditching the skirt and treating us to the sight of her black undies.
My new best friend, Hawsley Workman, always the consumate showman, did not disappoint. His wonderfully over-the-top performance was spectacular, and in an opinion poll conducted in our household won the best mainstage performance nod. He has a tendancy to meander off into other songs in the middle of a song, famously slipping into Bjork's Hyper-Ballad during his Knox United Church concert last year, and into the Who's Won't Get Fooled Again during Friday night's performance. 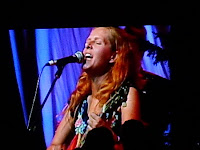 After a short set by Eleni Mandell, Neko Case took the stage. Her performance was perhaps collectively the most anticipated amongst our family, after her cancellation at last year's folk fest and her non-touring with the New Pornographers. She was, of course, fabulous. She is not a particularly chatty performer, although she did please us greatly when she shared her opinion of the Calgary Folk Festival, with a hammy stage-whisper "it's the best one!" She was solid and note-perfect, if a little unsurprising.
The lamplighter parade took place during the final few songs of her performance, with a line of people threading their way throughout the crowd whilst holding aloft imaginatively-designed lighted lanterns. It was quite surreal and very lovely.
I popped into the Volunteers' afterparty on Friday night, as we were staying just two blocks away. Next year I think I will plan to go on either Saturday or Sunday night (or both!) as we are welcome to bring a guest on those nights. As I didn't know anybody, I only stayed until 1:00, although a nice young fellow from the Environmental crew did keep me company, even chivalrously offering to buy me a drink and to escort me onto the dance floor. We chatted and listened to Lubo Alexandrov and Kaba Horo smoke the ballroom with their irrestistable Balkan gypsy jazz.
Then it was back to the hotel for this little festivaller, saying goodnight to the half-dozen or so sex-trade workers I met along the way, to grab a few hours sleep before the first full day, which I will tell you about tomorrow: Rembetika Hipsters, Geoff Berner, Chirgilchin, the Cape May, Bettye LaVette, Bela Fleck and the Flecktones, and even more John-Rae and the River, and Final Fantasy. Plus the Six String Nation guitar. Don't miss it!
Posted by Barbara Bruederlin at 7:25 am

Email ThisBlogThis!Share to TwitterShare to FacebookShare to Pinterest
Labels: not a cougar but I could have passed for one, the Calgary Folk Festival, the volunteer monologues

Are you sure you're not 20 anymore? Wow, that was a super marathon of music!

It was rather marathonish, Just A! Which must be why I am still so tired. But I now have enough memories to last me till next summer.

If it was a real cougar, yes, I would agree, Beckeye. Not so much if it was the lounge lizard variety of cougar.

I am getting tired from just reading these entries, have you fully recovered by now?

It honestly sounds like such a brilliant time, I'm glad everything went swimmingly. You must be shifting through a lot of music right now :)

In case I haven't said it enough, I'm so jealous of seeing both Hawksley Workman and Neko Case. How were Jamaica To Toronto? And glad to hear Squirrel Nut Zippers are still doing their thing.

I was able to sleep in a bit yesterday, Al, so that helped with the recovery, but I was still fallin asleep on the couch by 9:30 last night. I am so lame. The music overload is at the overwhelming stage, where one song melds into the next, driving me bonkers. I must move forward!

Jamaica to Toronto were pretty fine, John. They brought maybe half a dozen of their collective with them and put on a nice ska workshop on Sunday. I had never heard Squirrel Nut Zippers before, but they were so much fun!

If it makes you feel better I feel asleep at 8 :) Then woke up at 10. I don't recommend that, but still managed to nestle back into bed for 12.

If Jetson Stamina wasn't Jetson Stamina he would be Hawksley Workmen because that is a bad ass name. He also writes pop music that doesn't loose it's lustre after 3 minutes which is why he's an impressive artist.

The food chain dynamics alone would make that a band worth watching.

How did you enjoy Eleni Mandell?
I just discovered her music this February.

Damn, it was a great festival! I get to see Neko (with Rufus!) in ten days, and now I'm even more excited!

Holy moly! It all sounds so fabulous, and I can't wait to hear more! Thank goodness it's a long weekend hey :O)

12 hours! Damn, you know how to sleep, Al! Not sure I could pull that off, but I'm willing to give it a try.

I've think you've hit upon the ultimate band, Jetson! Sloth on bass indeed - that's pretty much a perfect image. God I'd bet that badger could shred like nobody's business!

I'm a bad festivaller, Serah, I keep getting Eleni Mandell and Oh Susanna mixed up, possibly because I saw them on the same sidestages with similar groups of musicians. Anyway that's my excuse and I am sticking to it.

That is going to be such a great concert, Beth. Take lots of pictures and notes to report back to us please.

Hey it IS a long weekend! I forgot, thanks Mel. I'm almost ready to go festivalling again now!

I hate tarp runs! So stressful... I never participate in them, except for Friday as I am way to into some of those artists :P
That woman from The Squirrel Nut Zippers did scare me a wee bit. I really think keeping the skirt on would have been a good idea. That and it would have saved hundreds of small children from being scarred for life!

I've never participated in a tarp run either, Becky. I figure I can alwasy go up to the dance area if I really need to get close.

I'm not sure what the scoop was with the skirt. I turned away for a minute and when I looked back, there it was - gone!