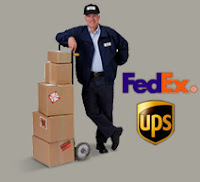 That's when the FedEx guy will arrive. That's when it all ends. Until then I am pretty much living at work.

I'm not certain why granting agencies have such insanely complex application processes, but I suspect it is to save time on actually reviewing the applications. "Aha! This dude used paper clips rather than elastic bands, and did you see this? He didn't include a self-addressed stamped envelope." REJECT. "And what's this I see? Is that, why yes it is, that is 11 point font, not 12. You are so busted, mister!" REJECT.

But most likely the agencies figure that demanding 7 copies of the complete application, plus a common cv with each go to the national agency, along with 12 copies of double-sided and stapled copies of select pages in a separate envelope, while the provincial agency gets 4 copies of the complete application with common cv in each and an abridged version of select pages, and don't even get me started on the Personnel award application, works very well in culling the weak from the herd. If you can't stay organized, I can hear them thinking, you shouldn't call yourself a scientist.

Oh and did I mention that the photocopier isn't working? Before I left on vacation, I thought I would be proactive and make the 25 required copies of a (amazingly already completed) 30 page document which I had to attach. However, with the copier jamming every 5 minutes (and not just in one spot either - these were quadruple jams) and feeding several pages through at a time, so that each document had several pages missing, I only ended up making 10 copies. And now the god damned copier doesn't work at all. I should have kicked it in the arse a few more times.

So today I have to find a place off campus where I can go to get all my copies made. And some of them have to be colour as well.

The other fun part will be tracking down letters of reference which people have promised, but which have yet to materialize. They are just trying to give me a heart attack. And I suspect the departmental secretary is being passive-aggressive when she doesn't return my calls. She seemed far too happy to tell me that the Department Head is away on holiday when I finally reached her and that I should write the critical appraisal letter myself and she would send it to him to sign. Now I have never laid eyes on one of these babies before and nobody can seem to tell me what is expected, so I filled the thing up with hyperbole. I figure when all else fails, baffle them with bullshit.

If I am still alive by 4:30 pm Thursday, I promise to be a better blogger and visit you all again regularly. Until then, I'm off to work.
Posted by Barbara Bruederlin at 5:55 am

Email ThisBlogThis!Share to TwitterShare to FacebookShare to Pinterest
Labels: a purely therapeutic rant, I'm going to boot that photocopier through the window, oh wait, we don't have windows

Don't worry about us, we'll be fine. Go, work, and make that money so you can support us. We're rooting for you.

Oh, Gawd, Barbara! You have my prayers. Crank up some tunes and dance hard around your office every four hours; much more effective than aspirin.

You'd better have a grape Barbara, you need your strength.

I'm sure the process is meant to cull as you say.

Sweet Pete, that is a lot to do. Good luck and we await your return :)

I was gonna say something about grapes. Dammit, Dale.

Anyway, I thought this post was going to be about K-Fed, so now I'm sad.

We will all raise a glass to you on Thursday at 4:30. Til then,give 'er, Barb! Daughters # 2 and # 3 loved their guilty pleasure Justin T.on Sunday night.Guess he put on quite a show!

Here's hoping you make it out in one piece and don't fall prey to a massive staph infection brought on by a dirty paper cut. Or god forbid, the dreaded staple in the eye... be well Barbara, be well.

I've always thought it was an homage to waste.

When that big grant money comes rolling in, Monkey, I will be able to support all of you in the manner to which you would like to become accustomed.

That's a hell of an idea, Beth! I generally have the headphones on at work but it makes it difficult to get up and dance. In fact I have almost garroted myself numerous times, reaching for a file.

I knew I shouldn't have thrown those grapes away, Dale. Oh well, I'll eat cheezies instead. Breakfast of champions!

I'm going to make it, Al! With time to spare, it would appear. Now watch, I will have just jinxed myself, saying that.

I hate it when my dyslexia does stuff like that to me, Beckeye. It's such a disappointment to learn the truth sometimes. I still maintain that a billboard we saw on our travels read "City of Pancakes" when others tell me it's actually "City of Sunshine".

I would imagine he would put on a good show, Berni - he's apparently bringing sexy back. I probably would have gone along with the girls to tell you the truth. Glad they had fun!

I have never personally done the staple in the eye, Karen, but there is a first time for everything. Naturally I am well versed in the art of staph infected paper cuts.

"An homage to waste"! Yes, JustA, it is precisely that. I feel like turning myself in to Greenpeace for the number of trees I have slaughtered in the past week. Murdering for the filthy lucre, I was.

That's how mine feels pretty much all the time, Justrun, but then I am not known for my mental fitness. In fact I am rather good at turning off my brain when I'm not using it. You know, to conserve energy.

Well, Barbara, it all sounds a bit stressful and a tad complicated. Alas, you describe it all with that biting wit that makes it not seem quite so miserable. Sorry I have been away from your blog a bit this past week, but I have returned.

And yet there were bright spots in the craziness, Will, such as when we discovered that my coworker was some kind of photocopying god and that he could get the evil copier to work. That was pretty sweet.

hahaha great link! That's what I should be doing right now, taking my glass of wine and joining Stewpot in the bathtub! And look how shiny and clean he looks in his jammies.