I was crawling through a festival way out west, I was thinking about love and the acid test

One of the things I love most about Fringe plays is that they are fringe plays. It's not that the other

theatre I see is not edgy (check out Sage Theatre's production of Trainspotting if you want edgy), but that Fringe productions are so irreverent. There are no boundaries at the Fringe.

We only managed to take in two fringe productions this week, but considering I barely had time to wipe my own bum, that's actually quite a feat. Plus we managed to do a walkthrough of the Shatner Show at the Uppercase Gallery at Art Central, and buy some Kafka, Dali, Ghandi, and Guevara finger puppets to boot, so I would actually consider the afternoon to be a model of modern time management. 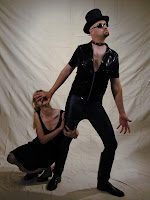 Jihad Me at Hello was a play that I have been wanting to see since hearing a lot of excited buzz about it at last year's Fringe. It's staged by the Obscene but Not Heard theatre troop from Winnipeg (adding another brick to my argument that Winnipeg is the most creative place on the planet - I suspect because you can never go outside there). We saw the production at the Glenbow Musuem on a Wednesday afternoon, and the theatre was close to half full, pretty remarkable really considering the time and the day. We ran into the artistic director of Sage Theatre there, who was sitting one seat over from me actually, and it was nice to touch base with the small circle of the Calgary theatre world again.

The play is a series of sketches woven around the theme of hell, your own personal idea of hell. The fact that the Macarena is playing endlessly as you enter the theatre gives you a small taste of what that means on a personal level (as does the 17 month long Leonard Cohen remix) and that Hitler makes a big comeback through the machinations of an ad agency puts the idea of hell into a broader context.

Jihad Me at Hello is twisted and irreverent and it's in your face and sassy and it's very politically incorrect. Mostly though, it's really bloody funny. I howled through the whole thing, even whilst cringing (as I did during the consumptive clown's pathetic act). If you are more intrigued than disgusted by a discussion of the sexual capabilities of the virgins one would receive after a suicide bombing, or by audience participation in the decision about whether or not a character should get kicked in the box, if you have a yen to see a retarded Elvis impersonator or a damned good Journey air guitar, this is the play for you. Everybody gets skewered.

We then watched The Circus is Coming to Town, which was considerably more sparsely attended, more what one would expect on a Wednesday afternoon. It's a one-woman show about moving to Calgary to get away from your dysfunctional family in Winnipeg (again Winnipeg!) and then having to explain them to your live-in boyfriend after they announce they are coming to visit. It had some great moments too, some memorable characters, whom the playwright swears are not embellished, and it was a little like listening to your girlfriend rant about her crazy family over a bottle or two of Merlot.

The Calgary Fringe Festival runs until Sunday, so you still have a chance to take in a bunch of shows, if you find yourself in the vicinity.

I had completely forgotten that we are going to see Wilco tonight. I'm a little conflicted about it. On the one hand, the last time we saw them, they were spectacular. Plus Elliott Brood opened for them, and those guys are always a good time. But on the other hand, this show is at the Jubilee, which is a fancy sit-down auditorium. An opera type of place. The acoustics are fabulous at the Jubilee, and after the week I have had, it will be rather nice not to stand all night, but I just wonder how hard one can rock in that sort of atmosphere.

Although to be honest, I really didn't care for Wilco's new album, Sky Blue Sky, so I guess I'm rather expecting a show along those lines anyway. But I'm still hoping that please please please they play lots of songs from Yankee Hotel Foxtrot.
Posted by Barbara Bruederlin at 7:19 am

Email ThisBlogThis!Share to TwitterShare to FacebookShare to Pinterest
Labels: Calgary Fringe Festival, I voted yes for the box kick, the Shatner Show

Sounds like a crazy great festival. I miss things like that. Where I live now is a cultural backwater but I used to live in bigger cities that had stuff like that festival, oh well, I'll just live vicariously through you. Thanks for the report.

I think that's one of the reasons I will always need to live in a city, Monkey. And of course I need to live through others as well when it comes to some of those bands that only ever play 2-3 places in all of Canada. Curses!

The theatre sounds so excellent. Good luck on the Wilco!

Ballsy it was, John! Genitalia of all sorts, really. Naturally I loved it.

Do you go fringing, Dale? I would think you would have tonnes to choose from there.
Wilco smoked! Yay!

Jihad Me at Hello sounds even better than I imagined when I first read the title here. The Macarena thing and sex skills of virgins appeals precisely to my perverse sense of humor.

You would have been howling, I'm sure, Phlegmmy. It was completely irreverend and all-inclusive in its attacks.