remember when we were I was complaining about the snow? 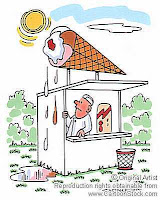 By the Billy bejeezuz, it's been hot. So naturally, the resident offspring is spending the day down at the Stampede grounds in amongst the concrete and the harsh prairie sun glinting off the monstrous metal death contraptions, where they takes your money and you takes your chances. She's staying for the free Sloan concert, so I expect a call around midnight to go fetch her from the train station. I inquired during her check-in phone call, but alas, she had not sampled the deep-fried cheesecake. I was really hoping somebody would.

But this is how smart I was today. I've been finding myself with a little spare time on my hands this last week which would normally be devoted to exercising, so today I did some weather appropriate house cleaning. I cleaned out the fridge. Standing in the blazing kitchen with my head in the deep inside the fridge was actually pretty sweet. I had no idea we had so many bottles of peanut sauce.

Here's the sweltering and it's only going to get hotter Friday Random Playlist:
yeah yeah yeah yeah yeah - the Pogues
sunndal song - Apples in Stereo
looking at you - the Damned
soul suckin' jerk - Beck
I wanted everything - the Ramones
I missed the point - Neko Case
I want it all - Queen
so like candy - Elvis Costello
devil's eyes - Buck 65
head smashed in buffalo jump - Cuff the Duke
I'm going to a pickup party tomorrow afternoon, which probably won't be as titillating as it sounds - it's where we pick up our volunteer t-shirts, festival passes, and badges for the folk festival. I hope my t-shirt fits, since I've done nothing much more strenuous than eat ice cream all week.

And I hope that wherever you spend the weekend, the sun will be pleasant but not glaring, the breezes refreshing but not gale-force, and any rain will be gentle and not turn into hail.

Posted by Barbara Bruederlin at 6:29 pm

Email ThisBlogThis!Share to TwitterShare to FacebookShare to Pinterest
Labels: Friday random playlist, he buzzes like a fridge he's like a detuned radio, Sloan are turning into the granddaddies of Canadian rock

i read that as pick up truck party. :)

oh, and i was supposed to be at sloan tonight! but alas, i couldn't get a cheap flight out and went last weekend instead.

Peanut sauce, oooh, you and GOB should swap recipes... he loves it something fierce. I'm hardly a connoisseur of the stuff but his concoction rocks pretty hard.

I forgot to wish you extreme healing on that foot of yours! At least you're not having to cope with a cast in addition to the heat, huh?

Fried cheesecake? omg I think I'm spontaneously breaking out in zits at the mere thought!

I hope Eva has fun at the concert!

There certainly seems to be a lot of deep fried stuff at this stampede...I'm still leery of the deep fried coke that 668 mentioned.

I remember when we cleaned out our fridge in Kingston, we had countless bottles of sauces, it was crazy. Much like my freezer, the bread graveyard. Its amazing what ends up in the fridge :)

It would not surprise me in the least if they did have pickup truck parties in Calgary, 668.
That must have been a tough choice to make, last weekend over this one. I'll get the scoop on the Sloan show from the kid.

hahaha I cheat and buy bottled sauces these days, Michelle. I actually expected to find more curry jars, but apparently we had already eaten most of those. I am so so so happy to not be wearing a cast. Thanks loads on the happy healing thoughts. I think I got a few of those zits by proxy as well btw.

The deep-fried coke, I am told, Al, is actually batter with coke mixed into it, which I consider a bit of a ripoff. But hey it's carny food.
And have you ever noticed how there are certain sauces that you keep buying even though you already have multiple bottles of same? Seafood sauce for me. Oh yeah, the bread graveyard - how true is that? - my freezer is exactly the same.

What was your Tuesday aft. flick, Barb? We saw Pan's Labyrinth(not on Tuesday aft) and it was so amazing! Hope your foot is healing well.

We saw Pan's Labyrinth a couple of weeks ago, Berni, and it was really good, but it was quite brutal, wasn't it?

On Tuesday we saw Hot Fuzz, which we really enjoyed. It's not as amazingly hilarious as Shaun of the Dead (it's by the same team), but it is still very fun and we had a great time.

Foot is coming along, thanks. I have to start doing foot exercises as I am starting to get a touch of plantar fasciitis. How's your wrist? Damn gardening!

"I" want it all.....I don't think it's too much to ask for the gorgeous sun to be mixed in with regular intervals of one minute snow flurries for cooling off. Geez.

I've been finding all kinds of reasons to hang around Safeway - the coolest place in town (besides Ty's room). I swear they think I'm shoplifting or something...."what's SHE doing here again?...she never buys anything".

Nice way to work song titles into the comment, Deb. Bonus points for you!

When we were still living in a sweatbox apartment in London, and the heat and the humidity were oppressive all through the night, I used to go to the allnight grocery store and wander the aisles, sticking my head into the freezer to say hi to the butterballs. We developed quite a friendship.

Usually cleaning the fridge isn't a very interesting thing to do usually, but doing it on a warm summer day is such a good idea.

I'm thinking I might have to clean it again today, Evelyne, or even better, clean out the basement freezer.

I want it all, too. Except for the insane heat. It's been pretty bad here as well.

Not bad enough to blunt your sharp wit, though, Beckeye, judging from your latest post.

Cleaning out the fridge is a bit like going on an archaeological dig isn't it? lol! Always something suprising in there. Did Eva enjoy the concert? How was the party? Hope you had fun! I'm going to go read some Harry Potter and flake out. Work tomorrow *sigh* Take care xo

All I read was "free Sloan concert" and suddenly was very jealous of your offspring. I wonder if they're coming up for Klondike Days...oops, I mean "Capital Ex" (Stupidest name change ever).

An archeological dig! Ain't that the truth, Mel? Some of those jars needed carbon dating just to ID them.
I guess the sound quality was horrible at the Sloan concert and the crowd was getting pretty rough, so the girls left. Smart kids!
hahha I was only the pickup party for 10 minutes. It was in the parking lot in the blazing sun, where it was about 38C and I did not want a beer or a hotdog. But the tees are cool!

Capital Ex? That reeks! What was wrong with Klondike Days?
I hope that Sloan makes it up there regardless of the name, but fair concerts are usually pretty bad, in terms of sound, sight line, crowd control.