if you fry it, they will come 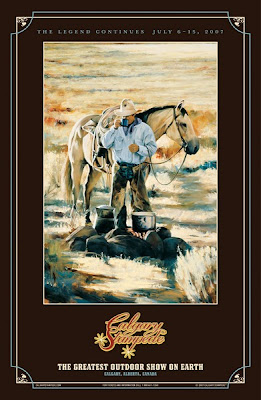 Stampede is apparently not just about mini doughnuts and giant beehives of cotton candy anymore.

Oh the things you can eat, if you have a mind to. Thank god I am not attending.

Don't get me wrong, there are a lot of things that are great about the Calgary Stampede (I'm just not one for soul-crushing crowds shuffling their way across midway grounds consisting of pavement and huge metal death machines, all glistening in the unrelenting sun and 45C heat). But one aspect of the Calgary Stampede that I have always admired greatly has been the sense of comradery and openness and the all-encompassing welcome of events such as the Stampede breakfasts. Any day during the ten days of Stampede you can partake of at least two dozen completely free pancake breakfasts every single day, many of them featuring entertainment or pony rides for the kids, and always damned good food.

Before the company that Jerry works for moved into the downtown core, they used to host a splendid Stampede breakfast every year, which they held in their parking lot. They would hire a professional chuckwagon breakfast company (I kid you not) and set up hay bales in the parking lot and feed anybody who wanted to drop by. They always made sure to invite all the other tenants of their office building, because that was the courteous thing to do, and that's how you behave during Stampede.

And then they moved to the downtown core to share a floor in a highrise office tower with another division of their company. This was ostensibly to foster closer relations between the divisions, but I suspect it's not really working out. Here's an email that the people in Jerry's division received from the other division today:

There are leftovers from Company X's Stampede Breakfast in the kitchen here by reception. Please come and help yourselves to the pancakes, french toast, bacon, sausages, scrambled eggs, hashbrowns, fruit and juice, but please do so quietly as there is a meeting going on in the boardroom.

Boy howdy, isn't that just so welcoming? You are not good enough to come eat with us, but you can help yourself to the leavings. As long as you don't disturb us.

And yet they could have walked across the street and been welcomed at any of a handful of breakfasts that some of the oil companies were hosting.

Posted by Barbara Bruederlin at 11:31 am

Email ThisBlogThis!Share to TwitterShare to FacebookShare to Pinterest
Labels: sharing your office space with douchebags, that's not the Stampede spirit pardner

"Picklesicle" was the absolute last thing I ever needed to see or imagine. If I don't comment for a while, it's because I'm locked in a perma-vomit. Thanks, gal.

iyowvzz - the sound I'll be making in the bathroom soon

my god, did i eat in calgary! and i have visual proof of some of the bizarre food items.

but my fave food item/story is the stampede breakfast.

I'll bet the deep fried coke sounded pretty tempting though, didn't it, Beckeye? mmmmmmmmm!
100,000 suns - that's a lot of hating. That's enough pickle-hating for a few lifetimes, I would suspect. But someday we must hear what caused this trauma. You know, if you can talk about it without barfing.

I hope you got some pictures of the deep-fried cheescake, 668! It sounds horrifying but it has a strange ... allure. I haven't partaken of a stampede breakfast in a couple of years; I really must seek one out.

Must mention that I love your quote of the day! Could it be b/c I happen to have auburn hair? Quite possibly.
Didn't bother w/ the Cloverdale Rodeo this year or really any year truthfully.

The good thing this year, despite the plethora of delicious deepfried treats, is that they're all transfat free. Like that makes a difference.

I did get that right, right? The Stampede went trans-free this year?

Our department has a huge Klondike "Cholesterol Fest". Seriously, that's how it's billed.

word verification - mrbks - the sound I make after eating all that delicious breakfast food and right before I pop an antacid.

How does deep fried coke even fit up your nose? Makes no sense, I tells ya. No sense at all.

Karen gave me a good idea for the menu: deep fried Alkaseltzer.

The Stampede sounds like a blast! I am craving, jonesing for some fried food now. Almost any fried food would do at this point.

You guys were right all along, Danny. Deep-fried Mars bars are unquestionably weird. Gotta love those crazy Scots.

You are obviously of a certain social stature then, Serah, otherwise you would be a plain old ginger.
No stampedes for me either, but I will be acting as the shuttle driver to and from the train for the Stampede attendee in the house.

Right you are, Karen, no trans fats at the Stampede this year. The thing they have to watch, though, is that the high stability canola oil that they are using will break down and develop trans fats if it is allowed to cool and be reheated. Fortunately, I think they pretty much just keep on frying for the whole 10 days.

You should suggest that to the Stampede committee for next year's menu, John. Or come by and set up a booth yourself. The best of both worlds - hangover relief and fried food - you'll make a killing.
But yeah that deep fried coke would be murder on the sinuses.

If it's fried and/or on a stick, it's all good, Bubs. And it gives you all the strength you need for a strenuous day of watching rodeo.

This Stampede sounds much like our state fair. We deep fry everything, snickers bars, coke, you name it, and then we have a nice little catch we put it al on a stick. You haven't lived until you've had deep fried snickers on a stick.

Damn that would be really good for breakfast right now, Just A!

They have a little challenge going on local radio here, send in a food that you would like the resident chef to put on a stick (would that be stickize?) I'm thinking of phoning in, demanding soup on a stick.

re: your label. i am sharing my office with a few douchbags. nickleback lovers and people who don't read. wtf?

God I hate people sometimes, don't you, Al? Especially those whom you are forced to share close quarters with all day, when they are not people with whom you would particularly associate.

- deep-fried coke (isn't that the makings of a bomb?)
- beef shake (gag)
- picklesicle (perverts)
- deep-fried cheesecake (why mess with a good thing?)
- taco in a bag (that can be reused as a barf bag)
- porksicle (what you'll looking like after consuming this stuff?)
- pretzel dog (that's inhumane)
- spudsicle (did they run out of good stuff?)

Wow, that's quite a menu.

Maybe we should throw our own damn stampede with yummy edibles and conspicuously not let them play our reindeer games. yeah, fuckers!

Eva's going to Stampede tomorrow, Deb, and I'm going to try to convince her to sample some of the grosser-sounding things. As of yet, I have never noticed them having prairie oysters on the menu, though (and if I have to tell you what those are, you don't want to try them).

I challenge you to say that three times really fast, Dale.

Yeah! And the best part of that story, PF,was that the one person from Jerry's division who actually took some of the leftovers, got really ill. They had turned off the heaters under the food and just let it sit there.

I secretly want to try it, Mel. Akkk! I'm going to hell for sure.

In a Toronto mall a chocolate store specializes in candy apples going for $9 - $16. They are grotesque in size having huge chunks of sweets slathered in chocolate clinging to the core. Vomit.

I secretly want the cheesecake too Barb.

That just sounds nasty, Leazwell. I've never been a fan of candy apples anyway. and these ones sound like an abomination.

We need to start a self-help group, Deb. "My name is Barb and I want to try the deep-fried cheescake".