How a Friday random playlist become a Saturday one instead, but it was all worth it 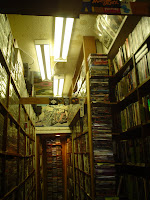 Jerry is away fishing for the weekend, so Eva and I set off on an urban adventure yesterday, in search of the fabled Recordland of Inglewood.
.
We had only been through Inglewood once before and that was because we took the wrong turnoff. We must come back to the magical place, we said. Naturally when we intentionally tried to go there, we couldn't find it, but after a few aborted turnoffs into Ogden and the Sam Livingstone Fish Hatchery, we arrived.
.
Recordland is unbelievable. It is ramshackle warren of little rooms, each quite literally stacked from floor to ceiling with used cds. A few rooms contain vinyl, there's a room of singles, and even a shelf of 8-tracks for the affectionado trying to recreate those magical years of 1972-1975.
. 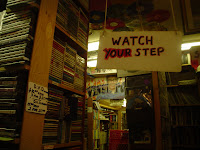 Almost immediately upon entering, Eva spotted The Correct Use of Soap and Real Life, two Magazine cds she's been looking for for a long time, and I noticed the Cramps' Bad Music for Bad People.
.
My major find was a Shoulder cd; Shoulder was the punk band that Bry Webb fronted before joining the Constantines, while still in London, ON. I'm listening to it right now and it it pretty damned decent. I'll play you some stuff later. Eva also found some Sparks, Bjork, Siouxsie and the Banshees, and Primal Scream, and got into a debate with the clerk about Magazine's influence on post-punk (and won). That's my girl!
. 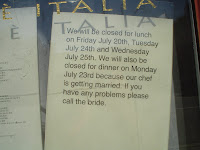 We putskied around Inglewood for a couple of hours, popping into consignment stores, a crazy-assed costume store, and an art supply store where the clerk was wearing a really nice Sonic Youth tee. The first cafe we stopped by was closed for a wedding, so we ended up having an iced coffee in a lovely little house converted into a cafe. It was all cute little vibrantly painted rooms, each with 2 -3 tables, and we chose the lower level backroom which looks out onto the back garden.
.
And then, because we had no urgency to get home for supper, we decided to head to Mission instead and try out the new sushi restaurant we had spotted on our last visit. Naturally we got lost and somehow ended up at the Stampede grounds (a couple of times) but eventually found ourselves in Mission, albeit approaching it from a completely different direction than we had anticipated.
. 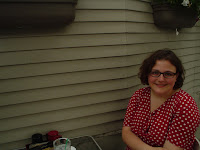 We had salads and a few pieces of sushi on the patio where a little scavenger bird kept us company, but rejected the lettuce I offered, followed that with coffee and lemon squares and nanaimo bars on the patio of our favourite coffee shop, the Purple Perk, and took home some curry pastes, homemade pickled beets, and a big tin of cappucino cream wafers from the organic meat market beside the used book store.
.
Unfortunately we arrived home to discover that nobody had snuck into our yard to mow the lawn whilst we were away, so I had to do that with a achingly-full gut and sore feet, and the cat yelled at us for being away so long, but it was an altogether glorious day.
.
Here then, is the much delayed Friday Saturday random playlist:
the Lovecats - the Cure
Welcome to Paradise - Green Day
Good-bye - Mary Gauthier
No No No - the Yeah Yeah Yeahs
the Body Says No - the New Pornographers
Girlfriend is Better - Talking Heads
Louie Louie - Kingsman
Terrorists and Inhalers - Dubblestandart
Un Poison Violent, C'est Ca L'amour - Jean-Claude Brialy and Serge Gainsbourg
I'm the Man Who Loves You - Wilco
.
Have a glorious weekend, you people of the sun.
Don't give away any Harry Potter spoilers.
Posted by Barbara Bruederlin at 7:41 am

Email ThisBlogThis!Share to TwitterShare to FacebookShare to Pinterest
Labels: adventures in the city, Friday random playlist, going home to cook supper is overrated

What a perfect day! You've inspired me to toss on some jeans and hit my favorite used record store in town. Who knows what treasures I'll find?

Why are you not reading? ;P

That places sounds magical, if you will. There aren't really any good used records round here, I'm sure I'll find some in my next home though.

Love the poka dots on Eva's shirt. Hope you guys are having a boffo Saturday!

Currently of the glorious people of the rain. What a surprise from Vancouver!

For the next cd club swap we are doing revenge of the mediocre bands. I have to go out and find some shit band's concert tee to wear for the night. Sonic Youth, is obviously not in this category!

So... directly behind Recordland and the municipal parking lot, did you happen to see a big old brick house, with the new garage and addition, and black fence? That's going to be ours when I finish renovating it.

Don't you love used cd stores, Beth? Obviously you must, in order to maintain your amazing music collection (or you are independently wealthy), but it's a real thrill when you find something for which you have been searching for years.
Good hunting, my friend!

We are mere muggles, Al! We bought the book at about 2:00 pm today and Eva is blasting her way through it now. So I should start reading it in about 5 or 6 days.
I am amazed at how you have time to blog whilst Pottering!
I'll bet in your next residence, you will be exposed to so much music that we have not heard of here. You are going to love it!

Thats a great idea for a cd swap, Serah! No. Sonic Youth would not qualify, and that is going to be actually quite hard to do, because who buys band shirts for crappy bands? I'd love to hear what you end up with.

We parked on your street, Teddy, but further down behind the Art Supply store, so I didn't actually see your house. That is a lovely street though, and so close to downtown. Best of both worlds, really. But how do you not spend you entire day inside Recordland?

Wow, looks a wonderful store to spend hours in. Magazine: yeah, they were an enormous influence, though the Siouxsie influence may have been the guitarist who joined them. Intelligent pop, which I wish there were more of. Didn't you see that Shelley/Devoto release from a few years back at that store? It's worth a listen...

Sounds great, and I love your list! I just started the Harry Potter and am about 120 pages in. it's a quick read so far.

My daughter would love to get into a musical discussion with you, I'll bet, Danny. She does have the Shelley/Devoto release (I don't think I've listened to it, actually) and she says she wanted to like it more than she does. She's a huge admirer of Howard Devoto.

Eva is reading it right now too, Bubs, and keeps tormenting me with little passages. I guess we should have bought 2 copies!

Sounds like you're an excellent day tripper Barbara. Sorry I couldn't get to the lawn, I had my own to do.

Dale, I'll remember that the next time I'm standing with a snowshovel in my hands, wondering whose driveway to shovel.

well, if your mower ever needs fixin', i'm your gal!

i did managed to go to recordland and actually look this trip. but some child was having a temper tantrum so we had to leave before i shoved it into the shelf of xmas cds.

There is not a court in the land that would have laid a finger on you, 668. That place is claustrophobic enough without the screaming kid action. I admire your restraint.

My son and I were just talking about "Louie, Louie" this weekend. It's one of his favorites.

In Taylor Hall, the dorm I lived in in 1983-84, there was a little plaque commemorating a show in 1962 by The Kingsmen. It's funny, because it ended up being the beginning of a life-long friendship. I'll post about it.

The fish hatchery sounds like an interesting visit too; you wacky Canadians.

Adam's got surprisingly mature musical tastes, Johnny. Reminds me of my own offspring.
I'd love to hear the story of the Kingsmen plaque starting a friendship. I'm going to hold you to that posting.

The only warning with Recordland, Just A, is that it does induce claustrophobia. And it's a terrible place to discover that you've misplaced your reading glasses.
All the schools go on tours to the fish hatchery, because they are wacky like that.

Well, the record store sounds just like heaven. Wonderful way to spend a day. Congratulations on the good finds.

Will, if you ever make it up here, I am so taking you to Recordland. You will be amazed.