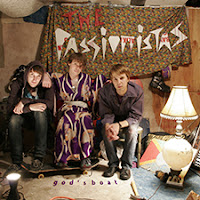 The Passionistas are not a band you have ever heard before. I say that not merely because they are a very young band with a debut album released on a very new label, but more importantly because they have a sound that you have truly never heard before. God’s Boat was released in early June on our friend Will’s label, New and Used Records, and has since been creating quite a stir amongst the bloggers and the media keeping an eye on the San Francisco music scene.

God’s Boat is not an album which will appeal to everyone, but I think that is one of its greatest strengths; this is not music for the masses, nor is it music which will ever find its way onto elevators and across the airwaves at Safeway. The album hits you hard with a rough-around-the-edges mix of garage rock sensibilities and low-fi mumblings, churned in liberally with yelps and squeals and group shouts.

Perhaps one of the more immediately conventional songs on the album is Going Gay, which has a sort of 50’s rockabilly feel to its song structure, but with lyrics and emotions which you would never ever find in a rockabilly tune. One Foot on a Banana Peel has more of a pop sound as well, but here again, a quick listen to the words quickly removes any mistaken assumption that you are listening to a conventional song. The remainder of the 15 songs on the album take themselves off on a variety of tangents, from the very whale-song sounding (and aptly named) American Whale, to the caveman meets military band drumming on the title song, to the disturbing drama that unfolds in No No No, to the nose-thumbing smart-assery of Y2K (why do we have to die cause someone missed a zero), to the 8-year-old girl playground squeals (or perhaps those are seagulls) on So Rock N Roll.

There are some aspects of the Passionistas which do put me in mind of some other bands at times, the yodelling of Born Ruffians, or the brevity and stripped-down sound of Tokyo Police Club, but ultimately the Passionistas have their very own, incredibly unique sound. One might go so far as to call them revolutionary.

To take a listen, head over to the Passionistas' Myspace, or visit New and Used Records to get the full story.

Posted by Barbara Bruederlin at 1:53 pm

Email ThisBlogThis!Share to TwitterShare to FacebookShare to Pinterest
Labels: never to be found at Wal-mart, new music, review, the Passionistas

Well, both tunes on myspace are pretty good. You can hear their influences indirectly, and they look like they will be worth looking out for. Socialists is the best for me.

Wow ... that was such a wonderful review Barbara. I'm up a bit later than usual tossing and turning with label thoughts in my head ... but this just makes my night. I sincerely appreciate all of your continued support ... and hope to someday soon bring the band in your direction.

Great post, Barbara. I'll definitely check out The Passionistas. And I'm thrilled to know Will's label is taking off.

Well it really is one of the most unique cds I have heard in a while, Will. A bit of an ear-opener, that. A Canadian tour would be great, and I still think that the Passionistas would be a perfect fit for Sled Island.

I'm really pleased that N&UR is making waves too, Beth. Will has certainly not been resting on his laurels and he deserves the recognition.

Thanks for the heads-up!

I hope you enjoy, Bubs, and have I mentioned how grand you look in your new hat?

I''ll have to check them out. You're quite the passionista about The Passionistas.

Oh that was quite pleasant. They conjured up memories of the B 52's for me...does that make any sense at all?

And I think you should get Allison over here...I'm pretty sure you could get a handclap or two in there.

Very good review Barb (as is always the case!)

I downloaded God's Boat from eMusic — and I'm lovin' the album! Good going, Will!!!

Hey Deb - that's the second B-52's comparison I've heard actually. I like it!

And thanks for buying it Beth! Greatly appreciated. Look at that Barbara, you're making sales!

I love the name of the band but more so than that, I adore how you filed this under music that won't be found at Wal-Mart, hah. If that's not a rousing endorsement for good music, I don't know what is!

Off to go visit MySpace... ugh. Only the Passionistas page, though.

Well, obviously I have not heard of them but that is an excellent name if I ever heard one!

I think they might be one of those bands that evoke strong emotions (good or bad) in people, Beckeye. Not a fence-sitter in the lot.

I never thought about the B-52's, Deb. You may be onto something there.
Can always count on Al for a good handclap. We have to get that band started sometime.

I love supporters of new music, Beth! Give yourself a well-deserved pat on the back.
I actually found the album quite odd at first, but it's sure grown on me.

You owe me commission, Will!

Be very very careful venturing into the Myspace territory, Michelle. At least it's still safer than Wal-mart.

I'd like to know where they came up with that name, Justrun.
Will? Can you enlighten us?