and yet I can simultaneously walk and chew gum 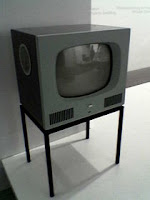 Last night I discovered that I don't know how to turn our tv on.
Jerry had gone to bed, Eva was away at camp, and after I caught up on the three-day backlog of newspapers, I thought I would settle down for a little tube-time. Which I have never tried to do solo before. I settled onto the couch, reclined the back, said, "damn that's a comfy couch" like I always do although there was nobody but the cat around to hear my pronouncement, picked up the remote and pressed power.

Nothing.
I pressed again and the screen flickered and went dark. I squinted at the remote, looking for another button that looked as though it needed pressing, but after trying most of them gave up and thought I would go to the source. So I waddled over to the digital box , put on my reading glasses, and looked for the magic button. I couldn't really see properly, so I tilted the digital box and a cable fell off the back of it. I plugged it back in, pressed power and the screen lit up.
With a big box that read "LOCKED, please enter your pin number". WTF? I didn't know we had a pin number.
I turned the tv on and off a few times, tried changing channels, with no result. So I turned off the tv, put down the remote, and backed slowly out of the room.
Surprisingly, I do know how to program the VCR. And we actually still own one of those, too.
How's your relationship with your tv?
Are you the boss of it, or vice versa (as in my case)?
Do you like to watch tv alone, or do you figure that you need an assistant to fill you in on those Office lines you just missed or an audience to try your Peter Griffin impersonation out on?

Update: Jerry just showed me the trick on the remote, and it involves a series of buttons, so I am not quite as obtuse as I thought. I'm going to test it out later.

Fingers crossed.
Posted by Barbara Bruederlin at 6:43 am

Email ThisBlogThis!Share to TwitterShare to FacebookShare to Pinterest
Labels: I'm just a luddite girl living in a techno world, if my kid wasn't at camp she would be rolling her eyes so hard right now

Ah, this made me laugh, as I have the same relationship with my parents television. I'm fairly certain I broke it on the weekend, they just haven't discovered it yet. The downstairs one has 3 remotes, yes, that's right, THREE. And you have to press a series of buttons to get the tv on. Surprisingly, its easier to put on a dvd. Its honestly too much work, so I've just given up watching it altogether. My own tv has one power button, and I own a VCR/DVD combo thing and have no idea how to program that, so high five to you on that.

I realize I enjoy watching tv with others (especially The Office) and lately I haven't watched tv at all. I was considering it this evening, however I didn't have the strength to figure out the remote situation. I'm sure I didn't miss much though :)

i love this, it's too funny.

i'm a slave to my pvr. i love it. i believe i would worship if i could.

i like watching tv alone or with people. depending on what i'm watching. 24 i prefer to watch alone but comedys are meant for sharing.

Al, I thought I had broken ours too, but apparently not, so I am holding out hope that the rumours of your parents' tv's death have been greatly exaggerated.
Don't even get me started on the other three (seriously) remotes that are required to watch a dvd at our place. I just make the popcorn.
I can't watch tv by myself without doing a few other things at the same time. But give me a buddy and The Office, I'm there.

You could build your pvr a little shrine, 668. A little worship never hurts in ensuring future flawless performance.
Comedies are definitely meant for sharing, it feels weird to be snorting and lolling all by yourself. And you get funny looks from your pet.

I've had the same TV since 1993, so I haven't had to tackle those newfangled ones. I don't know how to work my DVD player, so I haven't hooked it up since I moved in January.

This just made me crack up. I would have done the same thing... given up and walked away. I don't get to watch a lot of TV but I'll tell you this much, if it had to involve a PIN I'd be S.O.L. :)

That must account for your stellar social life then, Beth. If you can't hole up a dvd you are pretty much forced to go out and mingle. I like your thinking on that.

hahaha I first read that as your PIN would be SOL, Justrun, and thought why that's brilliant - easy to remember and slyly subversive at the same time.

I used to enjoy watching TV and movies, but frankly it's become a bit of a chore because of all the remotes and buttons. Every few years we buy a "universal" remote to simplify it, but inevitably those universal remotes turn out to be not that universal, and then we just end up with one more remote to drop on the floor for a terrier to chew up.

The couple we stayed with in Toronto live in a newly built house. The husband is a motor nut and can pull apart and put together all kinds of engines and, in fact, via selling parts has accrued a few million in his life time. However, he knows absolutely nothing about working the appliances or tv etc. in this house. It really was kind of ridiculous to observe his helplessness but of course, I think it is self-imposed. When he gets home he doesn't want to have to think or make decisions.

I don't take shit from dumb boxes. I'll give a chance or two and then it's introduction time to some analog hardware. (hammer)

Well that's quite a revelation. We have a TiVo which took me a little to learn, but know I have it down and it really is my best friend. Though the tv has this unfortunate problem where the sound kicks out and you have to unplug it and plug it back in again. Other than though I think me and the tube get along pretty well, considering all the quality time we spend with one another.

I guess we've been getting off easy then, Bubs. Or so-called universal remotes usually just end up in the bowels of hell known as the back of the couch. I don't even want to think about what they would look like after being wrestled away from a terrier.

Without knowing the man,I'm pretty certain you are right about his motives, Leazwell. Once the property of the so-called helpless bimbo, self-imposed helplessness is a tactic used by a surprising number of people to avoid work, decisions, etc.

HA! Analog hardware! Just A, you are one of those caveman IT guys, aren't you?

You are the tube are in a very loving and committed relationship, from what I understand, Will. And that is such a lovely thing to see.
Me, I've never even seen a TiVO.

Your tv has a PIN LMAO. That's awesome. I don't even have cable right now. I use my tv to watch DVDs. That will be remedied on July 13th. Hmm I never watch the damn thing anyways.

I obviously don't watch the damn thing enough either, Mel, not enough to know how to work it anyway.
The PIN request has apparently never happened before or since. Perhaps I hallucinated.

OH! Maybe you hit the PPV (pay per view) button by accident? You have to have a pin to order movies I think. :O)

Oho! You may very well be onto something there, Mel! You're so smart - that's why they pay you the big bucks (or why they should).