something tells me this is not exactly politically correct 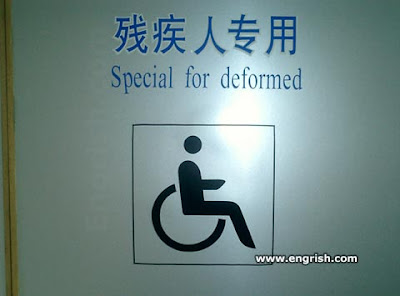 Posted by Barbara Bruederlin at 6:42 pm

Email ThisBlogThis!Share to TwitterShare to FacebookShare to Pinterest
Labels: but what do I know?

ouch, that's a pretty bad translation. Sometimes when they translate packages from English to French it can become quite funny, but this one definitely not politically correct.

I'm still chuckling over your shower cleaning outfit. To simplify things, try Bryan's method of shower scouring- butt(or is it buck) nekkid. Better still, send Jerry to do that.
Is that translation for real?
Your Father's Day sounded lovely, Barb. Three of us took part in the Manitoba Father's Day Marathon, running and/or walking.

It's just so wrong on so many levels, isn't it, Evelyne? Actually the whole concept of Engrish.com is a little iffy on the correctness aspect. But it sure is funny.

I can get lost in the site for hours, Mel. I need to leave a trail of breadcrumbs to find my way out again.

To tell you the truth, Berni, I generally use Bryan's nekid butt method whilst shower cleaning, but there was no way I was risking letting my bum touch those nasty walls.
Your Father's Day sounds great! It's not everybody who can do a marathon after going to a social the night before. You guys are totally hardcore.

Oh yeah, I remember that one now, Bubs. I love chinese-english translations. My coworker is Chinese and he comes out with some of the most amazing things sometimes. It's pretty much the only thing that keeps me working there.

At least they tried to make the handicapped feel special before insulting them.

I find Engrish hit or miss. Good for procrastination though, oh yes.

And yet I laughed out loud. Love those translators ...

I have the feeling they meant "special", Beckeye, as in "my mommy says I'm special".

Just what I need, Al, more procrastination sites. You know what, I procrastinate well enough on my own without the internetz. Throw that into the mix and nothing ever happens around here.

I'll share one of my favourites phrases from my coworker with you, Beth:
"sarstam program" - which apparently means "programmable thermostat". Oh it took me a while and some probing to figure that one out.

It made me cringe mightily, Danny. And then I snickered.

John Mutford said...
This comment has been removed by the author.
5:46 am

Have you ever used Altavista's Babelfish? It's quite amusing to put a piece in, translate it to another language and then translate it back to see what was lost...

This is the first verse of Karma Police put into Portuguese from English and back,

Some are much funnier than this. My mom's dinner theatre used to have a page that when translated into Italian (I think) and back told us that they served "feet" for dessert.

hehehe that's great, John! I have used Bablefish to check German phrases sometimes and I know that it will spit out things that are ludicrous sometimes.
Karma Police is a great choice for those transliteration blues! And look what it did to one of my favourite lines "he buzzes like a fridge" - "that a coolant buzzes as".
I'll bet your mom's dinner theatre serves delicious feet.

You've pretty much summed it up right there, Justrun!

I think it's correct. That person doesn't have a neck.

Oh sure, you can laugh now, Will, just wait until the karma police come after you!

Good observation, Just A. That's likely how he ended up in that chair in the first place.

I know...sorry, the dryness of my comment must not have translated! ;)

know when to quit

No, don't apologize, Beckeye. It's not you, it's me. Obviously I need to work on my dry to english translation.

You're not supposed to admit that, Winter!

hahahaha! That's hilarious, Anony I know who you really are! That's ust 7 minutes of goodness, innit? Why do you aggress me?

When I was in China five years ago, I saw a number of "Engrish"-worthy signs, especially on public washrooms.

An old friend of mine lived in Mexico for a few months some years back, in order to study Spanish. She lived with a very nice family, that had five teenaged boys. She usually came home every day and had lunch with the family, speaking only Spanish with them for practice.

In Spanish, there are two words for "take"-- tomar and cojer. She had replied Yo coji el autobus. In Mexican slang, the cojer form of "to take" also means to, um, have carnal relations with.

Needless to say, the five boys sprayed their lunches across the table laughing.

hahaha that's great, Johnny! I'll bet that family still talks about the time their boarder had sex with the bus.

Of course he's deformed, look at that bulbous ass!

Oh lord, your're right, Dale! And it's transparent too!