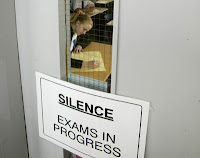 That's what the resident offspring's junior high math teacher used to tell them at the start of an exam. Some bright light would inevitably have to ask "what does the F stand for?"

The RO finished her science exam today, with only social left to write on Thursday. Pffft, social! She invented social! If you were to look in a picture dictionary for the definition of IB Social, you would see a picture of the resident offspring, true story. Don't ever get her started on the Russian revolution, is all I'm saying.
Sometimes I miss being in school. Even exams.

Except for that terrible year when my friend was killed a month before her wedding and two days before our Physiology final. I would only do that one over again if I could change things so that she never stepped out into that crosswalk.

And maybe not the time I wrote my Zoology final with a broken finger. Although I am pretty sure that's the only reason I passed the course. I think the prof figured I must have known way more than I did but was in too much pain to write more. And I wasn't about to deprive him of that illusion.

Although my buddy Darryll is probably ultimately responsible for me passing that course, as he was the one who started singing My Shalonia once while we were studying, to help him remember that the green sea turtle was Shalonia Midas. And wouldn't you know that green sea turtle was on the exam?

Email ThisBlogThis!Share to TwitterShare to FacebookShare to Pinterest
Labels: I've got the Knack for writing Zoology exams

I hear you on the social studies. I'm married to a history teacher. As for school all I remember is it was much easier than the real world.

And now for some reason I'm hungry forTurkish Cuisine

I kind of miss school too, but I have an awful recurring dream where it's finals week and I realize that there is one class that I haven't been to all semester, and obviously I'm going to fail. It's HORRIBLE. I actually wake up completely stressed out, but after a few minutes of groggy depression, I suddenly realize that I already graduated and I'm actually still stuck in my adult nightmare. Whew.

I'm such an IDIOT! Just A, I didn't know what the hell you were talking about Turkish cuisine for until I took a look back at my post and realized I had written turkey instead of turtle. Not once, but twice.
So I changed it so that everybody will think that you are the insane one. It's only fair.
But yeah, the real world is way overrated. As is proof-reading, obviously.

Beckeye, maybe some night, instead of waking up to your waking life nightmare, you'll go write that exam, and miraculously ACE it, only to discover that you are buck naked in class.

That is grand advice.

I miss being in class and writing papers, I don't miss exams because I hate standerized tests, me brain just does not work well that way, at all.

Give me a question and I can write you a paper on it, but put it in multiple choice form, well, there is no hope in heck of me passing.

Good luck to Eva on the rest of her exams!!

It is simple, yet elegant, Al. Not bad, coming from a math teacher.

I'm actually not bad at multiple guess, but much prefer essay questions too. The ones that I can't handle are the ones where you have to find the derivative or where you have to memorize the Krebs cycle. So I guess that would anything calculus or biochem.

Ah, to only have school exams to think about. How sweet it was!
(Of course, we had seven thousand other "real" problems too like which boy you last kissed and where to buy the perfect blue eyeshadow. But still.)

And who to sit with at lunch. That was always major trauma, Justrun. Now we don't even stop working to eat our lunch. Hey I want to go back to school.

After sitting in a meeting at Lindsay's school today, I can say I miss the whole "buzz in the air" this time of year. So exciting.

That was quickly killed when one of the teachers was grabbing tongs and gloves to go retrieve a raw, maggot covered steak out of a locker.

Your My Shalonia story reminds me of the Nutrition course I took in nursing school (yes, nursing school). Remember Sweet's "Love is like Oxygen"? We used it to remember the over/under dose effects of the vitamins and minerals. "Love is like Magnesium- You get too much and you get scaly dermititis." Oh hell, no wonder I dropped out.

EEEEWWWWWWW!!!!!!
I've been there for the cartoon of milk left in the locker over Christmas holidays, Deb, but I'm sure that doesn't touch the maggot-infested steak. It was
intentional, I'm assuming?

John Mutford, you are a man of many surprises! But obviously something stuck with you, as I'm sure you are very careful forever and always not to overdose on magnesium.

Social Studies is da bomb! Good luck to Eva on her final! She will ace it for sure! :O)

I just read Deb's comment about maggoty steak EEEW :O( I bet that was lovely.

I love the idea of mnemonics, Mel, but am actually pretty lame at them.

Great trick with that maggoty steak - I'll need to remember that one for future reference.