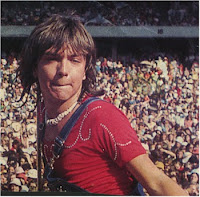 Suddenly all the boys are wearing puka shell necklaces again. A week ago, no necklaces, this week, every third teenage boy is wearing shells around his neck. What's going on? The boys wore these when I was in high school. Are they now passing them onto their sons? Are these a summer-time rite of passage into manhood?
+
My cat is smarter than I am. She hopped up on the computer desk this morning and sat looking at the screen, and I noticed her eyes following the cursor, so I started playing with it, running it up and down and across the screen, and got a chuckle out of her reaction. Then she started looking from the cursor to my hand directing the mouse and back to the cursor again. Finally I could see a light bulb go off in that little kitty head as she ignored the cursor entirely and watched my hand instead.
++

Death of a President is a riveting film. I had not expected to be as transfixed by this fictional documentary as I was. It deals with the 2007 assassination of George W Bush at a Chicago hotel, and through the seamless blending of real footage and filmed segments, largely of talking heads, reveals the racial profiling, the erosion of civil liberties, and the increased civil disobedience preceding, surrounding and following the event. The scenarios of rampant xenophobia, in particular the implementation of Patriot Act III, are frighteningly believable, and I think Eva summed it up best when she said that the only reason there have been no serious assassination threats on Bush thus far is because that would automatically make Cheney president.
+++
The perfume abuser at work no longer stinks. It's true! I ran into her several times in the past couple of weeks, and not a whiff out of her. I believe she must have learned a lesson from the news story of the passenger who was kicked off the bus for perfume abuse. Either that, or she reads this blog.
++++
I have become a lazy arse about awarding the Labia Awards. Shamefully, I didn't even award one last week. And I have to

admit that with the arrival of summer, the Labias will be a trifle hit and miss. That said, I must give an Award this week to:
.
Dale
for his eloquent label
"Barbara Bruederlin"
Oh come now, surely you didn't believe that I was above the odd bribe?
+++++
Some music sounds so perfect in the summer.

Home as a Romanticized Concept Where Everyone Loves You Always and Forever by Wood Pigeon sounds so divine on a lazy summer day, where nobody is moving too fast and the most effort you want to make is to lift that icy drink to your lips.

So Sleep by Junior Boys is perfect for those sultry summer nights, when it's too hot to go to bed, so you keep dancing..

May these help you make it through the work week.

Posted by Barbara Bruederlin at 6:50 pm

Oh, I LOVE those shell necklaces! I remember my stepdad's sister's boyfriend used to wear them when I was about 11ish or so. I thought he was so cool. So where her (the step aunt) rainbow toe socks lol! I'm very happy to hear the necklaces are back in :O)

I am definitly adding "Death of a President" to my Netflix queue.

Well they seem to be back in my corner of the world anyway, Mel. I'm not sure about anywhere else. You'll have to let me know if you spot any.
Toe socks look so uncomfortable! Although they are pretty cool.

I hope I haven't over hyped it, Mal Snay, but I was pretty transfixed with it.

hahaha, Serah! I know, right? That's how long those necklaces have been making the scene.

Not really a fan of the shell necklace myself.

I'm going to have to watch "Death of a President" it sounds very interesting!!

Just this weekend, Kim was expressing her gratitude that I have not picked up on that trend. I remember that the last time I saw this was in the late seventies.

I have no idea what's up with the puka shells... one summer they're out the next, back in. I have a puka anklet I've worn since high school, but then again, I'm a nerd.

Did you know that David Cassidy was my boyfriend when I was 9?....true - it had to be. We had the same initials so that sealed the deal. Marriage even.

I think the shells are a summer thing...you know, beach bums and all that.

That's one movie I thought might be interesting...will check it out now for sure.

I remember hearing about the movie then it completely slipped my mind. Definitely have to check that out.

Have you seen Volver btw? Not related, but I watched it last night and it was pretty good.

I never understood the shell necklace thing, Al. I probably could if we lived in Hawaii or something, but sadly we don't.
Death of a President is way more interesting than a fictional documentary should be.

Kim has a lot to be grateful for, Johnny. It's bad enough that boys are wearing them now, but I think that anyone who was around for the first incarnation of the puka should definitely steer clear of them.

If you've been wearing it all along, you have earned the right to wear it proudly, Justrun. I'll bet it kinda pisses you off that they are coming back in style. People are such copycats.

Well if you and David Cassidy shared initials, then it was a match made in heaven, Deb. Whatever happened? It sounded like such a solid plan.
I guess you're right about the summer thing. Hey, I should dig out my toe ring!

It's worth watching, John! Is Volver that Penelope Cruise film? That's pretty much all I know about it, actually.

Death Of A President has been on my "to watch" list for far to long. Perhaps I should head down to the local video store in time for the weekend...

I haven't noticed the necklaces... I've been to distracted by all the "man capris" at my school. Although, I knew a kid last year who wore one ALL the time. Maybe he moved to Calgary and started the fad.

I don't mind the shells on the kids but anyone over 25 shouldn't be wearing them around me.

Your game of cat and mouse was intriguing! If a cat can learn that easily, maybe your perfume polluter can too!

I remember all the hoo-haa at the film festival here this year over Death of a President, I'm interested in seeing it.

From here on in, every post will be labelled Barbara Bruederlin. It just makes sense.

You'd better keep an eye on that kitty - clearly it is hatching a plot.

Damn it, it was that damned kid from Edmonton who started all the nonsense! Thanks for the heads up, Becky.
Patrick Wolf is wearing red man capris on the cover of his new cd. It's pretty lolz.

You catch on pretty quickly, Dale, about which side of the bread is buttered.
My fear with the perfume abuser is that she just ran out and is awaiting her next gallon shipment from Kazakhstan.
I'm thinking of appointing my cat as ID checker on puka wearers. Anyone over 25 gets them scratched right off their throats.

She's pretty much always hatching a plot, Phlegmmy. Lately it's been how to stay out until 3:00am and still get me to get up to let her in the house.