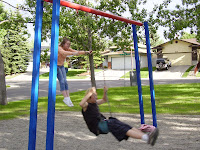 Not really, that's only Bloc Party singing about hunting for witches. But hey, we are having a Block Party this Saturday.
For the past three years, we've closed our street down for a few hours on a Saturday at the end of June, collected five bucks per family and had a barbecue, with the north side of the street bringing salads and the south side bringing desserts. It's pretty fun, I get to see people I haven't talked to since hitting them up for Kidney Foundation donations in March, and aside from baking something fattening to offer, I don't need to cook supper.
I don't really know my neighbours as well as I should. Back in London, we were really tight with our neighbours; we were all around the same age, started having kids at the same time, and we lived in houses with big front porches from where you could see everyone coming and going. It's different here. We arrived in December and didn't really meet anyone until spring. And the houses all had rinky-dink little front stoops. We were one of the first families on the street to add a big front porch, and since then a lot more people have done so, so there is more interaction.
But by now, we are part of the invisible generation on our street. There are the

old-timers who have been here since they wrastled this community out of the bald-assed prairie, there are the young families who amongst them have a total of about 75 pre-school kids who all play together, and there are us. I'm not complaining; I love seeing all those kids and moms gathered together in one of the front yards when I get home from work, and love to hear the dads calling to each other as they arrive home; it's the sense of community that I left behind me in London, Ontario. But I am only on the periphery.
Still though, it will be nice come Saturday to yack with the others and to solidify the community spirit a bit more.

But I haven't told you about the best part of the annual block party! It's the Garbage Exchange!

A few hours before the start of the barbeque, we all put stuff we don't want anymore on our front lawns, and people wander up and down the street and help themselves to whatever catches their fancy. Gratis. And whatever is left over, gets picked up by a charity.

It's great, and this year I vow that I am actually going to open those boxes that we never did unpack after our move here nine years ago. I have a feeling we don't need whatever is in them.

Posted by Barbara Bruederlin at 6:10 pm

Email ThisBlogThis!Share to TwitterShare to FacebookShare to Pinterest
Labels: I heart garbage exchange, one more way to get out of cooking

That sounds like fun. I miss living in Anytown, USA. I wouldn't want to exchange garbage (or anything else) with the people in my Brooklyn neighborhood.

That sounds excellent! Its amazing how much we don't really know our neighbours eh?

What a great idea! A lot of neighbourhoods up here have block parties as well - unfortunately because I live in an apartment, I don't get to enjoy them. Alas, I'm a block party virgin.

Please take some pictures to show us all the really cool junk out there.

Oh give em a chance, Beckeye. I'll bet some of your Brooklyn neighbours have some lovely items that will really enhance your life.

You'd think after 9 years here I would know some of them a little better, Al, but I'm sure I'll end up on the news one day, telling everyone how he was such a quiet polite man...

Good idea, Karen. I shall take some snaps. I'm sure there will be some pretty incredible stuff gracing the front lawns.
A block party virgin? What kind of block parties do you Edmontonians have anyway?

sounds like a win-win situation. Get rid of junk and eat.

I'm the same around here...my kids are grown up and it's all little ankle biters in the hood. But I'm a sucker for kids and they all love me because I butter them up with bribery offerings. They're my little army and they keep the squirrels at bay for me. And they hose me down when it's hot.

Have a super time at the block party. Mmmm, what fattening thing are you creating?

I made a double batch of Wendy's Holly Dollies, Deb, which will also serve as dessert tonight, as we are having company. Gotta multitask where you can.

In my on-going basement clean-up, I got very hard-nosed-- I had the realization, about some things down there, that not only had I not used them since I moved into my current home nearly nine years ago, I had moved some of them two or three times before that without ever using them. I finally got rid of a lot of stuff.

I am going to have to introduce the garbage exchange idea to our block party.

My neighborhood has changed a lot over the last year and a half and finally everyone is getting to know everyone else.

That sounds great! I love block parties. One thing I'm sorry about is that we live on a busy street, we have very little interaction with the folks opposite us, and we can't have a cool block party like you.

I'd have problems with the garbage exchange. Well, really, MizBubs would. We'd inevitably end up with more than we put out.

Yeah, seems like knowing your neighbors is really uncommon these days. I don't really know any of mine, though it probably helps if there in a similar age range.

Too bad I'm not going to be in your neighborhood during my trip.

If left to my own devices, I would get rid of 90% of our crap, Johnny, but that's hard to do when you live with pack rats. Your tale has inspired me, however. I shall stand firm, everything must go!

Was it the massive bonfire that cemented the neighbourhood bonding, Just A, the one where you showed the non-believers how to burn things up real good?

That's an inherent danger of garbage exchange, Bubs. We need to implement a system, perhaps a weight-scale or something, so that we keep the input-output load in balance.

Age does seem to make a difference, Will, or at least similar lifestyles. Especially if you all have kids around the same age, you inevitably have a lot in common.

That is a shame, Leazwell. You would certainly be welcome to join us. Have a good trip, even without a block party/garbage exchange!

A garbage exchange sounds like a brilliant plan, you potentially get great stuff AND get to judge! Yay!

And I shall be brutal in my judgement of other people's stuff, trust me, Dale!

What's a better way to get to know your neighbours than rooting through their trash? You might take one look at decide to skip on the barbecue afterall.

If you do go, take your camera and as you snap photo after photo of grins and beer bottles, keep saying how great they'll all look on your blog tonight. See if you'll be invited back.

Good plan, John. That's a great way to alienate myself further from my neighbours.

Sounds like fun. Yeah it's always a good idea to get to know your neighbors.Just a matter of getting out there and saying hello. Now I'm seeing you sitting on top of the house with a shotgun though. lol

Argh, it got rained out, Ocean, and then they went ahead with it later, but by then we had already made alternate plans. Did put all our garbage out today though. And I stayed off the roof.

Because of you, I miss my hometown, Edmonton. I used to play in the prairie with my uncle. There, we had flown kites and had built still war planes. We loved the skies, the air, and most importantly, the friendship and the community. Then we transferred to main Calgary. Roofing Company was what first approached my eyes, then the numbers of oil depots, and then the taller buildings I had never seen in my old place. Amazement, I felt after a long stay. I've seen great simple things here in Calgary. Roofers with a daily routine, cleaners with happy smiles, and workers doing regular job were things that fascinated me. Just that We should appreciate things everyday.