the case of the chirping power cord - le fin

I thought it was a step in the right direction when Blogger implemented a draft autosave about a month ago. I thought so all the way up until today. Today, after spending a goodly amount of time writing my post, which I was going to tell you was the most insightful piece of literature you would have ever read except that wouldn't be true, it was actually pretty lame, but anyway, weird things started to happen when I tried to publish five minutes before I had to leave the house, and Blogger tried to tell me I wasn't logged in and my account didn't exist. No problem I thought, thank God for the autosave. Except it only saved the title and first sentence.

So you are going to get the 30-second bunnies' version of my original post. 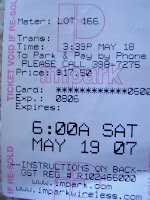 I am now the happy owner of a brand-spanking new fully functional and chirpless, laptop power cord. And the best part is, I reused the $17.50 parking pass which I had previously only used for 10 minutes. I figured that if Impark was able to ticket and tow my car in the 8 minutes that I was parked in their lot this time, I would gladly fork over the money.

But I've said it before and I'll say it again, it's exhausting being a lady who lunches. I have a whole new respect for those poor creatures trying to survive the mean streets of Hyanisport.

Eva was dismissed before noon on her birthday and we drove to Mission, had lunch at the Purple Perk (Thai beef wrap, yum), bought used book at Books on 4th, whipped over to 17 Ave and scored cds at Megatunes, walked past and did not enter the new cupcake shop, Craves, bought art supplies at Mona Lisa, had gelato (my grapefruit one even came with an authentic grapefruit seed), darted over to 11th Ave and picked up aforementioned replacement power cord whilst sticking it to the man for parking fees, and gorged on take out curry and DQ Chococherry Love Blizzard ice cream cake that night.

The Friday Random Playlist reflects the weather today, what with the mention of beaches and waterfalls and roses and sleeping on roofs and tents. 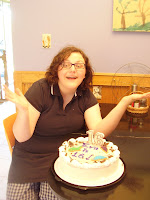 As is usual around here, we have skipped spring altogether and gone straight into midsummer. It's going to be flirting around the 30 degree mark all weekend, clear and bright, and I plan to reclaim the lounge chair that has been commandeered by the cat and maybe finish off that leftover ice cream cake. And I've already bought the limes for the spritzers.

May your weekend be as fabulous as you are and may your only concern be deciding between beer and wine and who's going to barbeque that shrimp anyway.
Posted by Barbara Bruederlin at 9:49 am

Wine and Waterfalls for my lot - trip to the lake with The Stone Roses blasting away - it'll be like 1990 all over again!

That sounds like one whirwhind of a 16th birthday! Early dismissal as well. Not bad I say. I'm not sure I could have bypassed the cupcake shop though. Craves, what a great name.

A day of books, CD's and art supplies. Heaven.

Right then, Danny. I shall pour you all a big mug of wine, turn up the Stone Roses, and you can enjoy the nostalgia.

I would never have thought I could bypass the cupcake shop, Toccata, but we had been nonstop eating for hours by that point and were a wee bit overfull.
All in all, it was a pretty heavenly afternoon.

Mmm DQ cake and all the other good stuff too! Sounds like a great weekend.

The Flaming Lips (and later, The Shins) were on Austin City Limits the other night so I caught part of the show, wild, wooly and pretty fun.

Oh, and I saw your Peter, Bjorn and John (is that right?) on Leno or somewhere the other night too, very entertaining.

Elvis Costello was quite busy today, wasn't he? He also showed up on Bubs and my lists today as well.

I'm still stunned that a bunch of us (you, me, Bubs, Tenacious S and others) have teenaged children. How did this happen? We're way too young for that.

You guys did it up right...sounds like a perfect birthday. Love the picture...so cute!

The Flaming Lips were on Austin City Limits, Dale? Wow, that's pretty surreal! That's like comparing apples and crocodiles. I would love to see a Flaming Lips show sometime, maybe crowd surf in one of those giant bubbles.
Aww, PB&J on Leno! I'll bet they were adorable and hilarious.

If you get drunker than Ginsberg, you are in big trouble, Missy!

Elvis' ears must have been burning yesterday, Johnny.
If the next 16 years pass as quickly as these ones did, we'll be dead by next week. No wonder people seek immortality - there's not enough time to get everything done in one lifetime. I guess this is an indicator that I really should grow up soon.

It was so much fun, Deb. I can't believe the good luck of the 11:32 dismissal (why do schools have such weird timetables?), it gave us lots of time to poke around downtown.

What a great list! Peaches doesn't turn up too often for me, and my eldest has a bunch of her stuff on the puter. She has kind of a potty mouth, though. Ever see her video with Iggy Pop?

You have a great weekend!

Do you think it's a coincidence that they named a cupcake store "Craves," a word that's awfully close to that fitness joint "Curves?" Maybe you don't have Curves in Canada, but I wouldn't doubt if Craves started popping up right next door to anywhere there's a Curves. It's a conspiracy, I tell ya!

Oh wow, that sounds like a most excellent way to spend the afternoon, even though exhausting, quite fun :) Glad you both enjoyed the day.

Its been pretty hot here this weekend as well, but thunderstorms are threatening us, so maybe we'll get a break soon!

I've been concerned about that new autosave. Then again I don't trust technology.

It's been all thunderstorms and muggy days around these parts.

Now I am craving some Stone Roses.

We've been trying our damnedest and are only halfway through that cake, Bubs. You should bring your crew over for a slice.
I haven't seen that Peaches/Iggy Pop video; I'll have to look for it, although I'm sorta scared of what I might find. I think her potty mouth is pretty hilarious, in small doses.

I'll bet you wish that pool was open now, Al! Glad to see you survived convocation, although it must have been hotter than hades in those gowns.
We did have a blast that afternoon. Got the new Patrick Wolf too!

It never gets muggy around here, Just A. Sometimes I think that I miss the humidity of southern Ontario, until I remember what it's like trying to breath in a +45C humidex (sort of like trying to breathe pudding).
If you don't trust technology, then there is no hope for me.

Oh, you'll have to share how it is. I'm curious.

Mmm I choose beer. Now I just have to chose between Moosehead and Alexander Keiths heehee! I totally would have gone into the cupcake shop. I've been out of control lately though. I love that photo of Eva, it's great!I'm glad you had such a great day!

Will do, Al. It's actually quite good - reminds me of He Poos Clouds at times, but P Wolf actually has a very nice singing voice, I was surprised to find.

I've been choosing beer more than usual in this hot weather too, Mel. I generally go for Grasshopper, which is a nice light wheat beer made by Big Rock. Our neighbour is a Big Rock sales rep. Who has more fun than a beer rep?

(I still cannot believe there is a "chirping" power cord. Never heard of such a thing.)

I really should have arranged to put it in a museum, Justrun. It was the oddest thing.

We do have Curves gyms here Beckeye and usually they're in plazas featuring doughnut shops or KFCs.

I've only ever noticed them beside Subway sandwich shops before, Dale, but perhaps they are branching out in central Canada, ever since that Jerod dude ruined Subway.

And you just made me realize that I snubbed Beckeye entirely! I'm grovelling for forgiveness, Beckeye. Make that $50 a $100.

So, first off, sorry for the auto save drama. I worry about the lifechanging post that I missed ... THANKS AUTOSAVE! Anyway though, I'm glad you have a chirp-free power chord, and happy birthday Eva!

I don't trust autosave, Will. I think it's just a scam.

But I do love having a trustworthy non-chirping power cord.