Canadian cat tales: how one cat maintained sovereignty against the American invasion 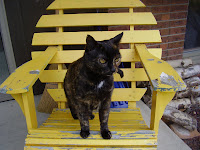 One of the first times we ever let Sputnik, then a wee kitten, out of the house, she farted around the backyard for a bit and then promptly galloped up a tree, and onto our neighbour's roof, where she paraded around the chimney stack. Naturally we panicked, thinking she was never going to be able to get down in one piece. So we hauled the biggest ladder out of the garage, leaned it up against the fence to the neighbour's house, and then watched as she casually hopped off the roof, onto the tree branch, and scampered safely to the ground.

That was nine years ago. She is considerably more sedate and less daring now, but 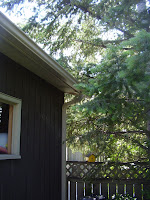 even so, last summer she somehow found herself on our garage roof, and we could tell that she was second-guessing the wisdom of that move. She kept coming to the edge of the roof and meowing rather pointedly at us. We kept trying to reach her to grab her, but she would have none of that, and then, just as we were heading to the garage to find the now-firmly buried ladder, she wobbled her way along the spruce tree branch that touches the roof, shot headfirst down the trunk and made a beeline for the house, where she bolted in the back door, eyes the size of dinner plates. I have never seen her move so fast (and she's got lightning fast reflexes). Her little womanly belly was no longer swaying from side to side, rather it was snapping back and forth. Musta hurt. We thought we had seen the last of those adventures.
However on Friday last, we had a visitor over for dinner - an American visitor. Sputnik was being her usual amiable self, noodling around the perimeter as we sat outside at the patio table, showing off by chasing her tail, and coming in for the occasional finger rub. But she must have heard us discussing the relative differences between Canada and the US, and heard our guest talking about her (American) cat who looks very much like our Sputty.
Obviously Sputty had a few points to make about her superiority to any American imitator, because the next

thing we knew, there she was looking down at us from the garage roof. Only this time, she was being as cool as a mountain stream, as she surveyed her domain and took stock of her subjects (us, and the dog barking down the lane). And she didn't seem at all concerned about how she was going to come down, so we didn't get worked up about it either - continued our drinks and our conversation. I guess eventually the novelty of the rooftop started to wear thin on Sputnik, or she realized she was losing attention and admiration, because the next thing we knew, this nine-year-old cat, still bearing her winter paunch, launched herself in perfect Rocky the Flying Squirrel formation onto the trunk of the tree, a good two and a half feet from the garage roof.

And she nailed that landing perfectly too.

And then being far too cool to admit to any fear or trepidation, she coolly descended the tree and strutted her bad ass around the back yard for a while before going for that much needed drink of water. You could almost hear her little kitty thoughts: "oh yeah, that's how we get off the roof in Canada, yo! I'd like to see that American cat try that."

Show off.
Posted by Barbara Bruederlin at 1:40 pm

Email ThisBlogThis!Share to TwitterShare to FacebookShare to Pinterest
Labels: cool Canadian cats think they're all that

lol It reminds me of a cat we had when I was younger. She would go on the roof of the living room and we would try to catch her (we were a bit too lazy to try to find the ladder) but the little cat just wanted to play with us.

"launched herself in perfect Rocky the Flying Squirrel formation" - loved it!

I'm trying so hard to picture this, where is the video camera when you need one! In my mind her paws are even doing a superman fist ;)

My dog is funny around other dogs, on her best behaviour and never does any wrong, whereas the other dogs we typically have over, are rowdy, so she does the opposite, even though you know she wants to bark too. But such a lady, she restrains.

That's funny..and you were caught without a camera again. I've never liked cats, but maybe it's because I've only met American cats. Obviously Canadian cats are a whole different breed. They know how to party.

hahahaha! Go Sputty! All Loki does is launch himself on to visitor's shoulders unexpectedly. while startling and sometimes funny, that's nothing compared to Sputnik's daring feat :O)

It's odd what cats think is entertaining, isn't it, Evelyne? Luckily you were too smart to get tricked into fetching the ladder.

It was the cape steaming out behind her that was the dead giveaway, Al. Your dog sure sounds like she's got her head screwed on right - knows how to present herself in the best possible light against the competition.

I am always without my camera, dammnit! Although it hardly makes any difference, Beckeye, as I am the world's worst photographer.
Canadian cats are weird - at least this one is.

From the floor, Mel? Loki must have springs for legs! Is he part Tigger?
I don't think Sputnik is in any hurry to repeat that stunt. She made her point.

I imagine there was some head bobbing in that strut, too.

as a cat lover, I totally appreciated/loved this post. I could picture it all, right down to her "womanly belly". You have such a way with words Barb - if you ever wrote a book I'd be first in line to buy it!

Our cat's daring feat was to climb the telephone pole and "launch" himself to the middle of the busy street. Poor Tiger, he didn't last long. :(

(I liked this post so much I'm going back to read it again. You've captured, perfectly, how a cat must think.)

Oh you know it, Justrun! She could've given walking lessons to a flock of newborn chickens.

Hey Beth, thanks! We're bringing her to Manitoba this summer as well, so she can tell you about it in person.

Awww, thanks Deb! You're making me blush and such! It's fun getting inside a cat's head sometimes. They think they are being so inscrutible, but really they are totally scrutible.
Poor Tiger though!

He is rather springy Barb, and I have seen him launch off of the floor before, but usually it's a death defying leap from the back of a chair, or sofa, with little warning. The landing isn't always graceful, and always a bit painful!!!!

That cat is all that and a bag of catnip.

Our American cats are willing to take that challenge! My sister's cat loves to pull that I'm-stranded-on-the-roof routine, only to Rocky off the roof herself.

Youch! Your shoulder must have permanent scratches on it, Mel! Actually mine does from our looking out the window ritual, where Sputty sometimes gets a little excited and does the claw flex thing into my shoulder.

I'm not going to tell her that though, Just A, as that little kitty head of hers is plenty swollen enough already.

I am so glad to hear that, Beth! I sorta figured Sputnik was being all jingoistic with her attitude. It's good to know she can't pull anything over on her American cousins.

I just noticed your going to the Sled Island Music Festival tonight- I'm also going to a concert tonight (The White Stripes in Iqaluit!!!). I haven't been to a concert since the Hip back in 2000.

You got the White Stripes tickets then, John? Yay! I'm really glad that you get to go, you deserve some concerting. I'd love to hear about it.

Yes, I'm getting pretty pumped for Sled Island. Sadly, there are way too many shows for me to go to all the ones I want, but I won't be greedy.

Yeah, she planned that. Totally. 'Cause that's how Sputnik rolls.

She's done it again since, PF. It's become her party trick, I think.