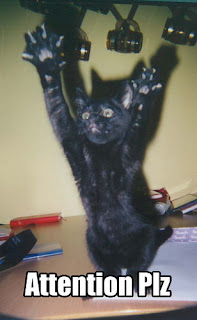 Everybody join me in singing Happy Birthday to Mel.

Happy birthday to you
you belong in a zoo
you look like a monkey
and you smell like one too.

We mean this in the nicest possible way, of course.
*~*

Obviously somebody forgot to tell me that it was Dress Like a Superhero Day at work today, because a suspiciously large number of people at the meeting today were wearing scarves, nattily draped scarves arranged in a variety of complicated poses on their persons, which I would never be able to pull off in a million years without breaking into snickers everytime I caught a glimpse of myself.

They looked very heroic, like they had powers of flight.

I think I would like the power of infinite do-overs. Then I could travel down all those roads not chosen and see where they would have led me. Plus I could try all those urges that I could never act upon but which hold a evil spell over me, without any permanent consequences. Like the urge to stick my arm into the running garburator, or to drive off the side of a bridge, or to ram into the back of the police cruiser stopped in front of me at the red light, like I had the urge to do today. You know, just to see what would happen.
Posted by Barbara Bruederlin at 3:24 pm

Email ThisBlogThis!Share to TwitterShare to FacebookShare to Pinterest
Labels: singing happy birthday like an 8 year old boy, why hasn't that character on Heroes - the one who has powers of instantaneous regeneration - ever developed cancer?

Claire is the character from Heroes, though Peter absorbed this ability, as did Sylar in the Dark Future.

Everyday I thank the powers that be that there are so many people on the internetz who can fill in those blanks like you just did so admirably, Anony.

Teeheee! *huge grin* Thanks Barb! So , if you had infinite do-evers as your super power, would that make you Mulligan Woman? (mulligan is golf term for do-over I heard...I hope that's right)

Yes! I shall be Mulligan Woman! Thanks, Mel - you are beautiful AND smart!

I am very much looking forward to Halloween this year - I am going as bird girl from Harvey Birdman. Does a wannabe superhero count?

Also, can't wait to get tickets to Wolf Parade this afternoon. Even one for the guy who says September is too far in advance! Apparently government super spies have to be available at demand!Ha!

Thanks Barb and Serah! I can't decide what super powers I would want. Maybe the power to heal people instantly, including myself. :O) I'm sure we could come up with a funny name for me ....

I would like the ability to stop time please, and being able to teleport would be most awesome.

Lately I have been thinking the power to silnce people would be nice (especially at work). Yes, I would like to be....
Shut The Fuck Up Man!
More powerful than a ball gag!
Able to silence crowds with a single finger!

I have just discovered I can Has Cheezburger.com. Awesome, if you haven't been there already/

Flying would be my superpower. I've always wanted to fly. When I was little I had a dream that I flew over the neighbour's ditch and I was fully convinced that it really happened. I went out in a big wind, stood on the picnic table and whirled my arms around until they carried me up and over. As you can see, this is pretty damned important to me.

i would like to have a superhero power that would allow me to make people care about important things and as Allison said, to stop time, that would be so sweet to "have more time" to do things.

Mel, you could be Bye-Bye Boo-Boos Woman or maybe Jimmy Swaggart.

Grrr, bloody stupid Blogger!
Teleportation would be extremely useful, Al, and you wouldn't even need Scotty there to beam you up.
I'd suggest going one better than the ability to stop time, and that would be to have the option to actually reverse time. Sort of like David Bowie is doing.

And I'm guessing it would not be the index finger, Fearless. Shut the Fuck Up Man does have a certain ring to it.

My daughter is always showing me stuff from I Can Has Cheezburger, Wandering Coyote. I love it! And I don't even has a bucket.

Oh sweetness! I can just see little Deb out there in her nightie in this huge windstorm, trying to fly off the picnic table. It ws obviously a pivotal moment.

More time is always needed. And you know what, Evelyne, I think you already possess that superpower to make people care about important things. Your passion for the environment is contagious.