Bands who deserve to be stinking rich (an occasional series): David and the Citizens 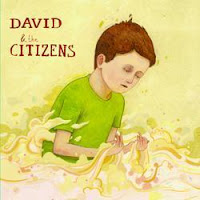 Every so often I find myself grooving to a band that I really enjoy whom hardly anyone seems to have heard of (and whose music is damned near impossible to find) and I find myself wondering why is this band not better known, why are they not stinking rich?

So occasionally I will be talking about some of those bands, trying to spread some of the love around, and I shall start off the series with a Swedish band who was first introduced to me by the lovely and talented Allison.

I listened to David and the Citizens quite a lot when I first heard them. Then, as more new music came into the house, the only cd of theirs which I was able to find got moved further back on the shelf, although I did put them onto some mixes. Last week, though, the cd pictured above found permanent rotation in my car, in my kitchen, and pretty much wherever else I could spin a disk. These guys are actually pretty big in Sweden and they are just so good. Their music is criminally infectious - upbeat and highly melodic, while at the same time being highly personal and often in the acoustic vein. On their website they offer lots of music from their vast back catalogue, including mp3s and streaming of the songs on their upcoming 3rd full-length release "Stop the Tape! Stop the Tape!", which has a somewhat darker, less organic sound, the acoustic guitars have been liberally replaced with electric.

Frontman David Fridlund, pretty much the only unchanged citizen since the band's 1999 inception, has a wonderfully emotional voice, passionate and pleading, with just the slightest hint of a very endearing lisp. I admit I'm not sure which roles the other band members fill, but somebody sure does some great handclaps, and horns! And those are always welcome around the Zombie house.

If you are looking for some music you may not know, do yourself a favour and head over to David and the Citizens' website, where you'll find lots of great music, tonnes of photos adorably labeled in Swenglish, and loads of other goodies, including a shout-out to another great band that not enough people have heard of - Neutral Milk Hotel.

In the meanwhile, you can take a listen to these:
.
Graycoated Morning
Let Me Put it This Way

Posted by Barbara Bruederlin at 6:36 pm

Email ThisBlogThis!Share to TwitterShare to FacebookShare to Pinterest
Labels: bands who should have been way bigger, David and the Citizens

Sweden is where new is AT. Honestly, so much good stuff coming out of there lately, and now I must thank-you for reminding me about these fellows! It'd been a couple of months. I think I need to add new cds to the car, some PB&J too.

I love David & the Citizens website, it actually had a lot to do with how I came to love the band, they offer up so much for free, I knew I had to go out and actually buy a full cd. "Absent Mind" and "Sometimes Forever" are two of my other favs. In fact, I just may go listen now...it'll interrupt my Green Day listening, but the the flip :)

I have never been able to find a full cd in town, just the NA released EP, so I may have to order online at some point. But you're so right, the website is one of the better ones. Ah those crafty Swedes.

Geez, thanks to "the man" I can't get to that site at work! It's traumatic, I tell you. Not Paris in jail traumatic, but close.
I will visit from home.

I have to agree with Allison. It seems Sweden is the new musical factory for the World.

Is it better to be big in Sweden or big in Japan?

I will check out their website. By the way...tag, you rock.

Yeah, David and the Citizens should be rich. Their songs are quite good. I bet they have day jobs, though. Baffling it is really. In my college days it blew my mind that all these great musicians actually worked for a living. But now it all makes sense. Still makes it sad, though.

"Mom, it's not right! It's not right!" Oh wait, that WAS Paris Hilton traumatic, Justrun, and you said NOT PH traumatic. Still a bugger when the man won't let you play at work though.

They make all the musicians at IKEA, Just A. If you look closely you'll see they all come with an allen wrench.

Ooooh, I be tagged by a chick who rocks! Cool, Beckeye! Umm, I think it's better to be big in Serbia, actually.

You've got the insider knowledge now, Will. I hope the magic remains though.

You should choose another pic. None of these guys are David nor in the band anymore...

Thanks for the information, Kina, and welcome! I knew that the band's lineup had changed quite a lot, but I didn't realize I had picked a photo with no current members! hahaha!

I do like that pic though, with the parkas and sausages.

Did you know the singer of D&tC, David Fridlund, now lives in Austin Texas?