Are we newshounds or publicity whores or just masochists?

It's the anniversary of some pretty important events in history this month.

Forty years ago, the Six Day War changed the geopolitical outline of the middle east, with Israel gaining control of vital strategic areas of the West Bank, the Gaza Strip, the Sinai Peninsula, the Golan Heights, and parts of Jerusalem.

Eighteen years ago, Chinese student were instrumental in a sparking a series of demonstrations in support of democracy in Beijing's Tienemen Square. The military crackdown left hundreds dead (although the exact number may never be known) and led to widespread arrests. Many of those arrested are still being detained. 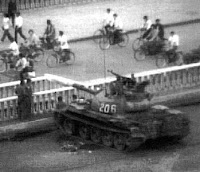 And what are the newspapers plastered with day after day after day this month?
Coverage of the incarceration of a certain empty-headed spoiled hotel empire heiress.
Give me a fucking break. 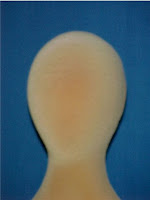 Posted by Barbara Bruederlin at 8:27 pm

Email ThisBlogThis!Share to TwitterShare to FacebookShare to Pinterest
Labels: that's not news

I think the newspaper editors need to unstick their heads from their asses all right!! *hand claps for a wicked awesome post*

I've been thinking a lot about those two anniversary events a lot today, and wondering the same thing you are, about the media's choice of coverage.

Is it any wonder why I love your blog?

I am sad to report that our local news did not touch on either Tienemen or the six day war last night. The morning news mentioned Tienemen on their "this day in history" segment but that was it. Even CNN, who is supposed to be a "news leader", seemed to be only concerned with the Republican debates.

Considering the ongoing situation in the mideast and the horror or Tienemen, you'd think the media would focus on these to help us try and learn from our mistakes. But no...

I'm more annoyed every time I watch or read the "news" at how they've managed to get the power to convince us of what's important.

I wonder what Paris is wearing and eating. I wish she could blog from jail. That other stuff was important too, I guess.

I like a touch of celebrity gossip as much as the next guy, Mel, but it is getting ridiculous. And I don't want that particular celebutante to get any more attention. Enough already!

Well it's a mutual admiration society then, Johnny. Because your blog is amazing.

You seem to be the most reliant reporter of news on a regular basis, Karen. Good thing you don't rely on the tely to keep you informed, or we'd all be in trouble.

It's like they think we can't handle anything of any substance, Justrun. I'm happy to report that the reliable old CBC is still reliable, however.

JustA, who's Paris?
OMG I heard she had a makeover and got her nails done, this new shade of pink, and don't you think orange will look soooo killer on her?
Personally I can't wait for the prison hip-hop album to come out.

Well put Barbara. I rarely turn on the TV anymore because of stuff like this....my God, enough already. And how do you get your sentenced reduced for good behavior before you even start it? Who the hell was monitoring her behavior, Jerry Springer?

I sometimes get the sneaking suspicion that Jerry Springer is behind everything, Deb. Which is one of the reasons I don't watch much tv either.

Thanks Al; I just sometimes wonder why, as a society, we put our priorities where we do.

Seems like what our culture has gone too. Celebrity gossip is the new history.

Couldn't agree with you more, Barb.
I've been watching On The Map (with the always brilliant host Avi Lewis) recently. Tomorrow they're going to a piece on the Tienemen anniversary. Considering it's Avi Lewis, I expect it to be well done.

Barb, I find that reading your blog is often a clear reminder of what's important or worth remembering. Thanks for your amazing way with words and ideas. I must end though with a so-called Paris quote that made me snort!
"When you said it had bars, I thought..."

That's so true, news people seem to forget what is important, I watched the new today and on RDI it was only on Today in History and it was a very very very short segment. News suck sometimes

That's a sad statement, isn't it, Will, but I fear in a lot of ways you may be right - and Entertainment Tonight is the new Holy Grail.

Thanks for the heads up, Becky, I'm going to try to watch that. Avi Lewis is very smart and very watchable.

Bahaha, didn't take long for those PH prison jokes to surface, did it Berni? Thanks for your sweetness though!

I'm not sure what the news coverage is usually like on RDI, Evelyne, but I sure prefer the news to be presented with some depth and a lot of background - sort of like The Hour used to do, and the way As It Happens on CBC Radio One still does.

well ill admit im disappointed she isnt in with the regular jail population....ha ha ha but i couldnt give less of a shit that she isnt allowed to pluck her eyebrows hahaha

Yeah, the news sucks-- it's a joke. That's why everyone here acts as dumb as a chicken with its head cut off if something huge happens.

Wait - that was a chicken-or-the-egg thingie - maybe the news sucks because dumb people don't demand better of their news organizations. sheesh.

Well, PF, the latest trials and tribulations of the hotel bobble-head were front and centre in my newspaper again this morning, so I know that all is right with the world. Oh yeah I think they mentioned something about the G8 summmit too.

The Globe and Mail is on its way to your house to ask you what you had for breakfast, Dale. You're going to be on the front page!