Who decides what art is anyway? 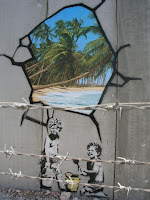 The Calgary police have just wrapped up a seven-month investigation into acts of graffiti, ending in the questioning of eight males, between the ages of 16 and 24. The police admit the graffiti targetted is of the hip-hop rather than the gang-related stream.
Meanwhile gang members are shooting at each others from passing cars on a weekly basis, and occasionally tossing molotov cocktails into each other's houses.
I really have to question the priorities in play here. Personally I don't have an issue with graffiti. A lot of it is beautiful and compelling and highly creative. Yes, there is the issue of graffiti being used to mark out gang territories, but police admit that this particular lengthy investigation did not target gang markings.
This story puts me in mind a little of another recent graffiti story in the news. In March a valuable Banksy piece was inadvertently painted over by a graffiti removal crew. I guess that's one of the risks you take when your art is done on someone else's property.
For the record (no pun intended), my one of my favourite recent Banksy perpetrations was the doctoring of 500 copies of Paris Hilton's cds. The man has won my heart.
So I ask you, my friends:

Is graffiti art?
When a work of graffiti becomes recognized as art, should it be afforded some degree of protection or does that in fact fly in the face of the very concept of graffiti?


*~*
Friday Random Playlist coming at you:
.
Blackout - Muse
Put Out Your Lights - Matthew Good
Grounds for Divorce - Wolf Parade
I Danced - Violent Femmes
And He Shall Purify - Handel
Upside Down - the Jesus and Mary Chain
Testosterone - Bush
Wonderful and Sad - Hawksley Workman
Games Without Frontiers - Peter Gabriel
Hand in Glove - the Smiths
Have a fantastic weekend, all you creative rebels. Go out and do something beautiful and subversive.

I'm going to be bopping my head along to the criminally catchy sounds of Peter Bjorn and John tonight, and will give you a review of the concert tomorrow. No doubt I'll be speaking in a Swedish accent.
Posted by Barbara Bruederlin at 8:56 am

Email ThisBlogThis!Share to TwitterShare to FacebookShare to Pinterest
Labels: Friday random playlist, submitting to the Swedish invasion, you can't draw on my wall

I'd say it wouldn't be graffiti if it were condoned. Is it art...hmm, I'd put more in line with doodling but on a grand scale.

YES, I WOULD CONSIDER GRAFFITI ART. AND NO I DON'T THINK IT SHOULD BE PROTECTED, ITS THERE FOR HOWEVER LONG ITS LIFE IS.

I have to agree, Leazwell, condoning it removes the graffitiness. Doodling on a grand scale is a good description of a great deal of graffiti (and we're talking pretty grand sometimes), but I would suggest that a portion of it has true artistic merit.

I like your attitude toward graffiti's longevity, Al. It's like a sand sculpture or something similar in that way, only less organic.
Banksy is pretty amazing.

Someone else posted this very question recently but for the life of me I can't remember who. Anyway, yes, I loved the whole Paris Hilton thing.

I love graffiti, and would definitely consider it art... Edmonton has some really awesome graffiti artists. One is the person who does the listen art
http://www.flickr.com/photos/listen1/
(Sorry for that complete plug of Edmontonian artists!)

I've always had a respect for amazing graffiti artists, to me they are an important type of artist and people like Banksy represent something more that we need in our society nowadays.

It's always cool to see graffiti that's well done in Calgary, there's a fence by Kensington Rd. that showcases some local graffiti artists, it's very cool.

Some graffiti is beautiful, no doubt. Maybe less so to the person who wakes up one morning and finds it on his garage door or other property.

The problem with graffiti, gang-related or no, is that it's presence in a neighborhood indicates that no one cares enough to clean it up, or no on e cared enough to call police while it was being done. This can contribute to an overall perception of lawlessness in a neighborhood, and make it easier for other, more serious crimes, to occur there.

There's one simple rule; if I can do it not's art.

The Paris Hilton thing was deliously subversive, wasn't it, John? Makes me want to be a pirate or a Viking something.

Plugging of artists is certainly condoned here, Becky! I'll go check out that site, thanks. Speaking of Edmonton, if you are planning to attend the Edmonton Fringe this year, may I recommend you see Eat My Brain. It's loads of fun!

Banksy forces us to think, Hilary, and that is what makes his art so important. The stuff he did on the West Bank wall in particular makes a really powerful statement.
I saw some really great stuff in Mission yesterday too - will have to check out Kensington.

I'm glad you weighed in on this, Bubs. I was hoping to get your law enforcement perspective on this. I can certainly see how the presence of graffiti could act as an indication that the property is unsecured. Having never been graffitied myself, I guess it is easy for me to sit here and say that I don't see what the issue is.
I still think it's a little heavy-handed however, for our police force, which is already shrotstaffed, to spend several months to track down 8 boys with spray cans.

I am so glad you have unequivocally clarified that for us, Just A. Remind me to give your next art show a wide pass.

I consider some of it art. And when I have to sit and wait for a train to pass for 10 minutes, it gives me something interesting to look at.

I think that sometimes the police have their prioirities all messed up. These guys are using their time constructively and could be doing things that are much worse.

I recall an example of that that I've blogged about. A guy drove head on into me in my lane as he talked on the phone in one hand and drank a coffee with the other (leaving what to steer with?). I pulled over and called police, as he pulled into a driveway and was sitting in his car. They didn't care/wouldn't come. Yet a week later Dad got pulled over for going through the amber light too slow. Seriously, no word of a lie. Figure that one out?!

Time for them to go catch some real criminals.

Loving the list Barbara. I love graffiti (minus the gang thing) and think some of it is incredibly artistic and worthy. I do not however want a graffiti'd freight car in my art collection.

I remember you telling that story, Deb, and just shaking my head at it.
And I also understand what Bubs was saying about graffiti being an invitation to other crime as it indicates that nobody is paying attention to the property. But maybe we should just cleanup the ugly stuff and leave the graffiti that appeals to us. I've watched many a train go by as well, just marvelling at some of the skill in the tags.

Some of the best graffiti I've seen has been on sides of freight cars, Dale. I think it would be totally cool to have a freight car in yoru front yard. Don't tell me you haven't considered it.

Awwwww thanks, John! I'll be working on doing a whole lot of nothing today.

Deb said...
This comment has been removed by the author.
9:16 am

(that was me, sorry)

Sending the love right back to you Barb. And I:

HOPE YOU FAMILY READS THE GOBSMAKERY ON YOUR SIDEBAR AND ENSURES YOU DON'T HAVE TO WORRY ABOUT ANY MEALS TODAY. HINT, HINT.

FAMILY, ARE YOU READING THIS? (I hope so).

You deserve it Barb. You are a wonderful lady...Happy Mother's Day to you.

Those links were fabulous. I am with Alison 100% on all counts :O) (how lazy of me eh? heehee Happy Mother's Day Barb *HUGGLES*

Thanks Deb! I am quite blatant about letting them know that I will not be involved in any discussions revolving around meals today. Although I did heat up some leftovers for lunch, oh yeah and then cleaned that up too - wait a minute! - that counts as a meal. Damn, foiled again!

Thanks Mel! Laziness is not only encouraged today, Mel, but absolutely insisted upon!

Bubs said what I was going to say, but much better than I could. When our neighborhood gets tagged, whether by the "tagger" subculture or gangs, it's percieved as a big "fuck you" to the neighborhood.

It's actually also percieved as pathetic in my neighborhood. As the neighborhood has gentrified, the folks like me who've lived there 20 years have enjoyed seeing the thugs pushed out-- when they come and tag the neighborhood, it's their last gasp at claiming some kind of ownership of a neighborhood that no longer has a place for them.

It does often look pathetic, especially here in Japan - but yes, it occasionally looks beautiful.

I'm starting to undertand how graffiti has a different impact depending on whether your property is targetted or not, Johnny. I guess my stuff has never been a canvas.

Is graffiti culture as large in Japan as it is in the west, Danny? I imagine it is growing.

One definition of art: Art is that which is made with the intention of stimulating the human senses as well as the human mind and/or spirit. There is no general agreed-upon definition of art, since defining the boundaries of "art" is subjective, but the impetus for art is often called human creativity.
Another definition: Great art is the outward expression of an inner life in the artist, and this inner life will result in his personal vision of the world.

Hi k.b. and welcome! Thanks for weighing in on this. I see that you are an artist yourself, and wonder if you feel that graffiti would fit into those definitions of art which you put forward. I would, as long as we disregard the unimaginative form of graffiti which is really just a name tag.

Graffiti is art, no doubt about it. Just look at artists like Basquiat and Keith Haring who both started out as some kind of graffiti artists.