theatre and art and music, oh my - The Arts - slightly neglected but never forgotten

- this is a review of some events in the arts about which I am quite excited and which are long overdue to be posted here -
. 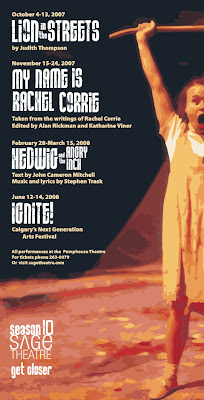 Hedwig and the Angry Inch??
You'd better believe it!
SAGE THEATRE announced their upcoming 10th anniversary season recently, and while I was not able to sneak away from work to attend the unveiling, I am pretty excited about what's being produced this fall and winter.

Hedwig and the Angry Inch, as mentioned, will be produced and promises to be too much fun. Sage Theatre never disappoints when it comes to staging some controversial productions (remember Trainspotting?) and you just know they will pull out all the stops for Hedwig.

Artistic Director Kelly Reay will actually be directing this production and he has assured me that the audience will be welcome, nay encouraged, to sing along. So if you find yourself in Calgary Feb 28-March 15, let me know and I'll take you to a play. We'll go in costume.

Here are synopsies for the other upcoming productions. My Name is Rachel Corrie looks really compelling, too. 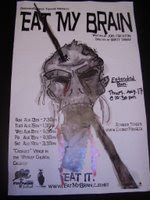 Some of you might recall me talking about Eat My Brain, a play which I particularly enjoyed at last summer's Calgary Fringe Festival.

The playright, Joel Crichton, is currently acting in a dinner theatre production which looks to be quite fun, but is being produced in Red Deer, which is a couple of hours north of Calgary. I won't have the chance to make it up there, but Central Alberta Theatre has the details, if you happen to find yourself in central Alberta sometime between now and June 21, and are just itching for some good dinner theatre.
Joel tells me that they will be putting on a production of Eat My Brain at the Edmonton Fringe Festival this summer, so you lucky Edmontonians will finally have the chance to see this very funny, very engaging play. It's got zombies!
If you do go, would you mind picking up a copy of the program for me? Joel tells me that he used a quote from my review (Lord of the Flies for the myspace generation) in their program description this year. Naturally I am well pleased.
-----*----*---*--*~*--*---*----*-----

I've recently been visiting the site of artist Karl Brännström, a young Swedish artist whose work I am finding immensely compelling. Karl had been displaying much of his catalogue on his site, including a recently commissioned series entitled "portrait of a killer", which is dark, unsettling, and very powerful.

Many of the pieces I have been enjoying have been painted on sheet metal, and they have a wonderful depth and organic quality to them. Karl will continue to upload from his catalogue on a regular basis and will soon start displaying some recent pieces.

Do check out Karl's amazing art.

Don't you just hate it when you discover a band just after they have broken up?

That happened to me recently with Arab Strap. Apparently I had ten years in which to discover them, but no I had to wait until six months after they disbanded to do so.

Posted by Barbara Bruederlin at 8:30 pm

Email ThisBlogThis!Share to TwitterShare to FacebookShare to Pinterest
Labels: the arts - not just for breakfast anymore

I very much like the work of Karl Brannstrom art work. I can't thank you enough for adding that link. I'm headed back there now to check out all of his work.

I thought you might be interested in his work, Toccata, being an artist yourself. And of course you know I have to share with my friends.

I'm looking forward to seeing some of Karl's upcoming work as well.

Very interesting stuff. Some of that artwork reminded me just a bit of Francis Bacon. Very dense and kind of threatening.

We're big fans of all things zombie here. Let us know if you make it to the play!

It sounds like you've got a lot of cool festivals up there. My eldest is planning on attending some horror themed convention in Toronto this summer.

i saw hedwig performed a couple of years ago. i loved it.

I've not seen Hedwig yet, but my roommate loves it.

I finally saw my first Broadway show last week - "Talk Radio" starring Liev Schrieber. I never saw the movie so I had no expectations. It was very good.

Clicked over to Karl's site, I really like what was showcased, even more that it was done on metal. I can see why you found him compelling. Going back to read more, I just looked at the pictures this go ;)

HEDWIG - on stage??? omfg how marv is that!!!!!???? I cant even imagine in this brain of mine how truly twisted and delightful that would be!

I didn't think that you meant Shakespeare's contemporary, Bubs, but had no idea who the other Francis Bacon was. Thank god for google. Yes, Karl's work has that depth and density to it.
That sounds like a fun convention that your son is planning to attend! Will it be film-based? Hopefully there will be a few zombies in attendance. Because nothing says party like a member of the walking dead chewing on your arm.

I've only seen the film, 668, but apparently Eva's film studies teacher played bass in the first Canadian production of Hedwig. Small world eh?
I am very pumped for this show.

I hope you get to see more Broadway shows, Beckeye. It would be pretty much criminal not to. I didn't even know Liev Shrieber was doing Broadway - he's a busy dude!

I figured with your love of abstract that you might like those pieces, Al. Aren't they so rich and deep? I can look get lost in them for a long time.

Won't that be wonderfully subversive, Jen? You should come here and I'll take you to see it.

i have never seen the film.

i hope you have as interesting experience as i did. i saw the play in a lesbian bar with the man who sat next to me, in what i can only assume was an attempt to prove that he was straight, lamely trying to maul me. in which he failed in both respects. my gaydar was going off like my neighbour's car alarm. :)

I love Arab Strap and also the Eat My Brains poster is rad.

I'm pretty sure my theatrical Hedwig experience will pale by comparison, 668, but a girl can always hope.

I have that Eat My Brain poster on my bedroom door, Just A. True story. Which I guess kinda demonstrates just how juvenile I really am.
I'll bet you didn't wait until Arab Strap disbanded before you discovered them either. Man they're grand!

I saw Arab Strap open for Bright Eyes a few years back. At first I thought there songs were just great ... and then the performance just got more interesting because the singer just got drunker and would mess songs up and some of the other members looked irritated. Then they sang "You Shook Me All Night Long." Good times...

That sounds like a truly memorable concert, Will! I can actually see Arab Strap acting that way. I think the frontman, whose name I forget, is a bit of a wild card.
You Shook Me All Night Long by a drunken Arab Strap would be quite brilliant, I think.

Hedwig? Oh man (or woman), I'm jealous. I love the film and the feature length 'making of' on the dvd but would love to see it live.

Dale, you can see it live. Easy-peasy. Just come to Calgary between Feb 28 and March 15 and I will take you to see it. It would be my privilege and pleasure.

Hmm, mid-winter Calgary, something says chilly. Something to think about though.

Meh, it's a dry cold, Dale. Actually the winters aren't too bad, as there is always another chinook just around the corner. That time we got snow in July - now that sucked!