sing along with the common people 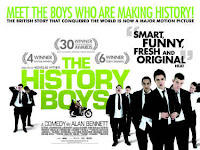 I'm a Jew... I'm small... I'm homosexual... and I live in Sheffield ... I'm fucked
We watched The History Boys last night. Essentially it really is Dead Poet's Society, with homosexuality, but it is such a charming and endearing little film that it is well worth seeing. And as it takes place in a boys' school in Sheffield in the 80s, there's a killer soundtrack as well. Well worth seeing.

And it being set in Sheffield of course made me think about one of Sheffield's favourite sons, the mighty king - Jarvis Cocker. Jarvis played Vancouver last night, a show which, had it been at an all ages venue, I would have made a serious attempt to attend with Eva. But alas we were forced to save our money. Did anybody hear any reviews?

I've been listening to a lot of Pulp lately. I'm coming at an appreciation of Pulp sort of backwards, as I never paid them too much attention before, but since I love Jarvis so much I've been listening with a keener ear. They really were pretty great, especially for a band started by a 15 year old Jarvis.

This video of Common People makes me lol. It's pretty cheesy, but such a great song, and Jarvis is still such a baby, but oh so sassy:

Time to hand out this week's Labia Award. The field was stacked once again this week, making this judge's job exceedingly difficult, but it is with great pleasure that I announce that this week's winner is :

Beckeye
for
.
Don't call it a comeback, she's been a whore for years
.
You have to admire a blogger who calls a spade a spade.
Have a fantastic week everybody. Don't forget to save some time to play.
Posted by Barbara Bruederlin at 3:02 pm

Email ThisBlogThis!Share to TwitterShare to FacebookShare to Pinterest
Labels: Labia Award, she told me that her dad was loaded so I said in that case I'll have a rum and coca cola, Sheffield boys want to go to Oxford because that's what the all the other boys want

I loved that video. The colours made me happy wee! LOL! I will keep an eye open for "The History Boys" !

When I clicked the video my computer froze up and I had to restart it. I'll try again later. Did you enjoy this movie more than Dead Poet's Society? I wasn't fussy about DPS, the suicide did not ring true to me.

Posner is made of so much win. If he were born ten years later he would have been the ultimate twee kid.

On the one hand I'm enjoying finding out about bands I'd never heard of--you've done that a few times lately.

On the other hand, I'm feeling kinda stoopid because I've never heard of these bands.

Wow, my first Labia Award. I have so many people to thank. I hope Chad Lowe is somewhere crying right now.

Ooops, sorry Toccata, didn't mean to put a curse on your computer.
History Boys was much better than Dead Poet's Society, funnier and less earnest.

TTTF - Posner was totally adorable. He brings the twee like it's never been brought before.
And Jarv is rather godlike.

Bubs, it helps to have a walking music encyclopedia for a daughter. You actually find all your amazing stories on your own, I depend upon my kid to keep me up to date.

A well deserved win, Beckeye. The academy salutes you.
Disco 2000 is a great song - have you heard Nick Cave cover it? Pretty great actually.

Well, a friend of mine saw Jarvis in SF and said he was quite fantastic. I was a little late to Pulp myself ... but my favorite is probably "This is Hardcore" - I just love the instrumentation on it. I've finally gotten to listen to Jarvis a little and it really is everything you say it is.

Must watch the History Boys ... been so long since I've seen a film of any kind.

I've heard so much about this movie lately, but still haven't been inspired to actually rent it. But you haven't steered me wrong before, so I'll give it a shot.

Man, that Jarvis is tall! He could totally rock those stilettos from the post below. Me thinks its time I listen to some Pulp. Yep, best get on that.

You know what really impressed me about Jarv's tour, Will? On his site, he was asking people for suggestions for local opening bands for each city he played. How cool is that?

Yet another teacher film, eh John? WE liked this film, so I hope I don't break my perfect record and steer you wrong.

Jarv could rock those stilettos, Al. He's got the right attitude, although these days I think he wears considerably more sensible footwear.

Barbara, you've been tagged. I want to hear about some Canadian restaurants.

I can't wait to tell you all about Tim Horton's, Bubs. Kidding, but I do consider this an excuse to do some serious eating. Strictly for research of course.

Jarvis is supercool、though he nicked the 'carrier bag/Oxfam' look from Mark E. Still, what he's achieved is incredible, and the last album was great - there's a lot embedded.

The old stuff - Lipgloss and the whole of Hisn'Hers is the soundtrack of a time spent wondering what to do with life and enjoying the vaccuum. In fact, all the Pulp albums are wonderfil, but the fave track right now is Trees.

I feel so exposed to brand new stuff when I visit your blog! (Exposed in a good way, of course.)

Danny, Jarvis will always be cool whether he is swivelling about on stage or changing a diaper. He just can't help it. And I am rather glad he didn't nick Mark E Smith's attitude or facial expressions.
Isn't it funny how music evokes such memories? Sometimes bad memories can ruin a good song, but that's a risk you take with life.
I really do need to dig deeper into Pulp's catalogue, though - I have my work cut out for me.

Justrun, I hope that it is a gentle exposure and that you are not left standing there with your knickers hanging out.

I've been wanting to see The History Boys. Glad to see you have given it two thumbs up.

It really is an enjoyable film, Leazwell. At times you can tell that is was originally a play, but that is not a bad thing imo.

Nick Cave covered Disco 2000? Wow. I'll be looking for that.

Love Beckeye's labia so to speak.

Wasn't the film actually made after the success of the Broadway play? I think I might give it a go one of these days.

I'll have to post that Nick Cave cover, or send it to you, Dale. It's pretty good!
Beckeye's labia is spectacular, and yes The History Boys was filmed after a very successful stage run. You can tell at times that it was originally a play, which is never a bad thing.