There's a reason why Joel Plaskett has a reputation for being one of the nicest guys in Canadian rock. Because he is.

Tuesday night's concert at the Grand Theatre flew in the face of the usual Tuesday night (worst night of the week to put on a show) concert doldrums. Joel was laid-back and chatty and completely at ease with the audience, telling stories of the previous night's show in Banff, making up new lyrics for Love This Town, wherein he added references to Calgary and the Saigon Y2K restaurant where they had eaten supper that night. The crowd ate it up.

And Joel Plaskett sure knows how to rock. With more than 15 years of performing under his belt, I'm guessing a lot of it in bars, he manages to play a more straight-ahead style of rock that appeals to the bar-going crowd, while still maintaining his completely independant style. While I've always had a lot of admiration for him, I've never been completely overwhelmed by the music itself. I've always enjoyed it, but never been completely in love with it. But a live Joel Plaskett show is another animal altogether - the songs are crisper and rockier and more anthemic - even the considerable acoustic songs in his catalogue. Watching the Joel Plaskett Emergency perform is a real joy.

The audience were probably one of the best I have witnessed in a long time. This was a slightly different crowd from the usual gaggle of indie kids - there was nary a skinny jean nor a frock/cowboy boot ensemble in sight. This crowd favoured the relaxed fit jean and non-ironic t-shirt. Definitely more bar scene than art house look. But these people could rock, and they were completely in the moment- singing along, cheering loudly. For a Tuesday night crowd, hell even for a Friday night crowd, they were completely awesome.

Peter Elkas opened the night, and while I recognised that he was really talented and his band was very tight and that the performance was topnotch, I was strangely unmoved by it. The crowd loved him, but the more soulful romantic singer-songwriter offering did little for me. Plus I thought there was too much organy keyboard and it started to annoy me after a while. But the problem was not with Peter Elkas or the band (unofficially known as Elkaholics), it was with me. I most likely had a touch of PMS or something.

I did feel really badly about not liking his set so much though, as he 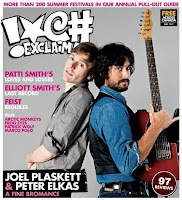 played keyboards and some bass with the Joel Plaskett Emergency for their entire set, and then Elkas was so sweet and accomodating getting his picture taken with our friend Ruhee in the lobby later, despite camera woes. He even came back for a second photo attempt as he promised he would, so I really need to give his music another chance, I think. Besides he's a serious hottie.

It was a show well worth going out for on a Tuesday night. If you ever get a chance to see Joel Plaskett perform, my advice to you would be - DO IT.

Nowhere with you - Joel Plaskett Emergency

Posted by Barbara Bruederlin at 8:11 am

Email ThisBlogThis!Share to TwitterShare to FacebookShare to Pinterest
Labels: it's safe to go to concerts again on Tuesday nights

If he does come to town I'll be sure to see him just because he's a serious hottie. I love my hotties serious.

I'm glad to hear that Joel is better in concert, I've always been rather wishy-washy with his music, but he does seem like he would put on a good show.

Too much orangy keyboard? Never! Actually, I had never heard of this band before so I can't judge. He is pretty cute. I don't know why, but he made me think of Jian Ghomeshi. Is he returning to SLC this summer, do you know?

I couldn't agree more, Just A. There's nothing worse than a frivolous hottie.

An orangy keyboard would have been kinda cool, Al, but this one was organy. *insert big shit-eating grin here* I thought it was overpowering the rest of the music, but maybe that was just on account of where I was standing.
Peter Elkas does have similar colouring and the whole shaggy hair thing to JGho, you're right. He actually has a new show, Q, so I really doubt he'll be back on SLC.
I was really glad that Joel put on a great show, because he really is a sweetheart.

I bet a plain old acoustic piano would have made a world of difference. I find I cannot tolerate the "fake" organy sounds.

A Tuesday crowd is probably more into the music than looking the part of a cool in the know artsy type. Sounds like my kind of crowd.

Dave Marsh apparently IS hot, Anony. Well they were ALL hot, but Dave was the hottest, because he was banging on the drums all night.

I think you may be right on all counts, Toccata. Although I do like some organny sound (and I can't generally tell if they are fake or real), this time it overpowered the other instruments.
It sure wasn't a "hey look at me crowd", which was pretty refreshing.

Totally unrelated but you might find it interesting. My sister's ex played bongos on stage w/ PB & J during Young Folks, at the Commodore in Vancouver. Also had a little blurb about his performance in the Georgia Straight. Can you tell we're all soo proud!

Also, lolz at the word bromance

I love that song "No Where With You" !!!! *dancing around* Thanks Barb.

I loved your review. Its so awesome that you are giving Peter Elkas the benefit of the doubt, and offering your mood as a reason you didn't enjoy that performance. Sometimes you just have to be in the right mood for certain artists or genres right. Have you ever been very irritated by Reggae? You just KNOW you are in a bad mood then hehe! I hope the next time around it's more enjoyable :O) xo

That's pretty damned cool, Serah! PB&J didn't haul anybody up on stage during the Calgary show, but I sure would have played bongos with them, had I been asked.

A little bromance is a beautiful thing, Anony.

Wooo, glad you are enjoying the little touch of Plaskett there, Mel! It's a pretty darn catchy song, n'est pas?
You are right though, you have to be in a pretty foul mood to be annoyed at reggae (and I'm sure I've been there). Sometimes I get annoyed at happy music, though.

Talking about Peter Elkas as a hottie. That's was why I went to the concert in the first place.
Now he's eye candy.

He's easy on the eyes, no question about that, Karen.