music to my years

Copying Mel and Dale, I tag myself:
What was the first recorded music you bought?
Born to Be Wild - Steppenwolf

The most recent?
It was a banner day (two were used cds, so stop looking at me like I just spent all the grocery money on drugs):
- Ongiara - Great Lake Swimmers
- In the Morning - Junior Boys
- Employment - Kaiser Chiefs

What was the first professional music show you ever went to?
Gordon Lightfoot

The most recent show?
Born Ruffians / the Hidden Cameras

What's your desert island album?
After much soul-searching I have narrowed it down to three, all of which I consider to be classics in their own right, but each of which have characteristics which make them particularly suitable for a desert island:
- OK Computer - Radiohead
(aside from the magum opus status, this record would make me glad that I am safely insulated from the world on that desert island)
- Screamadelica - Primal Scream
(I'd feel stoned the whole time and that can't be a bad thing on a desert island)
- In the Areoplane Over the Sea - Neutral Milk Hotel
(just me and Jeff Mangum trying to drown each other out in a howling contest; good times, baby!)

What's your favorite album/song title? (not the actual album or song)
Really, almost any Ballboy song title would fit the bill. I've narrowed it down to either:
- You Can't Spend Your Whole Life Hanging Around with Arseholes
- I Wonder if You're Drunk Enough to Sleep with me Tonight
- Donald in the Bushes with a Bag of Glue

What's your favorite album art? (include an image of it if you can) 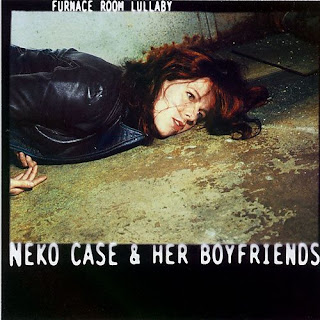 Is that deliciously creepy or what? Neko plays dead real good.

You hate that song … but it won’t leave your head if you hear it.
Jet - Wings
runner-up: Jump - Van Halen

Which is cooler — vinyl? CD? cassette? 8-track?
It's all good, although vinyl has the nice big album art, cds are easy to play in the car, and 8-tracks have that quasi-retro chic. But face it, MP3s rule the world, essentially.

I tag everybody in the world.

Only one day later than anticipated, it's this week's hotly debated and much sought Labia Award.
I'm a bit more decisive than I was last week (as nobody overfed me any turkey), but still have to declare a tie this week. Sharing the honours are:
-
Bubs
"why I'm a fat shiftless hillbilly"
&
Deb
"premature evacuation"
-
C'mon, you tell me that you could decide between those two beauts.
Posted by Barbara Bruederlin at 7:30 pm

Great list Barb. I can forgive you for getting Van Halen stuck in my head...this time...

Excellent reasoning behind 'which is cooler', couldn't agree more. Ballboy really has the best titles, and lyrics, I was listening to them this weekend and marveling some. I have never listened to Neutral Milk Hotel, but if it makes your desert island cut, I shall have to check them out!

hahaha you are too kind, Al, I would never forgive anyone for getting a Van Halen song stuck in my head!

Ballboy are awesome. Why they aren't better known is a mystery to me. Maybe they should try playing more than just Scotland and Germany.

We really must do something about the Neutral Milk Hotel void.

I am deeply and truly honored. I am the luckiest fat shiftless hillbilly in the world!

Ooooh a tie! I like it. Self-loathing versus a play on words. They could both write category descriptors for "Win Ben Stein's Money".

I absolutely need to listen to Ballboy now.

And you are also the handsomest fat shiftless hillbilly that I know, Bubs.

They are both good, John, but I hope that wasn't a thinly veiled disguise at suggesting that Labia Award winners should win any of Bad Tempered's money. Coz there is none to be had.

You absolutely do, Beckeye. And if you want to hear more, you can click on Ballboy's website which is linked on my sidebar. They give away quite a lot of their music there.

Everything from your title to your choices of music and labial delights is spot on. Yes, I meant to say that. Love, Dale.

Oh your words sure know how to hit that sweet spot, Dale, you big tease you.