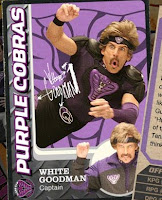 We did not get the 35 cm of snow that we were warned about. In fact, even though it's been snowing since last night, it's been just warm enough to melt on impact. So it's messy, but essentially we are just getting a damned good rain. Might be a different story overnight, but I don't really give a shit because I don't have to drive to work tomorrow.

My laptop went weird on me last night, complete with the power cord chirping oddly and the battery acting weird and the whole thing freezing up and I couldn't turn it off, even with a hard turn-off, oi vey.

I even dreamed about it last night. I dreamed that I uploaded a photo of a battlefield and someone told me that it was actually a worm-virus and if you looked closely at the soldier's helmet you could see a dark spot, which was actually a tunnel through which all my laptop's information was being sucked out. And that made perfect sense to me.

And at work I checked out a few geek sites which pretty much convinced me that I would be without my computer for a few months. I'm as bad as a first year med student, convinced I have everything from leprosy to Munchhausen's By Proxy. I should never try to self-diagnose my computer.

One call to Toshiba fixed everything up. I'm back and you never even knew I was gone.
Posted by Barbara Bruederlin at 7:43 pm

Email ThisBlogThis!Share to TwitterShare to FacebookShare to Pinterest
Labels: what a difference a day makes

I sensed a disturbance in the helmet but I watched cartoons for a while and it passed.

I can relate...I usually call Ty in a panic and he laughs at my crashing computer hysteria. They even like to play little "Mom your computer's got a virus" pranks on me. Just to see my heart stop.

When it comes to computers Stockholm Syndrome is the one you really want to watch out for! Glad to here everything is hunky dory, sometimes when a machine is acting up you need to show it who's boss and drop it from a small height.

"I should never try to self-diagnose my computer." Nice!

Melty snow and the computer is fixed, well that is fine news. I'm glad it wasn't something more. The thing I worry about most on the laptop are the keys going, like I said earlier, my f key is wonky, so I shall use that as an excuse for bad spelling now :)

By the way, loved your dream.

John Mutford said...
This comment has been removed by the author.
5:49 am

Allison, What a ucking key to go wonky, eh?

I loved how you described your dream! It is great that Toshiba has been able to help you.

When in doubt or faced with an adversary, always go to the cartoons, Dale. Bugs Bunny is my homey.

Kids, think they're so funny with their inborn computer knowledge. Actually, Deb, for some strange reason I have been appointed the hardware expert in the household. The blind leading the blind.

I'm so glad to have good friends like you, Fearless, who tell me what to do with my laptop. Next time, I will definitely drop it to keep it in line. Is two feet enough?
And I think it's too late for me - the Stockholm Syndrome kicked in a long time ago.

Oddly I never worried about the keys going, Al, but of course that would become a major issue on a laptop. And if the f key goes, it does force you to become more inventive and use some of that new Brit slang.
I try not to tell my dreams because they are generally of the "you had to be there" variety, but that one was actually somewhat lucid.

It's not a tumah, John! Oh great, now I have computer tumours to add to my list of hypochondriaces. Thanks.

They were really professional and helpful, Evelyne. Sometimes those computer service/tech support lines really do what they are supposed to do. I don't know why that always surprises me.lrmyv

Ahhh, I remember the days of constant self-diagnosis... except it was psych classes that got to me. :)

I hate those kind of dreams. They're so mundane, that sometimes you manage to convince yourself that it must have really happened. I've asked people about conversations I've supposedly had with them before, only to have them look at me like I'm crazy. Then I realized I must've dreamed it. Or my friends are LIARS.

I'll have whatever you are smoking.

Whew! Thank goodness your puter is ok. I will wave a rubber chicken and chant just in case! Appease the computer gods and net gremlins and such.

I've had computer virus dreams before. My computer acutally had green goo oozing from it, as well as puffs of green smoke. The ooozing goo was acidic, and ate through the computer desk. I woke up in a cold sweat, and ran to my computer to make sure it was really ok! Scary shite

Oh sweet Jesus, never self-diagnose during psych class, Justrun! We'd all be committing ourselves before the third lesson.

It's a giant conspiracy amongst your so-called friends, Beckeye. They all have their designs on your millions.

hahaha maybe that was the problem, JustA, hallucinagenic fumes from a melting computer. But the power cord really WAS chirping. It happens again, I'm taping it.

Bloody scary shite, indeed Mel! Isn't it weird how we get as paranoid about our computers coming to harm as we used to about our babies? Fortunately my baby never oozed corrosive green goo, at least not while I was looking.

It's the worst, Beth, followed closely by PC necrotizing fasciitis.