(Canadian) music is my boyfriend 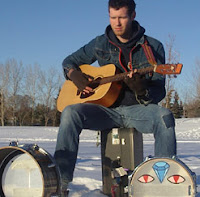 Do you remember back when we were all so young and carefree and full of hope and dreams, last month? And we got all giddy and excited by posting the seven songs that we were currently grooving on?

Personally I remember being mortified that there was not one Canadian song on the list, although there could easily have been. I am here to correct past wrongs, so here by popular demand (at least in my own mind) are the Canadian Magnificent Seven - those seven songs by Canadian musicians that I cannot currently get out of my head:

In the Morning - Junior Boys
This one has carved a permanent groove into my cerebellum, I think. The combination of infectious dance beats and accessible pop melody make it irresistible. I dare you to listen to it.

After the Afterlife - Chad VanGaalen
Our own local wunderkind, none of his songs are ever far from my consciousness. Lately I've been rediscovering this evocative one from his debut album.

Draw Us Lines - the Constantines 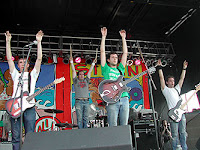 A fabulous hard-driving song from one of the rockiest bands in the country. The simple use of a single bass chord against drums and a wall of feedback just doesn't get any finer. The last time the Cons played here, they opened with this song, with the beginning feedback continuing on and on and on until the band took the stage and launched into it. It was bloody awesome!

Tent in Your Pants - Peaches
You have to love Peaches. She gives out such infectious music that makes you want to dance and the most provocative lyrics from that filthy mouth of hers and then gives us all a big wink to let us on on the joke.

Thank you to Evelyne for this song and introducing me to this band. This lovely song talks of a brother's conversation with his little sister, about their plans for life and how it will affect their family (I think - correct me if I am wrong, Evelyne).

A Sad Country Ballad for a Tired Superhero - Wood Pigeon
Another Calgary band, but one which I am just starting to discover. You may actually remember this song from the promotional cd put out by the Alberta College of Art and Design. Wood Pigeon also have a song with one of the best titles - Death by Ninja.

And that, my friends, is some of what is currently rattling around inside that big empty piece of real estate I like to call my brain.

Posted by Barbara Bruederlin at 2:57 pm

Email ThisBlogThis!Share to TwitterShare to FacebookShare to Pinterest
Labels: Canadian music for beginners, welcome to my brain

I put all the songs from the ACAD CD on my itunes. There is some fine work on that Cd. For some reason Mosquitos and Cars always makes me smile.

I've been rocking out to 'In The Morning' all this time and didn't know they were Canadian...well I'll be. I'm very much loving that cd.

You've picked some excellent songs here, I think I may have to steal this idea from you at some time. On an unrelated, but still Canadian music topic, have you been listening to the Radio 3 podcast lately? I've been kind of disappointed with it, I feel like they get stuck in the rut of playing the same music.

I don't know many (surprise) but promise to change that. Do I need to raise my right hand or something?

I really like that ACAD cd too, Toccata. Kris Demeanor (Mosquitos and Cars) has another great song called "Get Down (You Airborne Bastards)" about allergens.
GLS are definitely one of the finest bands around.

They're from Hamilton, I think, Al - probably BFFs with Cuff the Duke. Isn't that cd awesome? I've been listening to it nonstop as well.
I was actually thinking the other day that I haven't really listened to a Radio 3 podcast since January, I think, and that I needed to catch up. From the sounds of it, there's not much catching up to do. That's a damn shame actually.

Take a listen when you get a chance, Deb; you might enjoy some of them.
The word verification is all-seeing and all-knowing, and it says you need to get to bed earlier.

I keep meaning to ask if you can post that Chad song, I think it's called thousand pound eyelids? I really really liked that one.

Your wish is my command, Mel. Checkist thou thy email.

And speaking of laxatives, I loves me the SHIT out of some Peaches - she's so nasty and hilarious - just what we needed. Nice. I like Downtown best.

Never knew she was Canadian. I went out to the store specifically to get some of her music - they didn't have her, and the clerk had never heard of her. Amateur!

I'm glad that you really like that song Barbara! It is sort of about their plans for life, i translated the lyrics and posted them on my blog. I'll listen to those songs tonight! But I'm so happy that you posted songs by Chad VanGaalen, i've never heard of him before (your blog is the first place where I've read about him) and I really like what he is doing!

They ARE all amateurs in record stores these days, Phlegmfatale, you're right. They really need a refresher course or two on music.
But nasty and hilarious - that perfectly desribes Peaches - she is a breath of fresh air, that one!
I really like Hit It Hard on a workout cd.

It's such a lovely song, Evelyne - I've been listening to it a lot, lately.
I'm really glad that you are enjoying Chad VanGaalen. I think he's amazing.