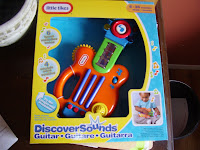 I have turned into one of those annoying people who buy noisy toys for other people's kids. Hey, I warned them! I told her mother if she didn't give me some idea about what her daughter would like for her 1st birthday, then I would buy her a drum kit.

Actually, I think we went one better than that.
Is this guitar ever fun to play with! We really didn't want to give it to her after all. (But the birthday girl was just so darned cute, we had to let go of it in the end.)

And the trip to Toys Backward R Us was a blast in itself. We haven't been there in a gazillion years, and we laughed scornfully at all the Dora the Explorer paraphernalia, as I am told by the newly-minted Spanish expert in the house, that the Spanish used is grammatically incorrect and besides, no Spanish-speaking person would ever name their child Dora. So we felt quite smug and intellectually superior to the hordes of mouth-breathers we were rubbing elbows with. We then proceeded to knock a few notches off our maturity levels by turning on all the noisy toys and then escaping to the next aisle, where we giggled and high-fived each other. And we are the most pathetic high-fivers; we always sort of miss.
*~*~*
In an example of life imitating art (or more likely, life imitating pointless rambling), mere days after I ranted about the perfume-abusing woman at work, what should I see on the front page of the Calgary Herald (slow news day much?), but the story of a woman who was refused admittance onto a city transit bus because she was wearing too much perfume!

Did I call that one? I feel like a futurist or something. Buy shares in pet cemetaries, laser eye clinics, and water rights, that's all I'm going to say on this matter.

Posted by Barbara Bruederlin at 7:49 pm

Email ThisBlogThis!Share to TwitterShare to FacebookShare to Pinterest
Labels: I don't know what all the cool one-year olds are into these days, I see thirsty people with cataracts and purse dogs

The cool one year olds are into this

HAHHAHAHAHA! John Mutford - you win at life! It's even got the authentic bear. Brilliant.

Let me tell you, there's not more that's much more fun than buying noisy toys for other people's kids! Do it and enjoy it!

Your trip to Toys backward R Us, reminded me of one with me 3 siblings and my Mom... when we walked in the store, we saw the pyramid of Elmo dolls, and those were the one that when you touched their belly they would start to talk (screaming something like that tickles!). But then, if you would touch their belly again, they would start shaking (kinda vibrating)... guess what, right, when we left that part of the store a bunch of dolls were saying "that tickles" and a bunch of them were shaking, luckily, none of them felt on the floor! it was hilarious to see that whole pyramid sort of moving!

I don't know what I'm laughing at more, the Radiohead bear, or the idea you guys turning on all the noisy toys then fleeing. Ah, that is great. You guys rock!

Oooooh, that geetar looks like a lotta fun! I bought Devon a little tikes drum when he was 2, but it was really disapointing. It made more of a whup whup sound than a WHUMP WHUMP.

I could just imagine you having so much fun in the toy store, that I wanted to be there too! :O)

See, I couldn't fully enjoy that post because I was wincing the whole time, waiting for one or all of the Wiggles to suddenly pop up in video or mp3 form. I hate them. They should all burn.

Good for the bus driver who refused the woman a ride! I wish more drivers would stand up to their passengers, especially those with odour issues. Mind you, here in Edmonton, if they did, they're likely risking a stabbing...

I got a disturbing amount of satisfaction from it, Bubs. I am now fearful of what kind of grandmother I will end up being.

Evelyne, I'm going to have that image of a huge pyramid of vibrating Elmos screaming "that tickles", in my head all day. So if I start snickering inappropriately at work, it's your fault.

If you had been with us, Al, you likely would have been laughing mostly at our lame attempts at high-five. We really should not be let out in public.
But how about those Radiohead lullabies, eh? I wanna hear that! And I love how the bear still looks menacing.

It was a blast, Mel, even though we could not locate a single hedgehog - there is a dearth of hedgehogs in the North American toy industry.
We actually considered a drum first, but found the same thing as you, not even WHUMP! And the guitar makes lots of different noises - woohoo!

You know, I've never actually experienced a Wiggles, Beckeye. I guess I should be thankful for small miracles. Gotta love the Radiohead bear though - now THAT'S a child's toy.

I just noticed in today's paper that the story is continuing, Karen. And with the work to rule campaign that Calgary transit is currently on, this could turn stinky(er).

Ahh, my little nephew NEEDS that guitar! Thank you for the idea!

Hey sorry I missed you at the party!! I got there late and you had left! Bummer! The birthday girl sure looked amazing hey! What a princess! And Ben...well, he is just the birthday party champion! He really seems to enjoy those parties! I always threaten to by the most noisy toys...they really deserve it! hehe Well, maybe not Liz but certainly Todd! hehe Hopefully we can gather the clan together soon ... the female portion anyway and have a great night out or something!!!!!

Good for you- introducing an instrument. Never too early.

When I was growing up many people believed it was too early to start a child on an instrument at 3 and 4 years old. My Aunt recommended I not start until third grade altough I wanted to learn sooner. Too bad for me is all I can say. Now they know that is sooo wrong.

I've only done that once-- to relatives who allowed their complete inability and/or unwillingness to discipline their child to ruin a family gathering that was the first time most of them had seen my then-newborn son. We narrowed it down to a drum or fingerpaints. Since his mother was a neat freak, we got the fingerpaints.

I've been one of those people since I became an uncle. I warned my brother his whole life I'd have my revenge.

I'm now looking for a kiddie amplifier for the guitar, Justrun. If I find one, I'll let you know.

I am feeling the need for another Martha get-together, Bev, especially since I missed both you and Sandra at the birthday party. Your kiddo, though, I swear she was the tallest person there - what are you feeding your kids?
Eliz's pair are too cute for words.

And you are so musical, Leazwell! That's really a shame. You certainly more than made up for lost time though, didn't you?
I agree that you have to indulge your children's passions, regardless of age. Some them may not take, but you never know.

I love revenge gifts, Johnny Yen! Possibly the most satisfying thing one can do. I hope the kid got to use those paints, but I have my doubts.

And revenge truly is a dish that is best served cold, Just A. (Damn,I forgot that was one of my favourite quotations, I should have used that in my ABC!)
I hope you have been able to exact your revenge many times over.

The MOST interesting thing in the story about the PERFUME lady was in the expanded version. Don't know if you saw this but on Global they went on to talk about the "perfume free work zones" in the city. The U of C is one of them, correct me if I'm wrong (entirely possible!) but don't you work there? If my addled brain is on track then both your lovely perfume lady at work and your environment could soon be fume free!
Blondie
Can't remember my password at the moment hence the anonymous! Told you my brain was addled!

I do indeed work at UC, and it could very well be perfume-free, but I really don't know if they could ever really implement that, especially at the Health Sciences Campus, where each lab is run like its own little nation. There seems to be a wide gulf between policies for actual University employees and the rest of us who are essentually contract employees.
I'll sure keep an eye on that story, though, and it seems to have captured a lot of people's attention.

One of my favourite moments of the week is when you said:

And we are the most pathetic high-fivers; we always sort of miss.

Oh man, that guitar looks rad. And walking through the Toys R Us is mad fun. I never actually cared much for it as a kid, but now its like a field trip to a museum or something. Provokes all kinds of questions like, "which of this stuff will I buy for my kid and which will lead to a lecture on the hollowness of our capitalist society?"

I'm so glad I could entertain you with my admissions of lameness, Dale. Sadly, I wasn't making that up.

Toys Backward R Us as a touchstone of modern society and ethics. Why not? You may not learn much about Egyptian culture from a trip there, Will, but you can certainly learn a lot about ours.