She fought in a war

It wasn't very long
before I would stand
with another boy in front of me
and a corpse that just fell into me,
with the bullets flying round
- I Fought in a War
- Belle and Sebastian
.
Poor Eva took a basketball to the face in gym today and now her glasses are all cockeyed (pun only partially intended), including having one of the nosepieces breaking off and imbedding itself into her nose. And Eva was only the first of many of the fallen this fateful day.
.

The gym teacher, the nice one with the lady abs, declared that she has never seen so many injuries in one gym class in her entire life. Mind you, she is teaching IB gym. Gym class with the gifties is never going to be a very athletic endeavour.
.
Naturally the warranty on the glasses expired in December.
.
On Friday the gym class is having a Janet Reno dance party (and social dance evaluation). No more basketball for the gifties. Now they just have to try to refrain from creating weapons of mass destruction out of their dance partners as they steer them around the gym. I love IB kids; they're even more fun than manga geeks.
*~*~*~ 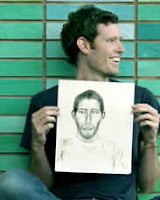 Our boy Chad VanGaalen was supposed to perform at SXSW this year, but didn't make it there. Instead he sent a video of himself explaining that he was refused entry into the US because he called the border official a "douche hat".
Talented muscian, artist, videographer, and now also world class creative cusser. Gotta love those arty types.
Posted by Barbara Bruederlin at 7:30 pm

Email ThisBlogThis!Share to TwitterShare to FacebookShare to Pinterest
Labels: sweating with the gifties, talking to people who are holding your passport

Ah, a basketball to the face, ouch. Those things should be outlawed. I'm trying to imagine the nosepiece of my glasses imbedded in my nose. Hope Eva doesn't have much bruising.

Janet Reno dance party! That clip was hilarious, as frightening the similarities were. Thankfully it cut out before we got to see Reno herself dance ;)

I heard about Chad being refused entry into the US, I thought it was quite funny actually. There was another band/artist banned for 5 years from the US...I heard it on Radio 3...or maybe I'm thinking of Chad, I'll have to double check.

Haha! The "gym class with gifties" cracked me up! Been there!
Sorry she got clobbered, though. Been there, too.

I took a volleyball to the faces in high school and my nose has never been the same.
I have never even heard of Chad Van Douchehat.

First of all, your labels are awesome. Is that "Sweatin' With The Gifties" out on video yet?

I loved at the Chad story...not a great game plan but I can relate.

i think i actually laughed at the story. but i loved it too, therefore creating that jumbled thought. some days i wonder why i get out of bed at all.

Al - the nose was a little sore today but no longer puffy. Thankfully she inherited my hard nose instead of her father's glass one.
I was actually a little dissapointed we didn't see any actual Janet Reno dancing. Hopefully the gifties will be able to bust some good moves, though.
I just read in the paper, it was You Say Party We Say Die who were banned entry for 5 years, for not having the proper work visas. I wonder how long the penalty is for calling someone a douche hat?

A lot of gifties took a beating in gym that day, Justrun. They're not all that used to using their bodies as more than a carrier for their massive brains.

I wonder which are harder, Fearless - basketballs or volleyballs? I guess if your nose is smashed, it's really a moot point.
CVG is an awesome local musician/artist/child trapped in a man's body. Here's a post that will work as an introduction to him if you are interested (sorry I've forgotten how to link within comments):
http://badtemperedzombie.blogspot.com/2006/11/terraforming-mars-wont-be-easy.html

oh, poor eva. i got hit in the head with a basketball. i was a non glasses wearer then, but a week later i got a hockey stick in the eye and during the subsequent trip to the eye doctor, found out i needed glasses.

ouch, poor Eva! I think that basketballs are the worst, followed by soccer ones. you know in spring when kids want to play outside and it is still cold and there's still snow and a lot of sand from the winter, it hurts and hurts the glasses too!

I would like to see the video clip that he sent. I wonder if it is on youtube...

Well, at least Chad coined a solid punch line even if he was denied entry.

Ewwww, hockey stick to the eye! And only a week after the basketball meets face episode. And then glasses to top it all off - that was a bad week for you, 668.

Frozen soccer balls to the face sound no fun whatsoever, Evelyne, although the little bits of sand and pebbles that get imbedded in your face can be kind of interesting.

I'm with you on the gym class hatin', Mel!
Hey that's a good thought - I'm going to see if I can find that vid.

Except that he was missing SXSW, I'll bet he was chuffed to take punchline credits, Will.

Thank God for that, 668. I can't imagine the additional injuries otherwise.

Douche hat? Note to self to steal that one.

I've been using douche hat myself at every available opportunity lately, Phlegmmy. It's a keeper.