"pray that she remains proud and strange and so hopelessly hopeful"

- Exiles Among You - the Weakerthans

I was utterly chuffed by the outcome of Canada Reads today. Lullabies for LIttle Criminals by Heather O'Neill did indeed emerge victorious. I can't honestly say it was my favourite book of the five, as it was the only one I have read thus far, but I was immediately taken with it. It's a very powerful and beautiful book that is far too funny, given that the protagonist is the 13-year-old daughter of a heroin addict, a 13-year-old who herself dabbles in heroin use and prostitution. 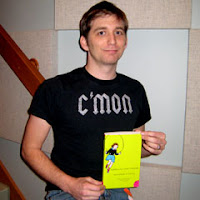 Like last year's winner, A Complicated Kindness by Miriam Toews, it was defended by Weakerthans' frontman John K Samson. John's track record of successfully defending books is a trifle startling given his laid-back demeanor, but I tell you if I ever get arrested for murder, I want him as my lawyer. I should get leniency for good grammer, at least.

In honour of today's developments, I cheated somewhat on my Friday random playlist today, in that I began with a random Weakerthans' song. It seemed prophetic that Exiles Among You should be the song that came up, as it could almost be a snapshot from Lullabies for Little Criminals.

Email ThisBlogThis!Share to TwitterShare to FacebookShare to Pinterest
Labels: books are my boyfriends, Friday random playlist, the Weakerthans as metaphors for life

I'm surprised by the winner. I wanted The Song of Kahunsha or Children of My Heart. Mind you I had not read Lullabies for Little Criminals and I might be willing to admit that it does sound rather intriguing. My picks were certainly not terribly unique in their central setting and plot. Next year I vow to read them all. Hm, seems like I have heard those words from me before.

I can't even keep up reading blogs no time for books or radio until Jian's show starts up then I will just have to make time...
I got a job, I started today... and our link is back on The Hour's site.
:-) it looks good there.

Toccata, you sound like me. "Next year I will read them all" is something I say every year.
I really enjoy the whole process, though, about talking about books, particularly Canadian literature. I believe that's the real agenda to Canada Reads, not picking one book per se. John Mutford makes a similar point much more succinctly than I do.

It's true Barbara W, we each of us only have a certain amount of free time. We all have different priorities, I guess.
How's your new job?
Pffftt!! the Hour link does NOT look good! They spelled it wrong. Sheesh.

You're right. That Weakerthans song does fit the book. Much better than the one I picked for my Canada Reads playlist. I should have asked your advice. Admitedly, I've only ever had a passing fancy with the Weakerthans. However, my respect for John K Samson has grown dramatically over these debates (unlike Jim Cuddy), and I plan on checking out their music a lot more.

"Transparent people that live on the other side/Living a life that is almost like suicide..." I love New Amsterdam.

I'm a huge John Prine fan. He's from the Chicago area. I've seen him a few times, including my 18th birthday, on May 11, 1979. Literally the first concert I saw as an adult. "Souvenirs," which he wrote with fellow Chicagoan Steve Goodman, is one of my favorites.

Oh wow, I love 'Fast Car' but have not listened to it in ages! Thanks for the reminder.

I also just had a discussion about Rocky Horror...lol. I still have not seen that picture. Probably shouldn't admit that too loudly. Oops.

Now I think I've switched and my libraby choice tomorrow will be Lullabies. It really sounds like something I could get into.

I always love your labels.

I love funny heroin addicted kids! I think I saw Amazon pushing the booking the other day so it must be all good! I've tried to read the Toews book a couple of times and would much rather just listen to my growing 'courtesy of Barbara' Weakerthans playlist.

The rest of your list is sweet too! Books and music, ahhh.

As soon as I finish The Painted Veil I shall be looking for the titles mentioned here.

I was a little stunned (some people would say that I am in that state far too often) when Exiles Among You came up randomly, John, as it is such a good fit to the book and I hadn't even considered it. A similar thing kept happening while I was reading A Complicated Kindness last year; I kept seeing Weakerthans' images throughout the book (ie lying naked in the rain etc).
I am always happy when someone cottons onto the Weakerthans. Gives me one more person to bore to tears with my fanism.

It's funny, Johnny Yen, I almost always have some Elvis Costello come up on the Friday list, but this is the first time it was New Amsterdam.
I love John Prine. I had the privilege to see him in concert for the first time last fall. He is truly a legend and in my opinion has been criminally unrecognized by the mainstream. Chicago should be proud to lay claim to him.

Allison, if you ever get a chance to see RHPS at a midnight showing, complete with audience participation, that is how I would recommend you see it. It's the experience that makes the film, frankly.
Yeah, Tracy Chapman, there's a voice from the past that I don't mind hearing.

I hope you can find the book, Deb. I have a feeling that a few people will be wanting to read it. It's highly readable, so I think you'll enjoy.
You know what? When they first put the labels feature on Blogger, I thought, oh yet another chore, but I love doing them! Labels are totally fun.
And feel free to discuss away, my dear. Hey, does David Usher still have really pretty hair?

You didn't like A Complicated Kindness, Dale? I really was taken with it. It just rang so true for me. I'm from Winnipeg and I know that town that Nomie grew up in (or towns very like that). There exists that mentality of piousness and meekness and, at the same time, viciousness against anyone that goes outside the norm. It's a small closed culture that is simultaneously fascinating and terrifying.
And if it helps spread the Weakerthans love, so much the better.

Where have I heard that title The Painted Veil before, Leazwell? Have you mentioned it on your blog?

And is anybody else finding that it is taking them forever to read a book anymore? Except for you John Mutford, you're a reading machine.

If only reading didn't put me to sleep now. I just got Leonard Cohen's "Beautiful Losers". It is currently sitting by my computer just waiting to be read.

I have two tickets to see Feist at the Orpheum in May. Very excited. It is guaranteed to be a lovely evening!

That sounds like some protagonist. About time our heros are drugged up prostitutes. This comment brought to you by Hollywood

That's my problem too, Serah, I generally only have time to read in bed. Sometimes I manage a whole page before I'm sawing logs.
Feist is coming here as well, but I'm not planning to go. I saw her at the folk fest last summer and while I like her, I don't know if I like her a whole concert's worth.

I want to read this book now! Thanks for the MP3 Barb!

It's a fine book, Mel - I recommend it highly.

Hope you enjoy my homeboys, the Weakerthans.

We are indeed proud to claim him!