Mondays are made for cute-as-hell creatures 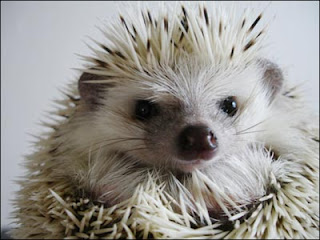 Is there anything cuter than a hedgehog? Seriously.


I wish we had hedgehogs in Canada. We probably have some kicking around somewhere, but it's not like in Europe where they seem to be under every toadstool. Or are those toads I'm thinking of? Hedgehogs would be under hedgerows, I guess.

growing up, my Oma and Opa used to send each of us kids a book from Germany each Christmas. As I was the youngest I always got the cutest books. I could never really read them all that well, but it didn't matter because no matter what the subject matter, I knew I could always count on them being good for a hedgehog or two.

Hey, do you know how to say "hedgehog" in Estonian"? "Siil"
How about in Japanese? "Hari-Nezumi"

Go here and you too can be a cunning linguist, at least in hedgehogese.

And this guy may not be a hedgehog, but I challenge you not to be singing along all day.

Posted by Barbara Bruederlin at 8:00 pm

Email ThisBlogThis!Share to TwitterShare to FacebookShare to Pinterest
Labels: if I were that cute I would be a billionaire

WEIRD ALERT: I'm not even joking, I was listening to that Franz song when I flipped over, and I haven't listened to them in a long while. Strange, and strange!

We have hedgehogs here, don't we? Well at least I've had friends who have had them as pets, and I agree they are darn cute. You may be quite right though, as I don't think I've ever seen one in the wild or anything, just one of the wonderful things I have to look forward to moving across the pond! Woot :)

we have hedgehogs, just that ours ar made of chocolate and are melt in your mouth good

Whoa ho! That is freaky, Al. And I can vouch for the truthiness of what you said because I was just over at your place and there was that very Franz song.

I think all the hedgehogs around these parts are imported. But when you go traipsing through the hedgerows in Britain, I am certain you will befriend many a hedgehog.

Oh yeah those ones may not be as cute, Kelly, but it matter not once they are in your mouth.

And I've seen a few guys with hedgehog frost-tipped hair.

For some reason the words 'imported hedgehogs' have sent me into a fit of laughter, topped almost with 'hedgehog frost-tipped hair'...quote of the week I think, with permission of course.

kelly beat me to it...was going to say the chocolate ones are especially cute to me.

I could see that guy in a band with Weird Al and Bubbles.

Aw, that critter is so darn cute. Oh, I just read kelly's comment. Good thing Purdy's isn't open at this time of night I would have to make a chocolate run.

The song just made me want to embed the stapler in jello.

I have never seen a hedgehog "in person". It is quite cute. Hey, since you are talking about hedgerows, can you please explain the following Led Zepplin lyric for me:
If there's a bustle in your hedgerow
Don't be alarmed now
It's just a spring clean for the May Queen...

WTF does that mean??? I have always thought that most of Stairway to Heaven was just random words that fit a certain amount of syllables for each line, and no one can explain the lyrics so I am pretty sure my theory is correct.

my favourite at Purdy's....the sweet georgia browns....damn i wish I had 2 of those right now..at christmas i bought 3 boxes....just to give away, i never had a plan who to give them too....well..i ended up eating 2 and giving one box away

I've never really looked at a hedgehog, other than the chocolate ones and then usually just until it gets popped into my mouth. Adorable but I don't know if I could have one, it would remind me of a rat...a spikey rat.

My purdy's favourite is the peanut butter daisy's. Great Kelly...look what you've started!

LOL!!! I'm delighting in the anticipation of torturing some of my pals with that tune.

Kelly - yes but you mentioned chocolate...

They are mean bitey little kickables.

YES! I would be totally stoked and honoured to make quote of the week Al! hehehe I'm a big shot!

And I think perhaps Naardwuar would be in that band as well, Deb.

You've been watching The Office too much, Toccata. Actually, no, there is no such thing as watching that show too much. Jim and Pam raise the bar on prankiness to formerly unheard of heights.

Fearless, I am 99.95% certain that your theory is correct. I have never been able to make sense of the Stairway to Heaven lyrics, and believe me, they used to play it at ever god damned social event I ever attended - never figured it out. Course I stopped listening after about the 897,875,776th time I heard it.

Kelly, you little piggie. That's the danger of buying undesignated boxes of chocolates.

Yes, it's safe for you pagans to come back in the water now Karen; Radiohead week is done. Some rats I have met have been really sweet. Just because you live in Alberta...

Kelly, Karen, you two stop fighting or I'm going to have to stop the car and do some random slapping! Except now I think I might be missing something by never having tried Purdy's. Always been a Callebaut affectionado myself.

What do you mean "torture" , Leazwell? Don't you think that dude totally rocks the stapler? And he's so handsome too.

For fearless, I think those lyrics are just a way of saying Spring is coming. The May Queen is the goddess of Spring, and if she's "bustling" around in the bushes, I guess she's just getting everything ready for the next season. That's what I'm guessing. But Zeppelin doesn't need to make sense because they rock.

And back on topic, that hedgehog is adorable. :)

Am I the only one who's never heard of a chocolate hedgehog?

Anonymous said...
This comment has been removed by a blog administrator.
3:48 pm

My husband pointed out the line is by Milton from the movie Office Space. It sounded familiar but I couldn't place it and yes the composition is irresistible

I think my knowledge of hedge-hogs is limited to those stone ones with the brushes on top you scrub your feet with. That and the hazelnut chocolates.

There really should be more, they're so cute!

awww! my friend Mellisa had a pet hedgehog, it was sooo sweet! when it got scared, it would curl up into a perfect little ball!!!

That is a reasonable theory, Beckeye. That damned May Queen, snooping around in people's hedgerows - what a lot of nerve she's got.

Yes, John. And you have not lived till you have eaten a hedgehog. Of the chocolate variety.

Your husband is correct, Leazwell. I haven't seen the movie Office Space myself, but now i really really want to. That guy is amazing.

Something for everyone, Karen! But you may have to step into the back room here.

Oh yeah, Hilary, the shoe-scraper breed of hedgehog! They are particulary well suited to our climate.

Awwww, Mel, now I want a hedgehog, just so I can scare it and watch it curl up. JK!

A warm and breathing koosh, Mel. What could be better?

Okay first the cunning linguist, now I hear a preview for tonight's The Hour saying they're talking to "the Hedgehog" i.e., Ron Jeremy. Did you know that was his nickname? And is all your blog written in pornocode or what?

Ron Jeremy is sexy in a puking, grotesque sort of way, don't you think? (And I do not want to know how he got the nickname)

While it is extremely predictable and girly of me (two things which I am not often) I just have to say re: the hedgehogs "Aaaaaw!"

Hi Faith, welcome! It's hard not to be all girly and say awwww when faced with a creature such as a hedgehog.