Green beer is for chumps 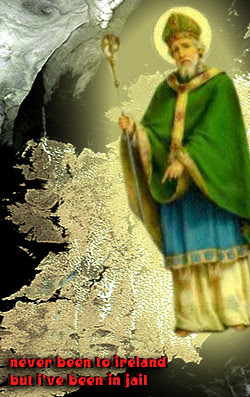 Regardless of how you feel about St. Patrick and the whole bringing Christianity to Ireland bidness, or conversely quaffing enormous quantities of green beer till you're stupid drunk and blaming it on the Irish, there is no ignoring the fact that it is St. Patrick's day.

So to honour the Irish, here are a few of my favourite things to come from the Emerald Isle:

The Pogues - and because St. Patrick's Day is a much bigger deal in America than it is in Ireland, here's a Pogues song about emigrating to America.
.
Thousands Are Sailing [mp3]
.
Roddy Doyle - he wrote The Committments, the Snapper, the Van, Paddy Clarke Ha Ha Ha, and the fabulous two-parter A Star Called Henry and Oh, Play That Thing, among others.
Kilkenny beer - we weren't able to get any today, so we enjoyed a couple of Guinnesses instead. Two eggs and a baby in every bottle.
Breakfast on Pluto - written by that other Irish bard who isn't Brendan Behan, Patrick McCabe, it was made into a fabulous film by Neil (Crying Game) Jordan. In the film, Cillian Murphy is gorgeous as the heartbreakingly sweet transvestite, Kitten. Murphy also stars in one of my favourite zombie films of all times, 28 Days Later.
Stiff Little Fingers - highly charged, extremely political and very angry punk band. Their music is still so strong to this day. Here they are performing Alternative Ulster in 1979:
Posted by Barbara Bruederlin at 4:04 pm

Email ThisBlogThis!Share to TwitterShare to FacebookShare to Pinterest
Labels: sorry we bastardized your holiday Irish people, Take a look where you're livin' you got the army on your street, U2 who?

I had no idea St. Patrick's Day was more poular in North America than Ireland. Interestin'.

In Newfoundland, Orangemen's Day was also popular when the protestant/catholic rivalry was stronger. Now St. Patrick's day dominates there as it does everywhere else.

This is what St. Patrick's day means to me...my Aunt's birthday. Gotta run, she just got in and I'm heading over for a minute.

I knew that only because my Irish relatives were all rather amazed when they came one year and we showed them what a real St. Patrick's celebration was all about. Green beer definitely played a key role in the festivities.

Someone actually had the audacity to try to pour green beer from their pitcher into my black and tan, they almost ended up with beer clothes. Someone else tried to pinch me for not wearing green, but I swore at here in a scottish brogue (my irish accent is crap) and she slunk away like a dog. Sorry I am a little teapot at the moment... too many B&T's.

"Thousands Are Sailing" is one of the most beautiful, sad and poignant songs ever, my favorite Pogues song and one of my favorite songs ever. I finally bought "If I Fall From Grace With God" on cd a few weeks ago.

St. Patrick's Day is on the list of many holidays that were minor in their original settings, but for various reasons became big in the United States, including Christmas and Channukah.

I stayed away from green beer, as I don't think I can trust anything that is that fluorescent, but I did come in contact with a leprachaun who offered me a shot from a plastic syringe. Did I take it? Of course.

Perhaps next year I shall travel over to Ireland and compare and contrast celebrations :)

I haven't heard that Pogues song in a long time, thanks and I remember my college roommate introducing me to Alternative Ulster and a lot of other great bands and tunes.

I've got Irish in my background and I let the day go by without any of the silliness. I'm not sure if that makes me silly or not.

I remember my friend's dad always making her march in the Orangeman's parade, John. I thought it was pretty weird and it humiliated her enormously.

Now that's a real cause for celebration, Deb. Have fun!

I'll bet they were amazed, Toccata. Probably somewhat horrified by the green beer as well, or is that just me?

Hey, formerly drunk Fearless (presumably a little hungover Fearless now), good job defending the honour of your beverage and your person, even if they did have to tip you over and pour you out.

Christmas and Channukah, I never considered them, but you are right, Johnny Yen, likely way bigger in America than they ever were at home.
If I Should Fall From Grace with God is such a great cd. I often listen to it in the car and howl lustily along, scaring the bejeebers out of the other drivers.

Always stay away from fluorescent foodstuffs, Allison, that is very wise. That includes that coleslaw that you used to get at KFC that looked like it came from Chernobyl.
What the heck was in the syringe?
You should make a run to Ireland next St Pat's. Smart money says you will find a big difference and no green beer.

Happy I could help transport you back to your carefree college days for a bit, while you were avoiding the silliness that the day brings, Dale. Does that mean you and I are the only ones not sporting hangovers this morning?

The Irish in Ireland also drink more Budweiser than any other beer!

I rarely have a hangover unless there's a really great reason. This day is only a moderately okay reason.

Hey, happy St Patrick's day to you too! For what it's worth, St Patrick's Day has gotten more popular in Ireland in the past few years too.

The Pogues are a wonder, aren't they? I was heartbroke to find out they were just in town recently and I knew nothing about it.

I forgot to drink beer of any colour yesterday.
I think they are going to take away my licence to be Irish.

I was doing a radio interview last night over the phone about the blog and The Hour and George... It will be heard all across Thunder bay on Rock94.
I'll try to post a copy if it's good, on the blog when it gets edited down to three minutes from a 30 minute conversation.
That's how I celebrated St Paddy's day. Oh and I watched the Habs Leafs game. That was Great!
My email address is still the same by the way Barbara B

What? I'm glad you told me you have no hangover, Just A, or I would have accued you of being still drunk. It's the Budweiserization of the world, I guess, but I will refrain from commenting on cultural pillaging.

I'm the same way, Dale. I think I got all my hangovers out of the way during university, which is probably why I was there for so many years.

Oh Bubs, my heart is breaking for you! Would it make you feel any batter if I said you probably wouldn't have been able to get tickets anyway? I didn't think so.

Are you actually Irish, Barbara W, or do you buy into the "everyone is Irish" thing?
It's amazing how much they cut down an interview isn't it? I remember when CBC came over to my place to interview me about blogging and we talked for an hour and a half, while the actual interview that aired on the radio was about 6 minutes.

Guinness has a licence to make Budweiser in Ireland, so I guess everywhere Guinness is sold in Ireland, Bud is too.

Yeah it seems like rather an oddball pairing, Bud & Guinness. I'm sure it wouldn't be there without the license to brew it.

apparently other countries have the license to make Guinness, eg. in Africa and the Caribbean.
They have modified it to suit local tastes, which I'm sure for hardcore Guinness fans is an abomination. For me it would be, it has taken enough effort to even appreciate Guinness in the form I know it.

Though I am suspicious that because my dad drinks 50, and gave me sips here and there, I was somewhat prepared for the taste of Guinness.