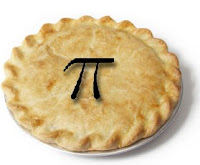 Happy Pi Day!
It's the only day of the year that math teachers get any respect.
I don't know any good pi stories but I do know a few good binary jokes (which is about as math nerdy as I get). Here's one of my favourites:
There are 10 kinds of people in the world, those who get binary and those who don't.
Whew that's a knee-slapper, isn't it?
I was considering actually making a pie for the family today. Although I rarely make them, I do make a damned fine pie crust, if I do say so myself.
And then I got a call from the doctor's office which made me decide against baking any kind of fruit-filled confection wrapped in flour and lard. Remember when I had to have an EKG last week as part of my annual physical exam? Well, my physician wants to "discuss" it with me. Fuck!
Of course I immediately started imagining that I was having chest pain and then I got all worried about going for a workout. I was alone in the house and if I had the big one it would be several hours till they found me, my cold dead fingers clutching my chest. But I was also afraid not to go for a workout. In the end I compromised with a whimpy and unsatisfying (but safe) bike ride.
Mind you last year, he found some anomaly with my bloodwork that he wanted to discuss, which got me all worked up and imagining diabetes, but after redoing the tests, it turned out to be a one-off and everything was fine. I'm sure it will be the same case with the EKG.
However tonight I learned that a friend of ours, who is actually a few years younger than me, had a heart attack a few days ago. He's okay, but had to have an artery stented as it is 85% occuded. Again, fuck!
Shoulda baked that pie.
Posted by Barbara Bruederlin at 7:13 pm

Email ThisBlogThis!Share to TwitterShare to FacebookShare to Pinterest
Labels: lame pi and binary jokes, waiting to be called home to my maker

Happy Pi Day Barb! I sure hope the Dr sets your mind at ease soon. When can you get in to see him? xoxo

Yeah,I'm sure it's nothing, Mel. I actually have an appointment this Friday so I don't even have to make myself crazy for too many days beforehand.

"Waiting to be called home to my maker" You win at life (again).

I hope everything turns out fine with the test results Barb. I'm sure everything will be okay, but I shall be thinking about you!! Do let us know how everything goes. Oh and FYI, evil geniuses aren't allowed to get sick or anything of the sort. Its the law.

I had a hankering for pumpkin pie today. I compromised with making chocolate macaroons instead. Satisfying, yet a hell of a lot messier.

Pi day!
That should've given me some luck on my math unit final. Although it was rational expressions or something like that and I didn't get to use pi.

My math teacher said they had contests in university to see who could memorize the most digits of pi.
No comment on that one. =)

Aww shucks, Al, you know I can't resist anyone who calls me an evil genius, as that is one label I would be proud to earn.
I'll keep you posted on the ticker,
but I'm sure everything will be peachy. Fear not.
Macaroons you say? I'd actually take those over pumpkin pie.

Hilary, sometimes it doesn't hurt to write down a few digits of pi on any final, just in case. As for memorizing, I'd likely be held to 10 digits, not even in the running in that contest.

I hve considered purchasing a tshirt with that joke on it because it is HI-larious!
anway,
I inadvertently had pie today without being aware that it is pi day
excellent!

You should have baked the pie, then if you had the big one at least everyone would know you are an evil pie baking genius. Have you ever seen the movie PI?? I recommend it if you haven't. I hope your doctor tells you you need more flakey crusts in your diet.

Of late I am imagining all those things...diabetes, hypertension, heart problems, strok and insanity!!!

Happy Pi Day to you too Barb! I had three weird blips on my last EKG as well but my doctor doesn't seem to be worried. Having said that, I have to see a specialist about my BP next week and there's a possibility I might have clogged renal arteries... great. Hopefully it's nothing major - keep us updated.

Barb...don't you hate those calls to "discuss" results? I'm sure things will be o.k. (I just went through the "oh my God, I have cancer" ordeal)....but the waiting does nothing for the stress/blood pressure.

They had a delicious looking piece of homemade blueberry pie for Mom's dessert the other day...wish I was a pie maker (I'm just not).

I agree with Allison...your label is a classic.

Forget the pi, I think it's you that should get baked. Damn doctors. No one else in the world gets away with saying "I have something to tell you" and then making you wait a few days. I hope everything is alright.

Oh, gosh, I am a hypochonriac. I read those household medical books every time I had a pain. When I lived at home my father threatened to throw them away but I wouldn't let him.

I don't look at 'em so much now - I know all the symptoms!

Regarding your consultation, I always take the Popeye approach - it is what it is and they'll do what they can do. Hopefully it will be just preventative care chat.

Happy Pi day. Does phi have a day also? It should at least get a minute of recognition or something. Think I'll do that tomorrow. Possibly while eating a pineapple.

I think I may even have heard that joke from you in the first place, come to think of it, Stephanie. Damn you know some good jokes! What kind of pi did you have?

I just checked it our on imdb, Fearless. Damn, that looks like my kinda film! I'm going to look for that one, thanks.
Had I succumbed to the big one, I would have wanted "evil pie-baking genius" on my tombstone.

hoho, you've got all the ailments covered, Jas. You've got me beat!

Hearing about your blips being of not much concern to your physician is actually comforting, Karen. But I sure hope that you can finally get to the bottom of your health woes very soon. You must be so sick of all this. But an occluded renal artery does not sound like very much fun. Please keep us updated, and I'm hoping things go well for you.

It was weird, Deb, because I got called in last year to discuss bloodwork (first time anything like that ever happened), so I was cogniscent of that possibility, and a week after my tests I congratulated myself on dodging a bullet. And then I got the call and swore loudly.
I haven't had the "OMG I have cancer" ordeal. That would be too awful.

Yeah I never thought about that, Just A, that is mean getting one all freaked out and then making them wait. That does it, I'm getting loaded tonight!

I love your pragmatic attitude, Leazwell! I will indeed deal with whatever it is; we always do, don't we?
You would be a very handy reference to have around with your vast medical knowledge. That could possibly come in very handy in Trivial Pursuit.

Perhaps you should be eating a pineapple in the Phillipines, John. Actually that sounds like a hell of a good plan. Count me in.

Bake 2 pies for the doctor and decide which to give him after he gives you the news. Happy thoughts. I've had them leave messages like 'call the doctor as soon as possible' only to have them basically say 'oh, it's nothing, he just wants you to come in so he can bill again'.

Some of those dr office people have asolutely no sense of humanity, Dale. I think they are all sociopaths.

Happy Pi day. I don't get the jokes but *sigh* I am not nerdy enough *hands head* (that is a compliment - and now I'll have that Weird Al song in my head the rest of the day:)

Yikes! re the worries about your heart I am glad you are Okay.

Btw, I LOVE that you posted your hate mail on your blog for everyone to see! Takes all the hate out of it and silliness
/whackiness insues as all that visit your blog get to mock them. Halarious.

hahaha glad you enjoy the hate mail, Faith! I was just so astounded by it that I felt I had to share it, but you are right, it does take all the punch right out of it when everybody can laugh at what a flake the writer is.