"We recognize that we need to do more on the environment" - Prime Minister Stephen Harper
. 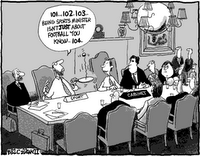 Stephen Harper has finally come to the realization that his government has underestimated the importance of the environment to Canadians. So in today's not-unexpected cabinet shuffle, he removed Rona Ambrose as environment minister. John Baird, a more experienced cabinet minister, is her replacement.
Ambrose has been deservedly maligned for her cavalier attitude toward the Kyota accord and for her lack of performance in implementing the new government's clean air act. She may have been inexperienced in the environment portfolio, but that does not excuse her ridiculing attempts to slow climate change.
South Calgary's (the riding in which the Zombies live) very own Jason Kenney has been appointed secretary of state for multiculturalism and Canadian identity. You all remember Jason Kenney? He's the intellectual ninja who stated during the same sex marriage debates that gay people should be allowed to legally marry, but only to heterosexuals.
Bring on the clowns.
Posted by Barbara Bruederlin at 1:41 pm

Yeah I hope they find some way to save the Polar Bears. Sad to see they are already disappearing.

I pleasantly surprised to read that Ambrose had been replaced. I'm not holding my breath though with this party. Tap dancing penguins have more class.

So the new secretary of state for multiculturalism and Canadian identity believes gay people should be allowed to marry legally, but only to hetrosexuals? Excellent, what ever shall be next?

Legally marry hetros? FFS! What a sad sad world we live in. I am so GLAD that Rona has been replaced tho. How bloody depressing

I'm having trouble hitting the right keys as I am laughing far too hard. I'm just glad the current wacko in question is not from here. BC seems to have more than their fair share of political nitwits!

It's heartbreaking, Ocean, particularly the thought of them drowning because the spaces between the ice flows has increased so drastically.

Harper had no choice but to replace her, Allison, after she alienated people so badly. He really doesn't deserve a lot of credit for doing the obvious. (Tap dancing penguins are actually the epitome of class)
Never a dull moment when Jason Kenney is at the helm!

What WAS he thinking, Mel? He's an idiot.
And let's see what this new environment minister does.

BC politicians are the BEST when it comes to wackiness, Toccata. Remember Bill Vanderzam? He was a card.

I'm certainly no PC fan and am more than glad to see Rona gone from the post of Minister of Environment. She had no environmental experience prior to the appointment - what the hell was Harper thinking? Oh wait, she looks good on TV. That's just what we need. Hopefully this new minister will get off his ass and finally start stepping up to the plate (how do you like that for a tie in to your cartoon?). He certainly couldn't do much worse than she did, could he?

Ugh is all I can muster. Silly gits.

Yeah, its all about winning votes, at just the right time, sadly. Think there will be a non confidence vote this year?

Karen, you are right. Ambrose certainly has beautiful hair and I think Harper wanted to showcase that he has (attractive) women in his cabinet. Let's see what the new dude does.

Gits they are, Dale! And they are running the country. Oh, or were you referring to me? *wink*

Hmmm, good question, Allison. I'm not sure, is there a motion coming up that could be voted on? Well, regardless, there will be an election within the year.

Never you Barbara although I'm thinking of renaming your link Gilly Sits. Just because you are in your avatar. Sitting I mean. Would you mind changing your name to Gilly Bruederlin?

Never you Barbara although I'm thinking of renaming your link Gilly Sits. Just because you are in your avatar. Sitting I mean. Would you mind changing your name to Gilly Bruederlin?

Like any of it's gonna make any difference. Get them all the hell outta there I say.

"Gilly Bruederlin" - that has a certain cache to it, Dale. I'm calling the lawyer in the morning.

Can't happen fast enough for me, Maureen. I'd prefer anarchy.

I thought Dion said something along the lines that he wouldn't approve the gov'ts budget...but I could be wrong.

Oh of course, the budget is coming up, thanks Karen. Well that could be the vote that does it then. It's becoming a national pasttime, holding elections, isn't it?

They sure seem to scrape the bottom of the barrel when they assign some to these posts, don't they?? My mother in law and I often have the conversation, "who have they got running things?" and "we could do better ourselves".

You all remember Jason Kenney? He's the intellectual ninja who stated during the same sex marriage debates that gay people should be allowed to legally marry, but only to heterosexuals.

He did NOT really say that, did he?

If that had been a line in a stand-up comedy routine, it would have been absolutely brilliant.

I guess in a way it is. I think of the right wing governments here and abroad as some kind of bizarre dada comedy routine.

"gay people should be allowed to legally marry, but only to heterosexuals."

If what he means is heteros should only be able to marry gay people until the laws are changed.

I'm getting increasingly tired of the politcal crapshoot that these people keep keep subjecting our country to, Deb. You and your mom-in-law should be running things.

I was paraphrasingm Johnny Yen, but it was something very like that which he said. It's pretty amazing the hilarity that people can get away with in the political arena, isn't it?

That's not a bad plan, JACC. I would have no problems marrying a gay man, actually. I think it would be rather fun, for a variety of reasons which I will not go into at this juncture.

tell me he never actually said gay ppl should only be allowed to marry heteros? ---- tell me it is just a joke!?

I can't tell you his exact words, Jen, and this is just hearsay, but I have no problems believing he would state something like that. Scary eh?

Sadly Jason Kenney did say something just like that. He also said, "I will remain a virgin until I find the right woman to marry"

Hi Blondie, welcome! So my memory didn't fail me after all. After I while I figured I must have made that up.

That Kenney is one scary dude, isn't he?