I'm feeling very Cuff the Dukey today, so I am subjecting the world to a Cuff the Duke pic spam. Yay!
*
Complete with concert footage!
*

Just how adorable is Wayne Petti anyway, as he flails his little self around stage? Pretty darned adorable I would say. He may be small in stature but his cutiness is enormous.
*
Allison is going to see Cuff the Duke and Hylozoists doing a show together this month, which actually is pretty easy for them to pull off, as both bands share a member base.
*
And it's Jen's birthday today! She had a penis cake at work yesterday.
*
Here's some concert footage of Cuff the Duke playing at SAIT in Calgary this April. Where was I that day? Oh yeah, I had not

yet discovered the great Cuffers.
*
AutisticKevin shot the footage of this performance of Ballad of a Lonely Construction Worker, and, while the picture and the sound may not be MTV-quality (I suspect that is a good thing actually), it's pretty darned great. I felt like I was there in the audience, grooving on the sound.
* 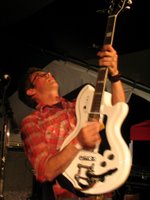 Check out the ending where everybody sings along and Wayne claps for the audience.
*
Awwwww! So QT!
*
Allison, look what you've got to look forward to:

Posted by Barbara Bruederlin at 2:26 pm

Interesting. Have they got two drummers like Adam & The Ants ? What's the song about Barbara, I couldn't quite make out the lyrics ?

I'm SO excited actually, its this Thursday :) And I never would have gotten tickets if I didn't read it here first.
I'll be sure to do some picture taking and such. My review won't be nearly as good as yours are, but I'll try my best. It might be better because I'm coming from a more objectionable standpoint.
The video you posted is one of my favourite songs, "Ballad of a Lonely Construction Worker" right?? See, look at me learning ;P

They do seem to have two drummers now, Ben. I imagine that makes for some pretty interesting dynamics within the band.
I don't actually own that song, Ballad of a Lonely Construction Worker - it's on an out of print cd that's really hard to find, so I don't know the lyrics myself, although it is mostly instrumental.

I'll be thinking of you hanging with Wayne and the guys, Allison. And looking forward to any photos that may happen. Mine never turn out, but I imagine you are a much better photographer than I am (almost everybody is).
That was indeed Ballad of a Lonely Construction Worker - well done! I've been looking for that cd - Life Stories for Minimum Wage - everywhere but it's currently out of print. I hear rumours they may be doing another pressing sometime.
Have a great time at the concert!

Barbara you AMAZE me. I've never heard of half the bands/artists you mention and you are a wealth of information. Your new name - Barbapedia. I've apparently lived under a rock for the last decade or so...I'm glad I have all of you to bring me up to speed on all that's hip/cool/new/not so new.

I've heard of the Beatles...anyone know of them? Stones? Zeppelin? Hhmm...I'm so outdated.

hahaha Barbapedia! I love it,Deb - I'm going to start getting a swollen head.
I am blessed to live with a teenaged music nerd and to also be able to glean a pile of good info from people such as Ben and Will.
You can't deny the classics, though...

Barbapedia *G* awesome! Your musical knowledge astound me as well.

I hope you have fun Allison!

Awww shucks, Mel! *scuffs toe in dirt*
I am simultaneously really excited for Allison and jealous of her at the same time.

I love how I haven't been to a live show in like 8 months and the one I go to everyone else seems to want to attend :) I wish ya'll could come too.
Now the pressure is on to take some good pics!

She is a lucky little waif, Will, EXCEPT that apparently the Constantines are playing in the same town on the same night. Now how cruel is that?

Wouldn't that be fun if we could all come with you, Allison? But we wouldn't be all obnoxious and talk loudly during the quiet songs, because we are music lovers, we'd just need to go for drinks afterward to debrief.

Looks like they put on a great live show - jealous of Allison!

Haha, yes we totally all would probably need a debriefing. But it would be fun. If we all do make it to see The Hour in the new year, we should try to make it to see a local band.

As am I, Kees, as I have never seen them live, but I will remedy that the first chance I get.

That's a splendid idea, Allison! Surely there will be a band or two playing somewhere in TO. I'm in!

I love hearing about your musical adventures. I would have more to comment on if I could shake off this foul mood I am in!

Awww Serah, sorry to hear about your pissy day. I'll try to find something to cheer you up. I'm getting a hella sore throat, so I need something feel good as well