What a difference a day makes

For three incredible hours, Eva was enrolled in full IB.

And she just about crapped her pants, because the first thing she noticed when she went to pick up her schedule from her new high school was that she was enrolled in IB Math. And she was less than stellar in math last year. And then to her horror, she noticed that all her courses were IB, not just the English, Social Studies, and Visual Arts that she had been accepted to. They even gave her IB Phys Ed! And if you know Eva, you know that's just wrong wrong wrong! 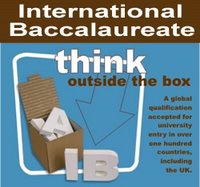 IB, by the way, stands for International Baccalaureate, which is a world-wide program of advanced high school courses. At graduation from high school, the student should have credit for several university courses.

Now English, Social Studies, and Visual Arts I can certainly see Eva accelerating in, but Math? Science? not going to happen, my friend.

But after driving back and forth from the school 175 times very very slowly because 14th Street was closed down because somebody had plowed into the overpass and it was crumbling, so everybody took Elbow Drive instead, in addition to initially forgetting our fees forms and cheques at home which we didn't notice till we got to the school, and it was raining so we got wet when we ditched the car a few blocks from the school because traffic wasn't moving and we were late for the appointment we had to make with the guidance office that afternoon to get the schedule fixed and besides Eva was already late because the doctor kept us waiting for her doctor's appointment... where was I going with this?... oh yeah, everything worked out okay.

So yesterday, we treated ourselves very nicely and listened to the final edition of Sounds Like Canada in the summer, where the daily correspondents (or as Sabrina Jalees, the Monday youthish correspondant called them - correspondencers) received their Jianee awards, and then headed to the mall to pick up our tickets for the New Pornographers /Novillero and the Frank Black concerts, plus a new NME, and we listened to Neutral Milk Hotel in the car where we howled along with Jeff Mangum at the top of our lungs.

Feel free to howl along to Two-Headed Boy, if you feel like it. Nobody is listening.

(apologies for the stream of consciousness post; that's just what it is like inside my head some days)

Upload music at Bolt.
Posted by Barbara Bruederlin at 3:24 pm

I enjoyed the stream of consciousness post, and just favourited that track, thanks.
Why can't my mailbox look like that? :)

I had only heard "In The Aeroplan Over The Sea" by NMH before. While I still like that tune, Two Headed Boy is definitely more inviting for a sing/howl along. Thanks!

I hope Eva enjoys all her courses and thanks you for all the trouble you went through to fix her schedule.I know some parents that never bothered.
Lucky you to be going to all those concerts.
I am bummed that I missed the last Sounds Like Canada but if they have a link to listen to it thats great.
re:the song
I understand the howl along reference.

I wish my school had had those kinds of options. I wasn't good at math either, or PE! I did have 3 different English classes when I was in grade 12 which I LOVED!

IB courses? Wow that sounds very neat! Where were these sorts of things when I was in school...oh yeah, I remember, I grew up in the middle of nowhere...If Eva's having problems in math and science, there are always tutors. Or perhaps they have help sessions at the school? Funny but everythime I see "IB" I think irritable bowel not internatioanl baccalaureate.

I too caught the last edition of Jian's Sounds Like Summer. When he first took over for what's her name, I hated him but now that he's leaving, I'm going to miss him (mostly because I REALLY don't like the lady who normally does it). As for his Much Music songs of the day, he only had ONE song that I actually enjoyed the whole summer - Sam Cooke's A Change is Gonna Come. Oh yeah, and I really think that I don't like Sabrina at all. God she's annoying.

Thanks for making Two-headed Boy a favorite, Allison (Bolt told me to say that)- jk! It's a grand howl along song, isn't it? Doesn't your mailbox look exactly like that?

And King of Carrot Flowers and Holland 1945 (also on the In the Aeroplane Over the Sea cd) are even better howl-alongers, John! NMH was a pretty amazing pretty weird band, and it sure is hard to find anything from their catalogue.
Glad you enjoyed it.

I don't understand how one can't bother to fix their kid's schedule, Barbara W. That's part of the job as a parent. Mind you, she would not have been able to take full iB anyway, as you have to have 85% in a subject to qualify, and she didn't in math.
The concerts are definitely taking over my life this fall, although there are a couple of prime ones that I missed getting tickets for.
I hope you can still hear the Jianee awards - they were pretty funny. And Jian played your favourite band in the entire world as the must-have song of the day. Radiohead, you know what I'm saying!

We had zero options in school too, Sarah, mind you that was about 100 years ago. Three English classes in grade 12 - I'm drooling! I did extra credit work in grade 12 English, critiquing books that the teacher was thinking of using the following year, but that was my only keener course.

haha Irritable Bowel, I never thought of that, Karen - too funny! Eva's not really having trouble in math and science, just that her grades in those subjects are not high enough for IB qualification (which I think is 85%) and she doesn't have the interest to pursue those at an advanced level.
Me, I always liked Sheelagh Rogers - she reminds me of the days when Peter Gzowski was still hosting. Some of the must-have songs I really liked, others not so much. I wholeheartedly agreed with the final Radiohead choice as I think it is just magnificent, but then in my books Radiohead can do no wrong.
Sabrina was pretty annoying but she also had some pretty good zingers. I loved Chris Murphy.

I favorited that song too. I LOVE LOVE LOVE it! Thanks for posting! I have an appointment for wednesday to register Devon for Distance Ed courses. This way he will be able to go back and forth from here to my sister's place in Cranbrook without missing school :) I'm not looking forward to the registration appointment though. I finally got a job assignement through VCH for three weeks as a file clerk for a project they are doing. So I have to ask for the morning off that day :( Can you believe it? Our appointment is at 11am, so I hope to hell I can make it from Joyce skytrain, home to pick up dev, then bus to 41st and fraser for the appointment then back to work again by 1pm. *chewing my fingernails*

I'm going to include you in the quiz Barbara, so TAG you're it! If you want to play along, please go to my TAG post, and copy the questions for your post. I hope you play along :)

Isn't that always the way, Mel? The appointments are always at the most inopportune times. I'm getting all stressed out just reading your schedule, because that sort of thing makes me insane. I hate being late and not having control.
The Distance Ed sounds like a great plan though. I hope it works well.

Sure I'll do the tag quiz, Mel - those are fun.

Can't listen on ma and pa's 'puter but everyone seems to love it so I'll listen later. IB is great (irritable bowel not so much), we should have it over here IMHO.

Isn't it frustrating using someone else's computer, Kees? I go crazy when I have to borrow Jer's laptop and can't listen to anything either. How can people live that way?

Don't scare me too much about IB, I going into that too :P
I know up here, though, grade 10 you take "full IB", which is actually just the regular courses, but they get you with the other IB kids. Then grade 11 and 12 you can choose... I'm going into IB for English and Social/History. I'm not a big fan of Math and Science, either :)
Anyway, enough of my rambling, I really hope Eva loves her classes :)

It's quite similar here as well, Becky. Grade 10 is actually pre-IB, but you only take that in the courses in which you will be taking IB, you take pure in the rest.
It sounds like you and Eva have similar acaedmic interests. I hope you'll love your courses as well.

Honestly I'm stuck in a technological wilderness and it's driving me crazy. Grrrrrrrrr

Deeep breaths, Kees, deep breaths. Soon you will be out of the wilderness, back to civilization.

Well, I'm glad it all works out. Funny how that happens when things don't quite seem to be going right.

I generally find that things work out in the end, Will, but maybe that's just the annoying optimist in me.