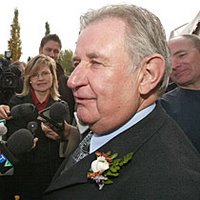 FINALLY!!!!!
Ralph Klein actually got around to announcing his retirement the other day, ending months of speculation as to whether he would actually ever resign or if we were doomed to his "leadership" until we are all rotting in our graves.
For those of you fortunate enough to have never heard of the man, he has been the premier of Alberta for 14 years. He has blown up hospitals, and closed schools, and he has wined and dined the oil and gas industry, and thrown coins at people in homeless shelters while drunk.
But he was strangely always a very popular premier. Maybe because he blamed the "eastern creeps and bums" for Calgary's rising crime rates back in 1982. Maybe because he sent every Albertan a cheque for $400.00 last winter. (Can you spell "vote buying"?) Maybe because every time he opens his mouth, you know something outrageous is going to come out.
I think that last one is the only reason that I will in fact, do I dare admit this, miss him just the tiniest little bit. He is a bully, he is a redneck, he is infuriating. But goddamnit, he's funny. 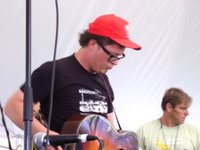 Lorrie Matheson, a Calgary musician, well-known for his anti-Klein views, wrote a song about him which was played on the local CBC home show yesterday. I think it was called something like "The King is Dead". I thought it was brilliant. In it, Lorrie mentions the getting drunk and harassing people at a homeless shelter incident, he tells Ralph that "that $400.00 didn't buy my vote" (nor mine, Lorrie!) and he reminds us that Klein has been cutting health care and education funding for years.

I couldn't find a copy of it anywhere, and I don't even own any Lorrie Matheson cds. I know! Shocking, isn't it? And I call myself a non-redneck Albertan! Bad Barbara! (I promise to fix that oversight, post-haste).

BUT, please do check out the website of Calgary's premier curmudgeon, until I can lay some Matheson tunes on you.

Perhaps not surprisingly, according to the CBC, the response from local listeners to this song was overwhelmingly negative. Hmmm, I guess I shouldn't be surprised.

This is Calgary, after all.

***
And where was my camera when I needed it?
I saw this sign on the back of a truck this morning:
Koharski Plumbing
the Polish Prince of Plugged Pipe's
- yes, you read that correctly - "pipes" was possessive.
I'm not even sure what Koharski Plumbing was trying to say there!
Posted by Barbara Bruederlin at 6:26 pm

Lynne Truss would have a field day with that Plugged Pipe's guy.

As for Klein, I guess the 22 Minutes people will have to retire as well.

"This is after all Calgary" - I smiled and nodded to that...which probably makes me a stereotypical 'Easterner' (to me the East in the Maritimes, hence the quotes).
Hopefully now more progressive change can take place?!? Who will Mercer tag now? Oh right, we've still got Harper.

I love Lynne Truss, John. Nothing like a militant grammerian!
Fortunately for 22 Minutes, there's always another nutjob waiting in the wings.

I'm hopeful, Allison, but not overly. The fact still remains that the Conservatives have been in power in Alberta since 1971. There's got to be a huge groundswell of change to make a real difference. Still maybe with Klein gone...

Ralph Klien makes me lol. A lot.
Some of the things that come out of his mouth. Even hearing him talking makes me laugh, he's got a kinda alchoholic Bilbo Baggins voice, very sexy. I saw a picture in the paper the other day of him, with a caption something to do with crystal meth and I seriously thought the paper was joking about him being on crystal meth. Okay, so it wasn't but Ralph Klien pictures always seem to be caught in the worst moment...

Phewwwf. Enough Ralph-bashing. He's only the one who made my school have no Kleenexes, and be the set for a movie about kids in the ghetto. I'm glad that we're in for a change, we've been waiting for that for a while. But is there anyone good to replace him? Oh wellz.

"he's got a kinda alchoholic Bilbo Baggins voice, very sexy"
Hilary, you are one sick puppy! It's true though, the man can't take a bad picture!

Eva says we should get Lorrie Matheson as the next premier. I doubt Lorrie would want the job, but at least he would have some compassion.

I hate it when that happens! Very similar thing happened to me a few months back when I saw a 'chimney and flue' van which ACTUALLY had the tag line "no erection too big or too small".

I saw painted on the walls near the video store the other day.

As a fellow Albertan, I did a small albeit joyful jig when uncle Ralphie formally handed in his resignation. In regards to Alberta's future, I fear that things will get worse not better with a change in the PC leadership - I DON'T like Ralph but those vying for his job just don't seem to cut the mustard. I think the only way things in Alberta will change will be with a change in government. Dare I say it...I'd even vote liberal (Ack!) if it meant ousting the PC's here. My dream? An NDP Alberta gov't or dare I say it...a GREEN Alberta? Yeah, definately dreaming. It'd never happen, this is Alberta after all.

And yes, Ralph, despite his politics, will be missed for his antics. Pies in the face, drunken coin tossing, and just about everything that comes out of his mouth was comedic gold. Ah Ralphie, I see a new career in your future!

The quality of the person has absolutely no bearing on where the oil is buried. It coulda been here just as easily (maybe I'm wrong, I'm not a geologist).

That is some good news ... now if I can just got my nemesis out of the White House.

"no erection too big or too small" oh lolz, Kees. I can certainly think of a few people who would take that chimney sweep to task on that statement.

That, Ben, is a fine example of constructive tagging - gets the message across and extracts revenge. Beautiful.

We seem to share a political dream for this province, Karen. I have voted both Green and NDP in the past, and frankly, with Elizabeth May now heading the Green Party, I think they are going to be a force in the future.
Stand-up Ralph - I'd watch that show!

I'm 100% with you on that, Neil. The Alberta government can't claim any great political skills were behind their wealth, just geography and a lot of dumb fucking luck. However, next time I need a vote, it's good to know that I can score at least one, providing I have $375.00.

i'm thankful for that

hmmm, eastern creeps and bums huh? i'll be a creep, thank you very much, haha - i have to admit i'll miss ralph a little, he was so funny and i didn't live in his province ;)

Get the hell out of Calgary then if you don't like this city. It's a real simple equation that doesn't require much thought if "this is Calgary after all". I wasn't a big fan of Klein either but don't shit where you eat. This is a great city and it would be even that much better if we stood up, flipped the finger to overbearing conservatives that try to dominate every aspect of our culture and condence it into a shot glass...

but at the same time fire back against the yes, Eastern paracitic creeps and bums who shit on us daily yet have no problems coming out here to take a job in this city. Calgary's got to stand on it's own to feet and it's a great place to live so maybe you should think about that before you shit talk her.

Hey D-MoN - those words you were having so much trouble with are actually spelled "condense" and "parasitic". Nice try, though.

Why do you guys hate Klein so much? All of Alberta loves him! He has not harmed Alberta or Canada in any way. In fact because he let the oil companies loose by abit, he opened up for money for the province, bringing it out of debt. And with that money Alberta pays over half the taxes for all of Canada a year, much more than Ontario or Quebec. Now we have 50 billion dollars!