"Don't worry, Bill - nobody is there to hear you sing anyway"
While that is not strictly true, there is some validity to those words uttered by Billy Bragg's wife. His on-stage chatter is as much a critical factor in Billy Bragg's concerts as are his songs. In fact there were times during the concert at the lovely Knox United Church when I thought I was at open mike night at the comedy club, or at a rally at the labour union hall. I don't think I have ever laughed so hard during a concert in my life. Okay I almost peed my pants during the Arrogant Worms' set at the folk festival last year, but that was just a short set; this was an entire evening.

And of course it didn't help that Geoff Berner was the stand-in opener either. He took to the stage with nothing but an accordian and a mischievous smirk. Eva commented "Uncle Hank should have stuck with the accordian - he could have been a big star". I don't think Uncle Hank quite has the sass or the humour to pull that off though. Berner's signature song is called "I'm a Lucky God Damned Jew". I think you can imagine the set on the basis of that information.

Rather than try to recite the set list of songs that Billy Bragg performed, I'd rather give you the set list to some of the stories he told: 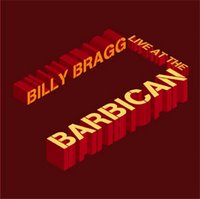 - watching animal videos on YouTube, particularly the one with Muffy the cat who plays with the cord from the rotating ceiling fan

- the other wonders of the internet, including blogging about the tour and reviewing the audience, "especially that lady with her feet on the chair"

- heckling Morrissey at South By Southwest with shouts of "take off your trousers, Morrissey!"

- and of course, in amongst all the humour (of which the above is but a small sampling), there was the politics, the passion, the rants. Which brings us back to the songs.

Here is There is Power in a Union.

Get music codes at Bolt.
Posted by Barbara Bruederlin at 3:12 pm

That sounds like a great concert! I love when artists tell stories, makes the concert music more personal. I enjoyed that track, it reminds me of Canadian East coast music...I'm not going to name the band...but I did enjoy this track.
Also, The Cons are playing Kingston the same night I have tickets to see Cuff the Duke, go figure eh?

For a change, artist banter was entertaining. I missed a few of my fav songs, though. And what about Geoff Berner? Man, does he do a good job while pissed.

I've written up some stuff ont eh cocnert at tblog.ca as well, if anyone's interested.

It was an amazing concert, Allison! Billy Bragg was the finest banterer I have ever encountered, bar none.
NO! The Cons are playing Kingston the same night as Cuff the Duke? Don't those guys talk to each other? What where they thinking (because I'm pretty sure they share a fan base). That is brutal, my dear.

Best banter I've ever heard,Teddy. I bought the double cd Live at the Barbican at the concert, and there's even banter on the cd. It's great! Geoff Berner was hilarious, pissed or not.
Coming over to check out your write-up.

It was memorable, Serah; I'll remember it fondly for a long long time.

A great night with Billy then ? I love the heckling story. Did he play alone or did he have a backing band ?

He had us rolling in the aisles with the Johnny Clash persona, John. The man is quite simply irrepressible.

There were a lot of Smiths/Morrissey bits during the evening, Ben, including telling how one particular polician (I forget whom) when asked his favourite song of all time, promptly answered "The Queen is Dead", which led to Bragg's observation "once a Smiths' fan always a Smiths' fan" *pause - the man has excellent comic timing* "and once a Tory always a fucking Tory".
He played alone.

Yay! Sounds like a great time! Eva is so lucky to have a mom who brings her to all these great events!

You're too kind, Mel. I actually think it is I who is lucky to have a daughter like Eva with whom to go to these events. She is where I get a large portion of my music information from anyway.

That concert sounded fabulous Barb, I'm glad you had such a fantastic time. I love when artists actually talk between sets and don't just jump from song to song being all impersonable and snotty, just makes it not worth the money spent. It's great when you get a little insight into their personality and not just "I wrote this on such and such a day and the sky happened to be blue and this is how it goes:".

I think he looks like Ryan Styles SP? of who's line is it anyway...
You are always seeing someone in cocert so different than the last person you saw in concert was.

Good work, very nice blog. Seems you enjoy working with/ on the internet. And
if something like that even pays off well, it would be even better, woulnd't it?

I chose you because you convinced meby all the effort you put into it. That
really convinced me.
For further information please look up my site www-franco.blogspot.com Please get more information
on....see the video!

Alana, look at you - you're back! Ditch that real life girl and come hang with us in virtuality again.
Yes, I appreciate the effort put into a fine banter. I completely understand that some people are more comfortable than others in yacking it up, but do try.

Ryan Styles haha Barbara W. I guess he does a bit.
Yeah,I like to experience a wide assortment of shows - you don't want to get stuck in a rut.

So what exactly do you sell, Franco?

Isn't he wonderful? Deadly serious about his ethics and politics and very, very funny and engaging to see. I have seen him 5 or 6 times and he is always that way. Glad you fit BB into your concert schedule! Viva Billy.

I was actually thinking about you at the concert, Jacquie, as I remembered what you wrote about the last BB concert you were at. I'm so glad I had the chance to see him - he's wonderful!

Johnny Clash!!! Brilliant! I would loved to have seen that!

and I still have yet to see him live. Will have to do that one of these days. I think good stage banter is pretty essential to being a good performer. Hopes the makes it for the Chilli Peppers.

He is a funny funny man, Kees! Much more so than I expected.

Thanks Will, it completely erased the Dome experience from my mind. I feel so much better now.