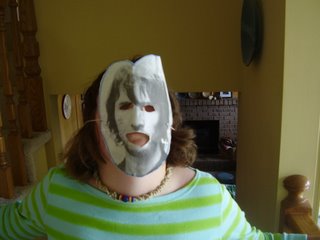 You Have Been Blunt Attacked
The official score on the mother-daughter James Blunt pranks is tied at 3 apiece, but Eva's final instigation in the ever-escalating war was such a mind-blower than I knew I couldn't top it and have declared her THE WINNER.

It began with me taping a full-page ad of the upcoming James Blunt concert to Eva's bedroom door, to greet her when she got home from a week at camp. She was so zonked that she took a shower (falling asleep in the bathroom) and then stumbled right past it to pass out on her bed for several hours. Inscrutably, I waited for her to notice, and was rewarded by her outraged reaction.

The next morning I found Mr Blunt taped to my bedroom door, with a heart drawn around his head and an arrow piercing the heart. When my shrieks subsided, I wrote "Christmas present for Eva - front row centre seat to the concert" on the ad and tucked it into her bed, with James' head on the pillow and the blankets pulled up to his chin.

After I got out of the shower, there was James' severed head, taped to my bathroom mirror, at exactly the level of my face so that I had to peer around him to put on my makeup. (Eva later admitted that she measured to make sure it was at the right height.)

I retaliated by writing a speech bubble coming out of his mouth, saying "You're beautiful, Eva. Will be you be my Canadian gf?" and taped it to the outside of the front door. Unfortunately we didn't have any visitors today to be greeted by this declaration of love, although it was up there for about 3 hours before Eva noticed. 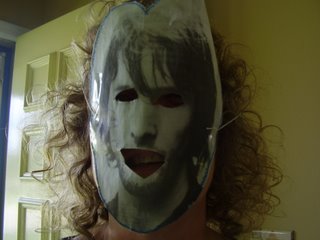 And then, finally, as I was preparing supper, I turned around as Eva came up the stairs from the family room, to be greeted by the sight of my daughter in a James Blunt face mask. It looked like something out of the Texas Chain Saw Massacre.

I came thisclose to tinkling in my pants, I kid you not. So we all tried on the James Blunt mask, posed for photos for posterity and declared a truce.

But there's always next time.


Posted by Barbara Bruederlin at 3:58 pm

OMG, that is the best. Man, tomorrow I will have to video my James Blunt impression, but man I don't think it will ever top that James Blunt mask. That just made my night :)

LMAO! You guys are so great, it must be so much fun around your house! Those are all increasingly scary pranks, seriously, I would have come close to peeing myself too.

I'm told that there are some subtle pranks hidden around the house still, Hilary, so the danger is not over quite yet, but I hope they are only minor ones.

Oh yes, Allison, PLEASE video your impression! I'm dying to see it. And I am prepared to be very frightened.

I had to call a truce just for my own safety, I think, Alana. Somebody would have ended up losing an eye or something!
I can sure tell Eva's home now...

Damn ... she saved it for the big finale. That was an awesome contest from the sound and look of things. I'll have to come up with a similar contest for the N&UR household.

HAHA! That is so frickin awesome! You and Eva are the best. That just blew whatever residue of bad mood I had right out of the water whoohooo! The pics are great.

It just sort of happened organically, Will, but there is a lot to be said for planned attacks as well. I'll bet the N&UR household can get pretty inventive in its sneak attacks.

So glad my losing at James Blunt cheered you up, Mel! I was happy to admit defeat to such a worthy adversary.

mwahaha Will - that would be great! Can't you just imagine it? And strangely, it makes me feel like watching Shaun of the Dead again.

Laughter to tears! Shaun of the Dead...LOL! Can't get enough of that one. James Blunt as an extra for the next zombie flick, I think so. (Did you know that Simon Pegg and dude that I can't remember the name of are extras in "Land of the Dead"?)

LOL I think Eva won the brinkmanship battle in the end.

Sarah: and then I found she had taped one of his eyes that she had cut out of the mask to the tv screen. The other eye and the mouth are apparently still in the game somewhere. I didn't know that the SOTD lads were in LOTD (which was a disapointing film).

Yes Ben, although I believe that our ceasefire was on a slightly smaller scale, but still carries the same amount of hope for peace with it.

That is a creepy mask. So why James Blunt? I'm out of the loop. Is he a regular guy you two make fun of?

Yikes! How absolutely terrifying I cannot stand James Blunt. Creepy little man. Bloody funny though - the pic of the mask made me snort with laughter! Hehehe :D

Neil, poor old James Blunt (who never did anything against us personally, other than sing a song we don't like) is just one of the many victims we make fun of on a regular basis. Are't you glad you are not more famous than you are?

And I love your new avatar, Jen! Planning any pranks with which to welcome Ayla home, or does she get enough throughout the year?

I was snorting at the mask a fair bit too, Kees, once I got over my heart attack at the sight of a demented James Blunt coming up the stairs.

Oh my God, you guys are frickin' hilarious. That mask was a keeper - Hallowe'en is just around the corner and you're all set.

We have a similar rivalry going on at the moment in this house (I'm neutral, thank God). My daughter plays Bright Eyes non stop, as loud as she can on her muffled speakers. My son HATES it, with a passion. He thinks Connor sounds like a horse being strangled (underwater), that's near death (his description, not mine). So his new thing is to rewrite Bright Eyes songs, which he sings everytime he's in her vicinity. It's fucking hilarious - he does great impersonations and this one's no exception. We'll see what develops here...

and the eye on the tv is the topper. Just when you think you've recovered, eh? Blunt II, The Sequel.

I have nothing to say re:James Blunt.He sings one song I like very much 'No Bravery' and one song I have heard too much you can guess that one...
I can't email out so I just wanted to say I posted on the joint blog a little something about the AIDS conference.

Karen - it's James Blunt! Made into a mask. Can you think of anything creepier? No offense to Mr Blunt - I'm sure he's very nice and all, but ...

Deb!!!! - "he thinks Connor sounds like a horse being strangled (underwater), that's near death" - oh lord that is the funniest thing ever. Your son kicks ass! (even though I don't really mind Bright Eyes). Keep me posted on this, please.
Blunt II, The Sequel - scarier than the original!

Barbara, I'm sure James Blunt appreciates your support, in a manner of speaking.

barbara, i'm with karen. i don't get it either.and i guess if you have to have it explained,there's no hope. i am just waaay out of the loop. however, i DID get to see neko case at wpg folk festival.in keeping with your james blunt bashing (poor poor man)
he is going to be in wpg on oct 31.

i did not mean to be anon, made a mistake. seriously, i do not get this james blunt thing. please clear it up for me.

Hi Berni - nice to see you and to have you weigh in on the James Blunt question. But to mention Neko Case and James Blunt in the same breath - blasphemy. You're just trying to remind me that Neko Case hates me and not you, aren't you? Tell you what, I'll call you later and we can discuss.

We do tend to foster evil at our place.

I wuff him. Remember when I sent you one of his first songs and you wrote back " I don't care for it". Hummmmphhh. You and Eva, I swear. You both outta be spanked. I still wuff him - send his poster my way (all apendeges in tact, of course)
xoxoxoxo

I know, Kellee, Eva and I are so mean. And now you can see just how far we are prepared to take that meanspiritedness.