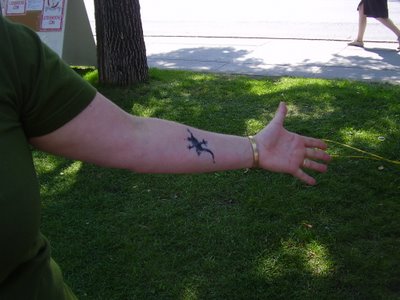 This little Zombie is way too tired and stupid to give you more than a sneaky peek at the Fringe goings on
- one lizard airbrush tattoo
- three pretty amazing plays
- one ice-cold beer given to me as a means of participating in "Drinking in America"
- four Marthas in one hotel room
- four Hunan noodle dishes ordered at one table
-six new cds bought at Megatunes (teehee)
- one suitcase that didn't get unpacked until after work today
- one alarm clock that went off waaay too early this morning
***details on these and more tomorrow***
When I got home yesterday, all Martha'd out, my sister and brother-in-law (who live 1,300 kms away!) were sitting at the kitchen table! I'm told I did the classic double-take head bob. Eva says I looked just like Kramer.
It was great to see them and we had a blast visiting, but we all had to get up way too early this morning, Berni and Bryan to drive to Manitoba, me to go to work (Jerry was smart and booked today off; Eva slept in till noon of course).
In my usual style, I didn't think to take photos till just before they left, so this morning I grabbed the camera and quickly shot off a couple of nice photos. But I forgot to check the setting of the camera and I guess I had it on video setting for some reason. So I've got a couple of 12 second videos of my sister and then the floor and then my brother-in-law and then the bottom of the fridge door. Great stuff. David Lynch, or maybe Cronenberg.
Posted by Barbara Bruederlin at 6:48 pm

Very David Lynch, good work! If you'd had the forethought to pop a creepy guy under the fridge you'd have a masterpiece on you hands.

LOVE the tattoo, cute little devil ain't he. Sounds like you had a GREAT time :D

Sounds like you had a great time...very cute tat. In all my tiredness I read human noodles, which didn't sound too appealing - had to go back and reread!!

ooh your Tattoo looks cool. I'd have loved to have seen the double take !

Nice Tattoo! Any chance of you making it permanent???

hahaha Kees, if I had the forethought I would have actually checked the camera setting first, but a fridge monster would have worked as well.

Human noodles would have fit right in with the zombie play, Deb, but these were actually much more mainstream noodles. Seven chilis, though!

I thought my head was going to snap off my neck, Ben. I didn't realise people actually do that Kramer thing when surprised, but I guess I did.

I don't think I'll make it permanent, Karen. While I love the idea of a tattoo, it would have to be something very meaningful to me (I don't want a tattoo just cause all the cool kids have them), and sadly, I have nothing meaningful to display.

Nice tattoo! That's a great place for one (I'm biased tho)
Sounds like you had an excellent weekend. I enjoyed the point form post, sometimes its just makes things easier!
BTW, the camera on video, sadly happens to me all the time.

Barbara, I'm loving the bullet points and bold words! I also like the gecko tattoo. I wanna hear about the cold beer at "Drinking In America"...=)

Lynch or Cronenberg - I'm down. Can't wait to hear more ... like those six cd's.

And you are a film maker, Allison! Oh I feel better already.
I really like that place for a tattoo. If I were ever to get one, that would most definitely be the place; it just seems right. I'm assuming you have one in that spot?
btw I totally ripped off the bullet point and highlighted idea from Hilary - don't tell her.

Oh hi Hilary!
I'm loving your idea for points and bolding which I stole from you. It's so much fun to do.
I shall, if not tonight, then definitely tomorrow, divulge the tale of drinkng beer with your famous American cousin.

You know what Will, I still have the shrink wrap on two of those cds. I know, shameful, isn't it? I shall fix that tonight and then tell you all about my finds.

LOL @ Deb, I thought I read "human noodles" too and had to re-read it.

I agree with Allison, that would be a great place to get a tattoo! And it's a really cute one too, maybe you should consider getting a permanent one! ;)

I like that tattoo too! I'm glad to hear you had such a fun weekend! Are you going to post some of the vid? I think that's so funny :)

Why not print up a bunch of temporary tattoos and replace it when you need it. You can even move it around as you need to. I don't get permenant tattoos. Is there anything I would want on my skin for a lifetime? No can't think of anything. Well maybe the freckles can stay...Sorry my personal rant here...
I have done the video setting by accident thing too. Not even sure I can do it on purpose...

I'm starting to feel like succumbing to peer pressure here, Alana. I have to admit I do like my little gecko and I feel totally bad-ass wearing a tattoo in to work, but...

You know, Mel, if I had the brains to figure out how to post that 12 second video, I just might. I'll have to confer with the 15-year-old in the house.

It is a rather bad-ass tattoo, Barbara, but that's always the thing about them. The smallest amount of doubt means no, even if you like the idea of it. I'm all for tattoos, I think they're an absolutely beautiful and meaningful artform, but there shouldn't be a single ounce of doubt about it. Or at least put it somewhere discreet so you know it's there and no one else has to.

Yeah, the sad thing is, I wouldn't know how to video on purpose either, Barbara W.
I can't think of anything I'd want forever either, so there's no point in me getting a tattoo.

I think tattoos are beautiful too, Alana, but nothing speaks to me, so... And if I ever got one, I'd want it noticeable, and I couldn't keep yanking my pants down in public, so butt cheek tattoos are out for me.

I have one on my wrist, so not as cool as the place on your arm, but I'm planing that place for my next one ;)
I'm always in favour of a little ink, but as you said, if it doesn't speak to you, there's not really a point.

Did it hurt, getting your wrist tattooed, Allison? So many veins and ligaments there.

No, it didn't hurt at all. The one on my inner ankle hurt more than anything. Actually, my nose ring piercing was probably the worst. It was winter when I got it done, and as soon as I stepped outside, everything froze. So not pleasant!

Oh oww, Allison, I would never have considered that.