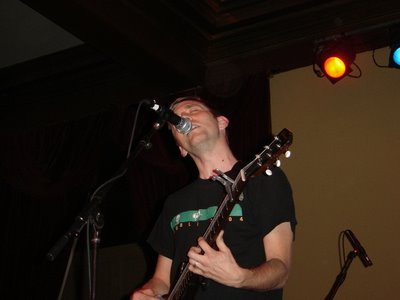 Look what Will found for me!!!
I had expressed a desire to see my favourite video in the whole world, the Weakerthans' Our Retired Explorer (Dines with Michel Foucault in Paris, 1961), and wouldn't you know it, Will found it and put it up on his most excellent site - New and Used Records.
You really need to run, not walk, over to Will's place to take a look at this amazing video.
It's got Weakerthans in fake fur coats, dancing on a frozen Lake Winnipeg, it's got a swinging penguin, and it's got John K Samson overcoming his fear of cameras to don a really cheesy moustache and put out a really outstanding example of wooden acting, as the befuddled hero.

And while you are at it, take the opportunity to peruse the rest of New and Used Records. You can thank me later.
Posted by Barbara Bruederlin at 7:41 pm

I've always liked "Our Retired Explorer". This video totally just made it better for me.

Despite the fact that it's supposed to be about Antarctica it seems so greatly Canadian.

I'd never see the video before, thanks (Barbara and Will) :)

I cannot possibly imagine how someone could have a fear of being on the giving end of a camera lens.

Bloody brilliant. I had a big toothy smile on my face all the way through it. The dancing actually made me feel all happy inside :}

Well done that man Will.

He's a leg end in his own lifetime.

Isn't it a fun video, Hilary? It does what a good video should, and adds a whole new dimension to the song.

It was filmed on Lake Winnipeg, John, which is a big lake, but it's no Antarctica. Pssst, the penguin is not real either.

You're the best, Will. You spoil me.

It's not the easiest video to see, Allison, doesn't get a lot of play on Much. I love it.

No, no, I don't imagine that a camera hog like yourself could relate to that, Michelle-whom-I-have-never-seen (not that that affects my adoration of you one iota).

The dancing is completely adorable, isn't it Kees? Makes me want to don a parka and go jump around on a lake. I'm so glad you enjoyed it too.

He is indeed a "leg end", Ben, at least around this house (much like yourself).

agree with ALL about the dancing. It made my day!

Seriously ... I think video requests should be N&UR's new thing.

That's a really inspired idea, Will! I can think of a pile that I'd like to see. I'll bet you'd get tons of requests.

strange it did not play for me... *sigh* could it be my Dlink? Other things play... wirelessness...

Oh that's such a shame, Barbara W. It plays okays for me. You tried playing it over on Will's site, right?