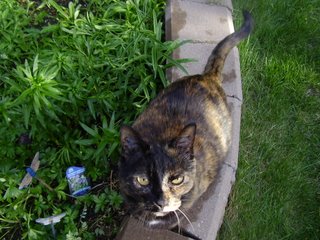 Don't mess with this one...

She doesn't meow; if she were to open her mouth right now, it would sound like this: " ".

But she is the best mouser I have ever encountered, she sleeps with me most every night, and she likes eating soap.

Tonight we had a huge rainstorm, so much so that our neighbour's basement flooded, and our back sidewalk sprouted a four inch deep puddle. The neighbour and his little boy were with us in our backyard, and Sputnik, who normally would have made a beeline for the house during a thunderstorm, instead had to show off her kahonas, and let the wee tyke know who ruled things around the neighbourhood, by attacking air bubbles while standing in the deepest part of the puddle.

Some just love an audience. Others love power.
Posted by Barbara Bruederlin at 6:59 pm

I got that rain too. I walked outside for 10 seconds and came in soaking. Yesterday I got caught in the rain and lightening when I was walking home. It was semi-tropical a couple days ago! The weather will always mystify me though.

I love your cat. She seems like she's quite the spunky little thing. I'm a cat person. Which is weird, because most people are dog people. And I think I'm semi-allergic.

That's great...she seems like the ruler of the backyard. You guys sure are getting a lot of rain this summer, is this typical weather?

Wasn't that lightning show amazing last night, Hilary? And no wind, which is great because I hate the wind.
She's got more fiestiness in her righ front paw than I do in my entire being. I think I'm semi-allergic as well. I wake up with my eyes leaking every morning after she sleeps with me. But it's worth it.

We go through extremes here Allison - drought for a week, then rain, and then you get the days where it boils, rains, snows, sunny, cloudy, freezes, boils again. It's completely stupid.

Man, you're getting all the rain that Winnipeg's NOT getting! We've been dry all summer. It sucks that you're getting THAT much rain though, it's hard to find anything that's shittier than that!

A cat that eats soap...maybe Sputnik would like that Thrills gum that tastes like an Ivory bar. Yuck!

Have to share the story of my cat Tibet (tibs for short). She was given to me by my mixed media instructor b/c she fought w/ their dog...apparently some bleeding occurred. She would roll down the stairs fighting with other cats, in the middle of the night. She ran away back to our old house when I moved and I had to kidnap her wrapped in a towel and keep her captive until she accepted the new place. But she was sweet as can be to me. I miss my cat she stayed in Nelson, when I moved back to the city. I am a CAT person, dogs are great...just not for me - I need a pet with independence.

What a dude! Love her. Cats are the best. My Rodney wouldn't know what to do with a mouse if it came up and jumped in his mouth but he'll catch a dragonfly and deposit it in our shoes :{

Cats are always so elegantly cool compared to dogs.

I have to say I'm a dog lover, but having had cats in the past, some of them have this kind of majestic powerful aura about them.

I'll bet the drought is keeping the mosquitoes under control though, Alana, if you'll excuse me being Little Miss Silver Lining for a moment. I actually really like rain; I often complain that it's too sunny here.
Ugh I remember those Thrills gums - they were horrid. Sputty might like them though, as Ivory is her favourite brand.

Tibs sounds pretty crazy, Sarah. The only time Sputty gets like that is when we have to take her to the V-E-T, oh I guess I didn't have to spell it as she isn't in the room...
Me, I love cats and dogs - I would have a great big German Shepherd or Golden Retriever as well if I could.

Rodney sounds like a lover rather than a fighter, Kees. Nothing nicer than a shoed dragonfly! Sputty LOVES dragonflies, I think because their wings are so light and crispy. And you know you can't eat just one.

Ben, they are full of aura. With dogs what you see if what you get, but a cat always holds its cards pretty close to the chest. Ohoh now I have an image of one of those black velvet paintings stuck in my head, of card-playing cats.

Cats are the best. I love them, love them.

And your cat is adorable too, Will. We need to see another picture of her, I think.

What a hilarious kitty!! My cat is very talkative, but sometimes what comes out is more a strangled sounding squeak, or sometimes a squawk than a "maow". I can just picture her attacking bubbles awwwww so cute!

Aren't cats great company, Mel? They think they're so cool and all, but they're really just big old goofs. Sputty has been following me around all day because I told her Eva was coming home from camp tomorrow.

And they say animals don't understand what humans say..HAH to that!!! :)

I was allowed to be in the company of this one cat who, as a kitten, feel into a toilet and nearly drowned. He never meowed, he made this funny 'chirp' thing that make him sound like a mouse... it was so freakin' funny! I love animals that have unique voices, or in the case of the grand Sputnik, lack thereof.

Oh that storm sounds divine, heavy rains are so cleansing. Except when they cause one's basement to flood, that's not so clean.

Oh you know they understand a lot, Mellowlee. Sputnik knows that her sister is coming home tomorrow and she is looking forward to Eva cleaning out her eye-boogers for her.

Oh the poor little mouse-kitten, Michelle! It probably never spoke again. Sputnik can meouw, she just has a very very quiet one and mostly she chooses not to.
I am with you on the rain thing, darling. LOVE IT!!!

She doesn't usually do the meow part, but she certainly does purr, Minty.

I LOVE this cat!