Does anyone want to go to a Hylozoists concert with me? My treat. 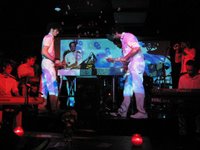 I'm serious.
I just found out Hylozoists are going to be playing at the Liberty Lounge at Mount Royal College (in Calgary) on Friday, September 22. Eva would love to go, but it's at a +18 venue, and Jerry doesn't want to go because we are going to see John Prine the next night, and that's too much concerting for the lad.
You would have to:
a) get to Calgary
b) be at least 18
c) be on your own the next night because I'm going to another concert

Let me know and I'll score tickets. I don't want to wait too long though, like I did with the upcoming Corb Lund / Elliott Brood concert. It's at a fancy-schmancy sit-down venue and by the time I went to book tickets, there were only singles left. Damn!

<< Look what I did score tickets for, though! The Frank Black, aka Black Francis, aka Charles Michael Kittridge Thompson IV concert in November!
Alas, I think that this is the closest I will ever come to a Pixies concert, but I sure would love to see Kim Deal's band, the Breeders, who are apparently planning a new album release next year.
She has got to be one of the coolest women in rock, alongside Kim Gordon.

***
We watched The Hills Have Eyes last night. We thought it was going to be a mutant zombie flick, but alas, it was strictly mutants. Not a zombie to be had.
We had a lot of fun with it, though, as it was quite audience-interactive. Well frankly, most films watched at our house become that way whether they want to or not.
The family that was ambushed by mutants had these two German Shepherds - Beauty and Beast. But I thought they were called Judy and Brenda, but it turned out that the teenaged daughter was the one named Brenda, which is all wrong because there are no teenagers named Brenda.
Nobody under the age of 40 is named Brenda.
However, Brenda the dog turned out to be quite the star of the movie. She must have killed as many mutants as Doug, the vaguely Matt Good-alike son-in-law.
Go Brenda the dog!

***
Speaking (kinda) of zombies, though, I got a lovely email from Joel Crichton, the playwright of Eat My Brain today about my review of his production at the recent fringe. It's so gratifying to hear back from the minds behind these creations.
Posted by Barbara Bruederlin at 1:45 pm

I wish I could keep up with the concert track out here. There is sooo much that I am not going to, I would mention them but I might cry. Still working on getting my girlfriend to go to Rancid with me.
Good luck on your mission to find someone to concert with, it shouldn't be too hard!

I know what you mean, Sarah, and it's not even Rocktober yet! You could spend all your time (and money going to concerts).

Good luck getting your friend to go to Rancid with you! How could she pass up an opportunity like that?

I Haven't seen The Hills Have Eyes since it first came out. Is it as weird as I remember? Maybe I should rent it :) I wish I lived closer. If I was still in the EK it would be so easy for me to get to Calgary!

It was a pretty weird film, Mel, and of course in our house we do everything in our power to make it weirder - we are not a passive audience.

I wish you lived closer too! That would have been so much fun to meet you and go concerting.

GAAAHHHH!!! First Hilary, now you. >.< I want to come to all these concerts! Curse being in school!

You always seem to make it to the coolest concerts, sigh, so jealous. But I take comfort in the fact that you write kick ass reviews afterwards. Otherwise, well it just wouldn't be fair :)

I want you to make it to these concerts too, Minty. Sadly, this one only old farts can attend (ie over 18) so it's not just school that's to blame.

I figured it would be too much of a good thing if you were able to make it to Calgary for this concert, Will. But it sure would have been fun to meet you and go concerting. I could have been your bodyguard.
I must have seen the remake of the Hills Have Eyes - it just came out recently. But dog flashbacks sound ever so cool! And mutants on motorcycles too!

Aww, I wish you could join me for this one, Allison. It would have been a blast. I may or may not go if I don't find a victim to accompany me, but it I go you can be assured that I will go on and on about it for days afterward.

Hylozoists. Sounds like a cult.
What kind of music do they play?
Not that I can get to Calgary on time. That offer is probably expired now in any case right?

The offer still stands, Barbara W!
Some of Hylozoists were actually on SLC this summer. They play instrumental pieces primarily and are made up of members of other bands, among them Cuff the Duke.

Check out their link - they've got some samples.

Cuff the duke eh... *shrugs*
Ha for a change I put a music clip on my blog. It's a song just for George... But I would love to share it with all of you.

Hylozoists ? Can you get ointment for that condition ?

Didn't Frank Black appear in the original "Hills Have Eyes"? I would have taken your offer to the concert if
a) I didn't live 10,000 miles away
b) I'm in Germany on a business course.

I'd have gone with you to the concert. No clue who they are but it would have been fun to meet you!

Not a Cuff the Duke fan, Barbara W? sigh - we sorta have opposite tastes in music, don't we? Oh well, I still like you anyway.

Ben, you recovered from Reading! It sounded awesome. I haven't had a chance to listen to your concert link yet, as my computer with the speakers is temporarily away from home.
There is an actor also called Frank Black. Didn't he do some stuff in X-Files or something?
If I make it to the Hylozoists concert, I shall be thinking of you, learning business in Germany, but I would much rather have you come concerting with me...

Oh you tease, Kees! Here I was all excited that you would come conerting with me, but you were toying with my emotions!

That would have been fun to meet up, Neil. I actually don't know much about their music either, but I want to find out more. Maybe next time...

LOL at Ben's remark. I first saw "halitosis" *giggle* j/k I am sure they rock if you like them Barbara! I am thinking of the Hills Have Eyes original too. I didn't know they made a remake! Goodness!!!

Halitosis would make a pretty decent name for a punk band, Mellowlee.

You know what, I didn't know there was an original the Hills Have Eyes, although the title always sounded familiar.

LOL Totally a great name for a punk band!!!!!
Here is a link to the original Barbara: http://www.imdb.com/title/tt0077681/
Check out the guy on the DVD cover. He is who I always picture when someone mentions the movie. He creeps me out BIGTIME!

That guy, although less mutanty than the ones in the remake is totally more bad-ass, Mel. And Wes Craven, well I don't know how I missed that film, but I really need to check it out! Thanks.