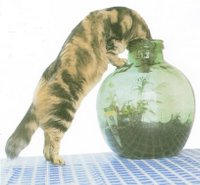 The curiousity is killing me ...

About a month ago, Eva won the Lost in Translation contest on Definitely Not the Opera for identifying the mistranslated lyrics of Joel Plaskett's True Patriot Love. They asked for her address and that was the last we heard of the whole thing.
I kept telling her to contact CBC, to use the same tactics I use at work when I want to hound somebody about getting something done without making it appear like I'm hounding them, which is send them an email asking "is there any more information you need from me in order to get this completed?"
But of course she never did.
And then today she left for camp, and guess what arrived in the mail? Her parcel from CBC of course. It's killing me not to open it, but I won't do that. But it's not a t-shirt, which is too bad because retro CBC t-shirts are all the rage right now. It feels like maybe a CD and a DVD.
Oh my god, what if it's Sook Yin Lee's porno movie that she just made. Well, I guess it's not actually a porno movie, but pretty close, from what I understand. We already have her cd.

The Constantines are supposed to be on some American tv show tonight, but I couldn't find it, but I did find this great footage of them playing in a hailstorm at the Sasquatch Festival this year.

Those boys don't let a little hail and driving rain keep them from rocking out. Check out keyboardist Will Kidman hanging from the rafters at one point. Literally. They've just got way too much energy for one little Canadian band.


Posted by Barbara Bruederlin at 7:11 pm

OMG! That video is wonderful! This is my song of the week now LOL!

The Cons are on Last Call with Caron Daily, its on NBC, after Conan (130am i think).
Is Sook Yin's cd good? I loved her as a VJ.

You are exercising some SERIOUS restraint not opening that package ... I'll surf my American television this evening for the Constantines.

I agree with Will, I would be ACHING to open that package!!

Allison, up Sook Yin on wikipedia for a dose of "wikiality" ;) I just did to find out what that was all about. *G*

getting back to a cleaner subject, LOL! I looove packages from the CBC even if I ordered it and I know what's inside. Eva is gonna be stoked!

They're set is almost drowned out by the sound of the rain at the start there.

I'll tell you what my mum would do...she would go right ahead and open it then when I came back she would say "oh well I thought I'd better open it because it looked like a...court summons/letter from the bank/something from work" regardless of the shape or size of said package.

LOL @ Sasquatch festival!!! Sasquatch is what I call myself when I'm in need of a trip to the leg waxing place...

Isn't it great, Mel? Young Lions was the first Cons song I ever fell madly in love with, and I still adore it.

You are an ace number 1 detective, Allison! Thanks for all the info. Naturally, though, I did not check the computer last night, but I hope you were able to catch the show.
Why didn't the Cons call the show by its real name on their site - the lazy bastards?

Although I am very curious about the package, Will, I've always been really weird about opening parcels. My favourite time at Christmas is before all the parcels are opened. I guess I like the anticipation best.

Yeah, Mel, that is a serious dose of wikiality - finding out about our sweet little Sook-Yin.

Sarah, I don't believe I've ever ordered anything from CBC, but getting a parcel from them - yeah pretty sweet. I was really stoked that time the Arts reporter came to interview me and parked the CBC van in front of my house. I felt as though I had arrived.

I know, Ben, I was worried the whole time that they were going to be electrocuted! And I didn't want to live in a world with no Constantines.

haha Kees - court summons! Happens a lot, does it? My mother-in-law is the same way. One Christmas she ripped open MY present in her overzealousness and then was all puzzled why someone would buy her that.
(I'm a little sasquatchy myself right now)

You're such a pig, Neil. And that's why I love you.

Barbara, you can do what my mom did, put the part of the parcel where there's "glue" under the steam and open it, and then you can close it and Eva won't know that you saw what's inside. But waiting for Eva to come back can be a better idea!

Your mom is sneaky, Evelyne! I think I'll just wait. I like surprises too!

It's good that you're not opening it though, Barbara. It may be a nailbiter, but this way both you and Eva can be surprised together. :)

Yeah, that's what I figure too, Alana (god I hope I never have to steam open any of Eva's credit card bills), save the surprise. Also I am an abysmal actor.

You are a wealth of information, Jacquie. I didn't know that Sook Yin had a part in Hedwig and much to my chagrin, I have never seen the film.
And yes, Shortbus was the film that's causing all the kerfuffle.